GET IN THE HOUSE, FATHER GABRIEL! 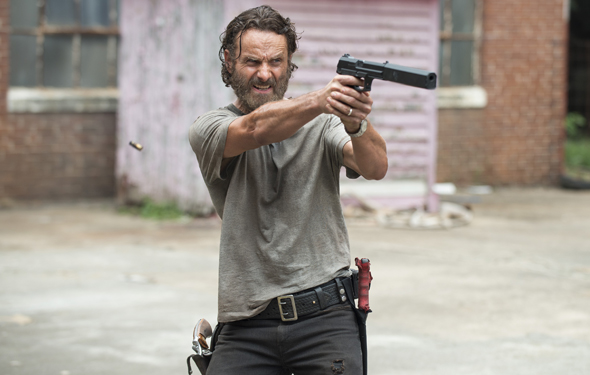 Sunday’s episode of The Walking Dead marked the last regular episode of the year before the mid-season finale, airing on November 30th. Though this episode certainly had its moments, it felt like this week’s episode was mostly laying groundwork for next week’s finale. As always, spoiler alert for those not caught up on The Walking Dead.

Meanwhile, Abraham’s group is still trying to recover from the crushing blow that the only thing beneath Eugene’s Tennessee Tophat is a bunch of lies, not a means to end the zombie apocalypse. Abraham is still shell-shocked in the center of the road, Eugene is still unconscious, and Maggie, Tara, Rosita, and Glenn are still trying to figure out a way to help Eugene while they plan their next move. I’ll be honest, despite this group taking up a lot of this week’s episode, there wasn’t a great deal that happened with this group in this episode. The group bonds, Abraham decides to keep on fighting, and Eugene seems to wake up, but that’s really it. Oh, and Tara finds a yo-yo. So there’s also that.

Back at the hospital, Beth works to keep Carol alive, using the key to the medicine cabinet Officer Dawn gave Beth in an act of rare, slightly suspicious kindness, and Rick and his group begin hatching a plan to rescue Beth and Carol. While Rick creates a plan that centers largely on “taking out” several of Dawn’s cops, Tyreese and Daryl suggest taking some of Dawn’s officers and offering up a trade. That way, as Tyreese and Daryl put it, “everybody goes home.”

Rick didn’t seem to love that idea, as I think after dealing with the Governor, Terminus, and then Gareth’s group of hungry, hungry hunters, he’s completely done trusting anyone. By taking out Dawn’s officers, she’d no longer pose a threat to him and his people. I suppose you can’t really blame ol’ Rick for his trust issues at this point. However, Rick decides to align with Tyreese’s and Daryl’s plan.

Unfortunately, taking a few of Officer Dawn’s cops didn’t turn out to be as easy as the group originally thought. So while things get a bit messier than they planned, Rick and his group were able to capture two of Dawn’s police officers thanks to some, ehrm, eye-popping quick thinking from Daryl. I mean, Daryl is completely a badass, but I’m going to let you Google a picture or a gif from that scene yourself, because trust me.

While all of this is happening, Father Gabriel is having a bit of a Lady MacBeth moment back at the church, furiously attempting to scrub away the blood splattered on the floor of his church. Carl brings weapons over to Gabriel, and tells him to pick one. As Carl tries to teach Father Gabriel to fight, and attempts to impart the importance of being able to defend yourself in this world—and also explains the varying levels of walker skull softness—Father Gabriel gets woozy and goes to his room to lie down.

…or so we thought. After Michonne stops by to try and encourage Father Gabriel to learn to fight, and that this new world isn’t all bad, we see that our cowardly clergyman is actually attempting to literally burrow his way out of the church. Because, you know, it’s probably a great idea for a dude who is too freaked out to even speak about killing a walker to set out on his own. Father Gabriel is able to get out of the church, but he’s outside for about two seconds before he steps on a nail, probably giving himself a hella case of tetanus. Injured but determined, Gabriel limps off to find his own way.

How the tables have turned when Carl stays in the house and an adult wanders off.

Of course, the actual interaction with Officer Dawn’s hospital doesn’t happen in this week’s episode. The episode ends when the cruelly named Officer Bob endears Sasha to him, and then betrays her by bashing her head against a window and escaping.

Like I said, this episode was mainly laying the groundwork for next week’s finale. Rick’s group is still planning their rescue of Beth and Carol, Abraham’s group is still stuck in the middle of the road, Michonne’s group is holding down the fort, and Father Gabriel is limping off somewhere, either being actively eaten by walkers or dying of whatever nastiness he gave himself when he stepped on that nail.

Next week promises to be a bit more exciting, as Rick will finally confront Dawn. I’m also hoping Abraham and his group finally start moving away from their new campsite in the middle of the road—am I the only one nervous about how close they are to a giant herd of walkers??—and who the heck knows what is going on with Father Gabriel, but hopefully we’ll get a bit more info on what’s going on with him.

I should also just mention Chris Hardwick announced next week they will have “surprise guest” on Talking Dead. Though he promises us that it doesn’t necessarily mean anything, we all know what a surprise guest on Talking Dead signals. So get your hearts ready for some (potential) heartbreak, TWD Family, and let me know what you thought of this week’s episode in the comments!