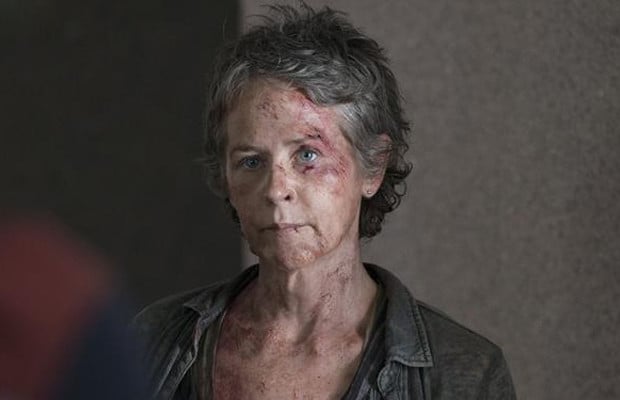 If you aren’t caught up on The Walking Dead, be warned, there are spoilers ahead!

I was so ready for this episode. After last week’s episode focused solely on Abraham’s DC-bound group–which was a special type of frustrating considering considering the episode from the week before last, “Slabtown,” ended with Carol being wheeled, unconscious, into Beth’s hospital–I was chomping at the bit for this Carol and Daryl-focused episode. Unfortunately, despite what all of the previews made us believe, this episode really didn’t advance the plot at all.

Despite the lack of plot advancement, we did get a closer look into the amazing Carol. Much like “Self Help” last week, this week’s episode offered several flashbacks peppered through the episode to help us fill in some blanks of Carol’s story after Rick kicked her out of the prison. We saw her on her own after Rick kicked her out, we saw her return to the prison after the Governor attacked it; we saw her on her way to Terminus to save Rick and everyone else; we saw her burying Mika and Lizzie; and we saw her after she burned the bodies in the prison. Basically, it drew a very clear picture of Carol. She’s strong, she’s tough, she can take care of herself, and she’ll do just about anything for those she cares about–even if it is hard to tell what is the truly right thing to do. Despite the large amounts of love I have for Carol, it was obvious that she was really struggling to figure out who she was. After literally putting down a child and killing and burning members of her own community, was there even any Carol left? Despite Rick and Daryl’s attempts to reconcile with Carol, it’s been obvious that Carol has been really struggling with starting over and rejoining “normal” life. Thankfully, Carol didn’t have to process those questions alone.

After Daryl jumped in with Carol to chase down the car with the white cross on the back, the two are able to track it into the heart of Atlanta, which has been completely overrun by walkers. They end up hunkering down for the night in a former women’s shelter that Carol and her daughter had stayed in during an ultimately unsuccessful attempt to leave Carol’s abusive husband. It’s obvious Carol is having a tough time being back at the shelter, and it doesn’t take long for Daryl to remind us why we love him by stopping Carol from putting down the reanimated corpses of a woman and her young daughter (which probably feels a bit too familiar to Carol) in next room. When Carol wakes up the next morning, she finds Daryl burning their bodies.

Things are pretty messed up when the reaction to a man burning zombies is, “Oh, how sweet,” amirite?

Despite being alone together and Daryl being an absolute darling, nothing happened between Carol and Daryl. In fact, this episode was chalk full of almost-moments between the two of them, and each time they were interrupted by Worst Timing Walkers.

Caryl frustrations aside, the hunt for Beth continued, ultimately leading them to Noah, who wins the Stupidest Decision of the Episode award by choosing to rob Carol and Daryl. He steals their weapons (including Daryl’s crossbow), and unleashes a few walkers to slow Carol and Daryl’s retaliation against him. Carol aims her gun at Noah–she says she only planned to shoot him in the leg–but Daryl stops her, and they lose Noah. Despite this being the apocalypse, and despite all that Carol has had to do and has chosen to do, Daryl spends most of the episode reminding her–from stopping her from shooting Noah to taking out the mom and daughter walkers in the shelter–that they aren’t lost, that they “ain’t ashes.” There is a lot of pain in this new world, but it doesn’t have to destroy them. Daryl’s ability to remind Carol of this while hardly speaking is one of my favorite things about him.

After they lose Noah, Carol and Daryl stumble across a van precariously perched at the edge of a bridge, and Carol and Daryl hop in to search for clues of where the van came from. Unfortunately, a herd of walkers approaches, pins them down, and forces them over the side of the bridge. Happily, the van lands on its wheels (physics and gravity are clearly Caryl shippers, protecting those two like that), and they are able to get to safety.

As they get closer to the hospital, Carol and Daryl’s path crosses with Noah’s yet again, as Noah is fighting off walkers. Noah nearly causes Carol’s death as he tries to get away from Carol, Daryl, and walkers, which kind of sends Daryl over the deep end. Daryl pins Noah under a bookcase, making Noah a sitting duck for an approaching walker. However, unlike their first meeting, Carol doesn’t let Noah die (or try to shoot him). She calls after Daryl, telling him to save Noah, and Daryl ultimately does.

Can I just say that Carol and Daryl are so perfect together? They have a seamless, effortless way of working together, supporting one another, and pushing one another to become better. I know that, up to this point, couples who aren’t Glenn and Maggie die in tragic ways, but I’m so ready for Caryl to become canon.

But I digress. Like I said before, this episode didn’t really move the plot along. Things didn’t really start happening until after Noah is saved. A car from the nearby hospital approaches to check out the noise from Noah’s scuffle with walkers, and Noah lets Carol and Daryl know that he came from the hospital, he knew Beth, and that she is still in the hospital. As the trio starts to head out toward the hospital, Carol is hit by the hospital car. The Hospital Creepers scoop her onto a gurney, and head back with her in tow. Noah stops Daryl from chasing after her, promising that the Hospital Creepers can help Carol recover from her new injuries, and after she is better, he and Daryl can save both Carol and Beth. Noah warns Daryl that the hospital has a lot of people and guns, but Daryl tells him, “So do we.” They steal a truck and head back to the church.

So while it turns out the theory I presented two weeks ago about Noah being Daryl’s mysterious companion in “Four Walls and a Roof” is accurate, Carol is, sadly, not a Trojan Horse. Still, with Beth and Carol under the same roof and Daryl bringing Rick and Michonne to the hospital, I’m going to bet creepy Officer Dawn and her hospital friends are in for a world of hurt. Of course, if this episode and last week’s episodes are any indication, we might not get a great deal of plot progression in the two episodes left prior to the mid-season hiatus.

What did you think of this week’s episode? Are you happy that Noah has teamed up with Daryl? Do you think Carol will pull through from her injuries? With Beth and Carol escape? Any theories on what the heck is happening with Morgan (we haven’t forgotten you, I promise)? Let me know in the comments!