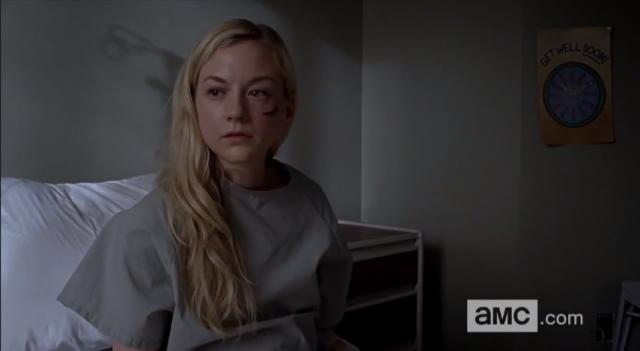 If you haven’t had a chance to check out my recap of last week’s episode, “Four Walls and Roof,” be sure to do that. And if you aren’t caught up on The Walking Dead, be warned, there are spoilers ahead.

Sunday’s episode finally, finally let us in on what happened to Beth after she was taken. It also managed to present one of the creepiest communities we’ve seen in quite a while, and that’s saying something considering the past two episodes featured a city of cannibals and a small camp of hunter-cannibals.

The episode kicked off with a scene reminiscent of the series premiere. Beth wakes up in a quiet hospital room. She looks outside, and sees that the city outside (Atlanta) is completely destroyed. After yelling for someone to let her out of her hospital room (which is kind of a bad choice–walkers could have totally overtaken her), she is met by Officer Dawn Lerner and Dr. Steven Edwards. They let her know they saved her life, that she is going to be okay, and that she owes them.

That’s never a great thing to hear in a post-apocalyptic world. To work off her “debt”–a debt Beth racked up by being “rescued” by a group of randos who literally snatched her off the street, which some would call kidnapping, but whatevs–Beth helps around the hospital.

There are a few preliminary red flags at the start of Beth’s time at the hospital. Things like a creepy police officer acting incredibly predatory towards Beth in the cafeteria, Officer Dawn slapping Beth when Dr. Edwards says it will be nearly impossible to save a man the scouts found on a run, and when Beth’s new friend Noah tells her he has never seen someone work off their debt and walk out of the hospital freely. Then things start to get really weird really quickly when a resident of the hospital, Joan, attempts to escape, manages to get bitten, and requests death over a continued existence in the hospital (namely, with Officer Creepster). Then there is also the creepiest cop of the year, Officer Gorman, who does stuff like says he wishes Beth was “his,” and force-feeds her lollipops.

So, you know, just a couple of red flags.

It doesn’t take long for Beth to realize that the only way she’ll get out of the hospital is if she escapes, so she and Noah hatch a plan to escape which hinges on Beth retrieving a key from Officer Dawn’s office. As she is rooting around for the key, Beth discovers Amber’s recently dead body (from apparent suicide) in the office. When Officer Creeper Gorman discovers Beth attempting to steal Dawn’s key, he offers to keep quiet about the entire encounter if Beth lets him have his way with her. Thankfully, before anything can really happen, Beth smashes Gorman over the head, and the newly-reanimated Amber chows down on Gorman. I can’t say I was upset at Gorman’s demise.

Noah and Beth are able to get out of the hospital, but ultimately only Noah is able to escape. However, Beth does not seem too worried to be left behind.

In this episode, and in the episodes Beth spent with Daryl leading up to her capture, we really got to see her grow and become stronger. She’s not even remotely similar to the girl who wanted to end her life back at Hershel’s farm. Now she’s got a great amount of fight in her, and a strong will to live–or at least go out, guns blazing. In the last few moments of the episode, she grabs a pair of scissors and walks toward Dr. Edwards, clearly intent on killing him and anyone else she could get her hands on. Just as she’s about to unleash hell, a new patient is rolled in, derailing her plans, because it turns out that the new patient is quite a familiar face.

I can’t help but wonder: is Carol really injured, or is she faking it? My favorite theory about is that Noah happened upon Carol and Daryl, let them know about Beth, and they sent Carol in as a sort of Trojan Horse to get Beth out. In the meantime, Daryl went back to the church to get the group, Noah in tow. That would explain the awkward “come on out” with which Daryl ended last week’s episode.

Unfortunately, it doesn’t look like we’ll get the rest of the story next week. Instead, it seems we’ll be following Abraham, Eugene, Glenn, and Maggie. The episode looks intense, certainly, but I mean, come on, we’ve got Badass Beth and Kill ‘Em All Carol in the same hospital. Things are going to get REAL when Carol wakes up. Do we really have to wait at least two weeks to figure out what happens next? I’m not sure my body can take it.

What did you think of the episode? Do you think Carol is actually injured, or is she a Trojan Horse? Let me know what you think in the comments!