The Walking Dead Recap: Four Walls and a Roof | The Mary Sue

The Walking Dead Recap: “Four Walls and a Roof” 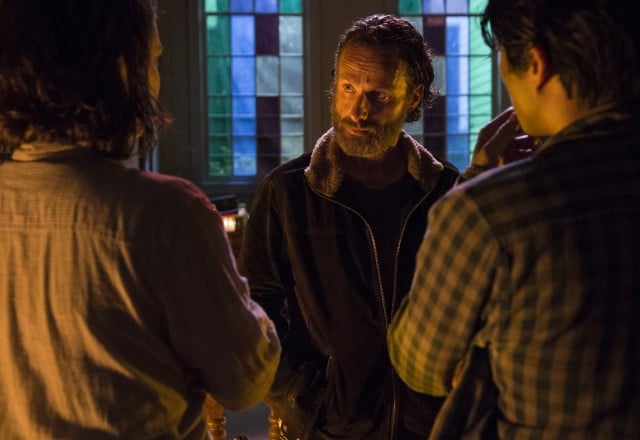 If you aren’t caught up on The Walking Dead, be warned: spoilers ahead! Also, be sure to catch my recap of last week’s episode, “Strangers.”

The big question from “Strangers” was answered almost immediately in this week’s episode, and the answer was, “Yes, Bob was bitten in the food bank, so Gareth and the Termites were eating, say it with me, tainted meat.”

Despite Gareth’s lack of concern of infection (apparently you can cook the zombie virus out of meat, so there’s that culinary tip for ya), there was still the issue of Bob’s imminent change to a member of the undead, so the Termites returned Bob to the church before things got too dangerous.

Back at the church, Sasha and Rick start to become suspicious of Father Gabriel. They didn’t start losing people in their group until they met Father Gabriel, and pairing that with the friendly reminder “you will burn for this” scrawled on the side of Gabriel’s church, the cowardly clergyman looked awfully suspicious.

Turns out the cowardice we saw last week when the gang first met Gabriel was no act. Father Gabriel really was and is that helpless against walkers. He had been riding out the zombie apocalypse penned up in his church, never opening the doors for anyone, even friends as they screamed for help while walkers overtook them. So after all of those red flags we saw last week, it turns out Father Gabriel is only dangerous because he is a tremendous, epic coward. Really though, in the face of a roving band of vengeful cannibals, a coward doesn’t seem too bad, amirite?

Shortly after learning of Father Gabriel’s true nature, the group discovers Bob on the church’s front lawn, and things start heating up immediately. Despite agreeing to accompany Abraham and Eugene to D.C. last week, Rick tells Abraham he wants to stay to take care of the remaining Termites and wait for Carol and Daryl to return. Of course Abraham is not okay with this, calling the current environment too dangerous for Eugene, and he tries to leave immediately. Ultimately the decision is made for Abraham and Eugene to stick around for 12 more hours, help Rick fight Gareth, and then they’d leave, taking Glenn and Maggie with them because…Glenn said so? To be honest, we weren’t given a good reason for Glenn and Maggie’s choice to leave, which kind of made their decision that much more challenging to accept.

However, we weren’t given too much time to dwell on Glenn and Maggie’s choice. With Sasha trying to cope with Bob’s imminent death and Rick planning an attack on Gareth’s camp, the choice to split up took a bit of a back seat.

After a plan is hatched to destroy Gareth’s camp, Rick leads a small group away from the church to go and find Gareth. Almost immediately after they leave, Gareth and his team sneak into the church. At this point, I was practically yelling at my TV. I felt like Rick had just fallen for one of the most obvious traps in the history of time. Luckily, I was wrong.

Upon entering the church, Gareth is able to name every person hiding in the church, including Judith, offering to spare Father Gabriel and Judith if Father Gabriel gives up their hiding spot. Just as Judith cries, giving their spot away, Rick’s group bursts back into the church and takes out everyone on Gareth’s team but Gareth himself (because Rick “didn’t want to waste the bullets”).

Gareth tries to explain how the group became cannibals (they were, like, super hungry), he promises he’ll stay away from Rick for the rest of eternity, and he generally tries to convince Rick to spare his life. Just as I started to fear that nice Sheriff Grimes would show mercy and let Gareth go, the camera gave us a glimpse of a red handle in Rick’s belt.

You remember Rick’s machete with the red handle? The one from Rick’s weapons bag Gareth tried to take back on Terminus? The machete Rick promised to retrieve and then kill Gareth with? Yes. That’s the one!

Rick went full Ricktatorship, hacking Gareth to bits, right there in the sanctuary of Father Gabriel’s church. It’s episode three, and Terminus, Gareth, and the hunters have been eliminated. Just like that.

Of course we didn’t get to take comfort in victory for too long, as Bob was moments away from death. Before he died, Bob was able to get in a few moments of wisdom, telling Rick that things had to change, and that all nightmares would end, saying you couldn’t look at Judith and think thing would never get better. He was also able to break our hearts a bit more by telling Sasha about a dream he had where she was smiling at him, explaining that he didn’t tell her he was bitten because things would have become “all about the end” and he was really enjoying the middle…and then he died. Just as Sasha was about to tearfully put him down before he could turn, Tyreese walked in and took care of Bob for her, breaking his no-killing rule.

So basically, just as everyone fell in love with Bob and Sasha, the showrunners had Bob bitten, captured by Gareth, eaten a little, and then killed—taking a bit of Sasha’s heart with him, and forcing Tyreese to break the one rule that was keeping him sane.

The show ended with Abraham loading up the bus (Glenn and Maggie in tow) and heading out, leaving a map of their planned route with Rick, and just about the sweetest apology note ever:

But most importantly, in the last moments of the episode, Michonne stumbles across Daryl in the forest. She asks him where Carol is, Daryl makes a face–was it a face of sadness? Anger? Confusion?–looks over his shoulder and says, “Come on out.”

AND THEN THE EPISODE ENDS.

Was Daryl talking to Carol? Was he talking to Beth? Why would he have to tell either one of them to “come on out”? Wouldn’t they have been comfortable enough with the group to walk right up to Michonne? Was Carol maybe towing B eth’s dead body? Was it a complete stranger? Was it Morgan, who we haven’t seen since the beginning of episode two?

I HAVE NO IDEA.

Though every episode is ending on a serious cliffhanger, I can’t help but notice how this season is moving incredibly quickly. Terminus was wrapped up in an episode. Gareth and the hunters arc was done in an episode and change. After long-running villains like The Governor, I’m really surprised how quickly Rick and the gang are cutting down those who oppose them. I’m even more surprised at how well things are hashed out. With the exception of Glenn and Maggie’s decision to leave with Abraham, I feel like they are telling very complete stories, despite their quick resolutions.

There are still some very big questions going into next week’s episode, and from the looks of the teaser, we’ll finally get some information on what happened with Beth. Judging by the speed of these other storylines, we’ll probably have most of our Beth-related questions answered by this time next week. What did you think of this week’s episode? Are you a fan of how quickly they are moving through villains this season? What do you think happened to Beth? More importantly, who was with Daryl? Sound off in the comments!
Kendall is an editor and a writer. She has a geek and pop culture blog, she is a seasoned Netflix binger, a hoarder of candles, still an unabashed Hanson fan, and she takes ballet twice a week to stave off some of her clumsiness. You can find her on Twitter, Tumblr, Facebook, Pinterest, Instagram, and Google+ (yes, she is actually on Google+).