We'll finally get to see how we went from crazed booby-trap guy to Zen master. 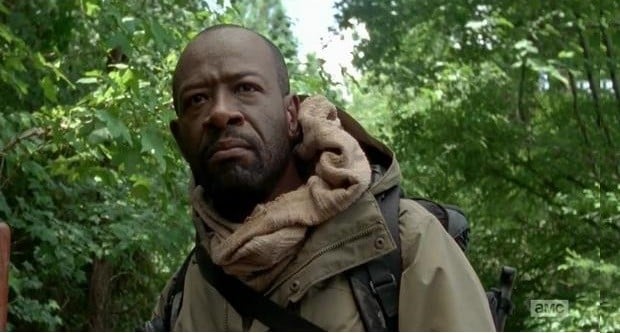 We’re barely back in the world of The Walking Dead, but we’ve already been given some hints as to what we can look forward to in season 6.

One of the most fascinating aspects of the new season thus far has been the ever-evolving relationship between Rick Grimes (Andrew Lincoln) and Morgan Jones (Lennie James), who have certainly flip-flopped back and forth over who gets the title of Guy With The Most Issues on any given week.

These days, it seems like Morgan is edging out Rick in terms of relative sanity—and Walking Dead showrunner Scott M. Gimple originally confirmed at SDCC that we’d be going back in time to learn about Morgan’s journey. “Something happened in the middle of all of that. And we really do need to show [it to] you.”

Gimple was actually writing the bulk of the episode from San Diego Comic-Con—to the point where he couldn’t even enjoy much of his con experience! In an Ask Ausiello column on TVLine this week, he said the sacrifice was totally worth it: “Working on that episode was one of the great pleasures of the season for me.”

Morgan has always been a fascinating character to me, and frankly I’m looking forward to the fact that the show will be spending time exploring those missing days that separated his and Rick’s first reunion with the second. The first episode did some really great things with its timeline, and this flashback episode is going to be a wonderful addition to that.

(via TVLine, image via AMC)