But seriously, did Rick really need all of those band-aids? 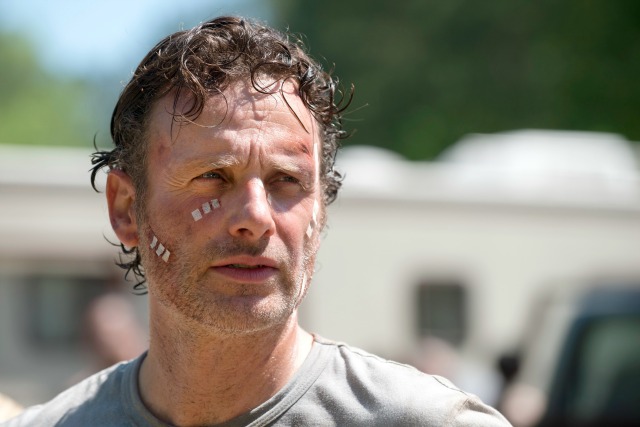 SPOILER WARNING! If you haven’t seen the season 6 premiere of The Walking Dead, read on at your own risk!

It’s been a long hiatus, and after the weeks of Fear the Walking Dead, the show’s spin-off that’s received mixed reviews, it’s nice to be back with Rick and the original gang. For a refresher on the season 5 finale, last season ended rather explosively, with Jessie’s abusive husband and resident porch dick, Pete, killing Deanna’s husband, Reg. Deanna gives Rick the green light to kill Pete, which Rick does without any hesitation at all. That moment is, of course, right when Morgan comes on the scene.

When we arrived back at Alexandria in the season 6 premiere, we find Rick calling the shots, acting as hardcore as when we saw him in the latter episodes of season 5. This episode is structurally different than most, as it bounces back and forth through time, showing flashbacks in black and white. The flashbacks start essentially the moment after Rick pulls the trigger to shoot Pete, and end with a mysterious horn blaring to derail the group’s attempt to address the issue of an enormous horde barreling down on the faulty walls protecting Alexandria.

The flashbacks largely center around the tension back at Alexandria. Several Alexandrians are very unsettled with Rick’s new role among the community, especially after shooting Pete, and they decide that they need to develop a plan to overthrow Rick. The group of dissenters is led by a man named Carter, played by the one and only Ethan Embry. Carter decides that the only way to make Alexandria safe again is to take out Rick, and he leads a group of people to try to develop a plan to kill our favorite sheriff.

Understandably, the shift in power has been tough for Alexandrians. Deanna is noticeably stepping back as she mourns her husband, and Rick has picked up the reins in her stead. His leadership is quite different from Deanna’s.  We get an interesting look into Rick’s view of life when he is confronted with Carter’s plans to kill Rick to reclaim Alexandria. Eugene, our favorite fake scientist, mullet-wearing eavesdropper happens to overhear Carter’s plans. Being the master of stealth and grace, Eugene drops a jar, falls backwards, and knocks over a shelf. Carter’s compatriots worry that Eugene heard their plans, and when Carter becomes sure Eugene heard, he points a gun at Eugene. Happily, not a hair on that Tennessee Tophat is injured, as Rick walks in right then. Rick disarms Carter, points the gun at him, but ultimately lets Carter live. When Morgan talks to Rick about it later, claiming that killing Carter in cold blood simply isn’t who Rick is, Rick explains that he very much wanted to kill Carter. It would be easier. There wouldn’t be drama or questions. However, he ultimately let Carter live because Carter was simply unable to understand the reality of this new life: that it didn’t matter what Carter did or didn’t do, he’d ultimately end up dead. It didn’t matter how much you fought, how good or bad you were, ultimately this new world would claim your life.  Though that’s a pretty bleak outlook, it gives a lot of method to Rick’s madness. He’s worried about surviving, today, as best he can because he knows that his days are severely numbered. It’s sort of a bleak, post-apocalyptic, full-Shane, no-nonsense sort of carpe diem attitude. Ultimately, he lets Carter live because he knows Carter is just going to die anyway.

The thing about Alexandrians is that they are incredibly inexperienced when it comes to surviving outside the walls of the safe zone. So once Rick is made aware of the impending threat with the faulty wall and canyon-walkers, he decides to remedy the situation rather than simply building the walls higher as Carter suggests. It becomes clear that Rick’s plan will force these inexperienced Alexandrians to have to go toe-to-toe with some walkers. This was where the time jumping become cool to watch. You’d see Carter and his followers dissenting against Rick’s plan to take care of the walkers, and then they’d jump forward in time to show you everyone working together to corral the walkers. You’d hear Maggie processing the attempt Nicholas made on Glenn’s life, and Nicholas’s role (responsibility, really) in Noah’s death, and then you’d jump forward to see Nicholas jumping in to kill a walker to protect Glenn and the others. Carter plots to kill Rick, and then he’s fighting by his side, shaking Rick’s hand when he sees Rick’s plan works. Using the time-jumping, the episode was able to zoom through character development and reconciliations much more quickly. I’ll be honest, after the “slow burn” feel of Fear the Walking Dead, I was primed and ready for a show to start out with a bang and keep on running.

The time jump was the most effective when it came to Carter. After Rick’s talk with Morgan about the brevity of Carter’s life, we jump forward to see Carter wielding a gun, volunteering to take out walkers. Unfortunately, he doesn’t get through many walkers before one takes a giant chunk out of Carter’s face. Carter, understandably, freaks out, screaming at the top of his lungs. It’s as if Carter is not only in large amounts of pain, but he’s also shocked that his life is about to be over. Rick ultimately comes over, tries to calm and quiet Carter, and ultimately kills Carter before he can turn. Rick, Michonne, and Morgan all have a moment of being sad (though, I’ll be honest, I’m unsure how sad Rick really was), and accepting that this sort of loss is simply a reality in this world. It’s like Rick said, ultimately, you’re just going to die.

Despite the loss of Carter, the plan to corral the walkers is largely going as planned. That is, until a horn begins blaring somewhere off in the distance, diverting the attention of the walkers being corralled. The camera pans out to show how GIANT the horde is, and how they are all heading towards the noise (which is presumably coming from the general direction of Alexandria). Of course, that’s when the episode ends.

Ultimately, it’s a great way to kick off the season. They managed to move the story forward from the season 5 finale pretty easily, and they gave us just enough of a taste of what was happening with Alexandria citizens. It was also PACKED with zombie gore as the group dealt with the herd in the canyon–I think this is the largest herd we’ve seen since season 1 in Atlanta. There is most assuredly no “slow burn” happening here.

Some parting thoughts I had on the episode:

What did you think of the series premiere? Let me know your thoughts in the comments!