The Tupac Hologram and Our Fascination With Resurrection 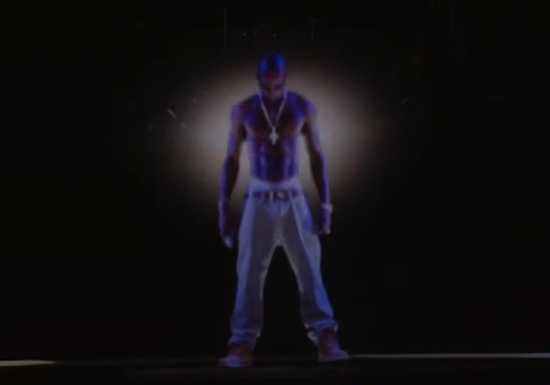 Closing out this year’s Coachella festival was a surprise performance by none other than a hologram of Tupac Shakur, a pairing of concepts I think most people had never imagined prior to yesterday. The rapper’s appearance was shocking not only because of the holography, but because Shakur was famously murdered in 1996.

According to MTV, The Tupac Hologram was the brainchild of Dr. Dre, who also performed at the festival. However, it was Nick Smith and his company AV Concepts that put the hologram on the stage. The CG rendering of the dead rapper (complete with superhuman abs) was created by the special effects company Digital Domain.

The performance is believed to have been created thanks to an optical illusion aptly called “Pepper’s Ghost,” where a projected image is bounced onto a thin, nearly invisible Mylar screen angled over the stage. AV Concepts used a similar technique during the 2006 Grammy awards, and allowed Madonna to dance with the animated band Gorillaz. (For those interested, a breakdown of how the trick works can be seen here.)

The Tupac Hologram put on an eerie performance. When it appeared, the crowd became noticeably quiet while the show continued, so achingly aware of its strangeness. The CG simulacrum even declared “I’m a ghost” during a rendition of “Hail Mary.” The ghostly, semi-transparent image went on to do two more numbers – one opposite a likely perturbed Snoop Dogg – before, no kidding, dissolving into triangles in a blaze of otherworldly light.

While I must confess ignorance to the life and body of work of Tupac, the resurrection obsession is part and parcel of the music industry. We can get specific: Back in 1995, the surviving Beatles recorded two new tracks along with unreleased demos recorded by John Lennon in 1977. Lennon had been dead since 1980. For his 75th birthday in 2010, Elvis Presley netted $60 million despite having been dead since 1977. Deceased in 2004, Ol’ Dirty Bastard still managed to appear on 2009’s “Blackroc,” a rap album put together by the Black Keys.

Though resurrections are a phenomenon that is particularly common in the music industry, it’s notable that CG recreations of dead actors haven’t broken into mainstream film. Perhaps it’s because fooling the ear is easier than fooling the eye.

Posthumous musical careers are clearly not unique to Tupac, but Shakur’s has been particularly lively. Since his death, seven albums have been released under the rapper’s name. For Forbes’ 2002 edition of the magazine’s annual list of top-earning dead celebrities, Shakur came in at number ten. A 2003 documentary about Shakur’s life, titled Tupac: Resurrection, was narrated entirely by Shakur. From 1997 on, Shakur has made 49 guest “appearances” on the tracks of other recording artists.

All of this is not to mention the rumors held by some ardent fans that Shakur is, in fact, still alive and in hiding somewhere. With all that in mind, it’s not really a question of why the Tupac Hologram exists, but why it has taken so long.

Despite the seeming inevitability of the Tupac Hologram, there is something particularly disturbing about it. True, these kind of hologram performances are inherently weird. However, there is a big difference between watching the entirely fictional Gorillaz and the recreation of a dead man, especially when that dead man performed a song with a living, breathing man (Snoop). The creators of the spectacle even created new audio for the performance – unless Tupac was prone to shouting “Coachella!” during his life.

Beyond that, the Tupac Hologram is most distressing as it’s an entertainer completely stripped of its humanity. When a singer is on stage,  he or she is mostly their celebrity, with their humanity tucked safely away for later. At home, they are someone else, but on stage they fill a role assigned to them by their fans and perhaps by themselves. Some take it to an extreme – Ozzy bit the head off a bat. For others, it’s subtle – Roy Orbison’s dark glasses, for instance.

Once you’re dead, your past is fixed and frozen. After they’re safely entombed, the dead are polished and prepared for posterity; reshaped and remade by fans and loved ones into legends. When we bring them back, with unreleased tracks and holograms, they look better than ever (seriously, those CG abs) and sound like never before.

Perhaps we do it because we want to believe that its a trick we can pull off on ourselves. That we can be immortalized, loved, and rewarded long after our best days our behind us. That we can be young and vibrant again – what’s a few bullets to a dancing hologram?

When we look into the Tupac Hologram, we see ourselves reflected brightly on a thin Mylar screen.