The Origin of Easter Eggs — The Digital Ones

It should come as no surprise that the concept of a digital or virtual “Easter egg,” or a hidden link, message, feature, etc. embedded into a form of media, has a geeky history. Not just geeky, but vintage geeky — as in 1979 Atari geeky. Do I have your attention? And no, there are no Easter eggs before the jump. I’m not technically-inclined enough to work that kind of sorcery.

One of the first occurrences of what we know now as an Easter egg appeared in the Atari video game, Adventure, planted there by computer game developer Warren Robinett. It wasn’t too fancy or interesting, just a hidden object planted in the game that led to a screen that said “Created by Warren Robinett.” Why would he go through the trouble? Because back in the early days of video game development, Atari didn’t give credit to its designers in the games themselves. So Robinett took a little hacky initiative. Here’s a screen cap: 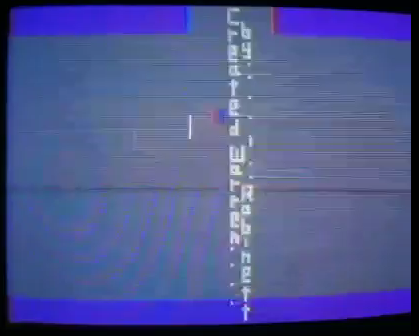 Since Robinett made his claim, other digital Easter eggs have emerged in even earlier media, namely the Fairchild Channel F console, which was made in 1976. In the demo game that came with the system, hitting the 1, 2, and 4 buttons simultaneously at the end of the game would make the name of the programmers, Michael Glass and Brad Reid-Selth, appear.

Obviously, hidden messages in media predate the digital age by many, many years. Think of Alfred Hitchcock‘s regular cameos in his own films and New Yorker cartoonist Al Hirschfeld hiding the name of his daughter Nina in everything he drew. A present-day, non-digital example is the appearance of hidden Mickeys throughout Disney’s parks and resorts.

But the occurrence of digital Easter eggs in computer software never stopped. (Probably because programmers are smart people with a fun sense of humor.) Easter eggs like pictures of the staff, even flight simulators, could be found if you were technical enough to code your way into operating systems like Microsoft Office or Unix. The aforementioned flight simulator appears in the 1997 edition of Microsoft Excel, a fact that suddenly makes the most dry and boring computer program a lot more interesting. The 1995 edition had a hidden game that resembled Doom. So, the people responsible for Microsoft Excel are actually frustrated video game designers! That’s adorable!

Of course, in games that were designed to be entertaining, there was always a way to find out “cheat codes” that could let you jump higher, become invincible … you know, cheat at video games. Other Easter eggs are just there for pure fun, like characters doing things that are just plain out of character, or finding games within games, or extra scenes. For those of us who don’t play video games, there are tons of Easter eggs on DVD menus, leading to extra footage from movies and TV shows. Unless it’s a prank, the way Doc Hammer and Jackson Publick led fans of The Venture Bros. to believe that there was an Easter egg on the DVD for Season 2 that contained an entire show, the “secret” first part of the episode “Escape to the House of Mummies: Part 2.” (No, it does not exist.) Real Easter eggs that do exist, however, are currently being discovered on the new extended edition of The Lord of the Rings.

What we can appreciate about Easter eggs is that it 1. allows us to remain on the couch after a movie/TV show is over, and 2. the creators of digital media are a fun-loving bunch.

For a catalog of Easter eggs in all kinds of media, visit The Easter Egg Archive.