Props: How to Apologize on the Internet for a Gender-Related Mishap 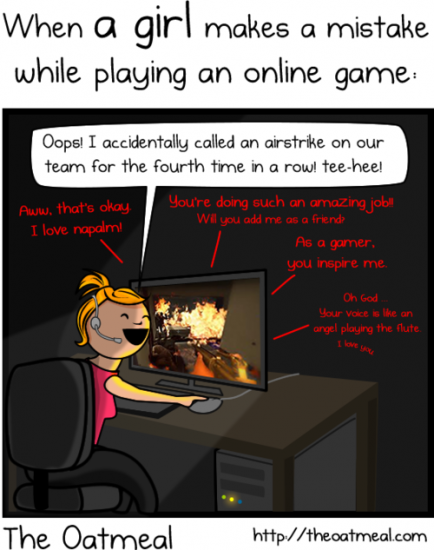 Yesterday, Matthew Inman‘s The Oatmeal was embroiled in the quickest of internet controversies: he published a comic that’s purpose was to illustrate his personal experience that female gamers who are playing badly don’t get called out on it by their male teammates, while when he screws up, he is “eviscerated” with foul language and threats of violence. Naturally, this particular perspective on online gaming culture, particularly in first-person and third-person shooter culture, doesn’t skew with most female gamers’ experience, or, at the very least isn’t the dominant trend in their experiences. And many people told him so. After clarifying his intentions when writing the comic, and the presumably hearing from a lot more people, Inman apologized, admitted the comic was “stupid” and made a significant donation to a worthy, gender-related charity.

So, the story’s over, and it turned out in a pretty satisfying way, so you might be wondering why I’m even talking about it. And it’s because I look at a lot of controversies over harassment in gaming and other aspects of geekdom every day, and not all of them turn out to have even remotely satisfactory resolutions. And let it not be said that I can’t laud a good outcome when it happens, even if most of the others are bad, so lets talk about what went right here.

Inman’s brief comic (NSFW language) went up yesterday, and it’s pretty clear that responses came fast and furious. He updated the comic a little while later clarifying that he didn’t mean to imply that female gamers were bad at games, rather that this trend of responses to bad players of both genders was one he’d noticed in his recent and limited experience playing Left4Dead on Steam.

I was implying two things:

It seems that this response missed the point of complaint for many people, and I’ll make a good guess at what that point is right now. It’s twofold: the hypothetical “lonely dudes” in his comic, the ones complimenting the hypothetical “terrible female gamer” are, indeed, assuming not only that she is bad at the game (rather than that she’s simply making the dumb mistakes that every gamer makes sometimes) simply because she is female and that, because she is female she is emotionally fragile and easily crushed, and deserves to be treated differently from other gamers. It’s all well and fine to say “man, I wish people would compliment me when I screw up” but the fact is that it is unequal treatment based on the idea that one sort of person is more vulnerable and cannot be expected to be as competent as another, and that’s not what female gamers want. It is not unreasonable to believe that women can be as competent as men at video games, because we can.

Here’s the second fold: What Inman’s comic illustrates is a perspective based on his personal experience, which is understandable, but is a perspective which many female gamers (part of the subject of the comic) feel is not indicative or at the very least not totally indicative of their own experience in online gaming. Many women out there have attempted to play in online communities and experienced sexual harassment, unreasonable criticism, insults, threats of violence and threats of rape regardless of whether they’re playing well or poorly at the time.

And, in short, Inman seems to have realized that. Which, considering the state of the average Internet dialogue, is nearly shocking. This is not the point where the original poster, having made a joke based on projecting limited experience across a larger spectrum, usually acknowledges that their experience may have given them a skewed perspective. In fact, it’s usually the point where the OP starts trying to point out why their personal experience trumps or is more valid than the personal experience of the larger group trying to share the different perspective their personal experience has given them. It’s usually the point at which the whole thing breaks down in to personal attacks and becomes a horrible internet mishmash that you have to force yourself to disengage from.

But it wasn’t in this case. Inman instead, put out this apology:

Based on [my experience playing Steam for about a year], and primarily on playing Left4Dead, I noticed that anytime a girl was playing everyone acts REALLY nice to her (even if she throws a molly at the team and sets us all on fire).  That’s where the inspiration for my last comic came from.

Outside of Steam, it sounds like it’s still pretty horrible for women to play games.  Is this true? A lot of people are talking of rape threats, sexism, harassment, and a lot of other awful things.  I’m a guy and I barely talk into my mic, so I’ll concede that my view of things is probably very skewed.

That being said, I apologize to any female gamers who I offended.  I didn’t mean to perpetuate the idea that women are treated more nicely while playing games online.  It sounds like in a lot of cases the opposite is true.

In short:  I’m sorry for making a stupid comic today.

Lastly, apologies on the internet mean about as much as farts do in outer space. So I went ahead and donated $1,000 to the Women Against Abuse foundation.

And there’s where this apology goes from businesslike handshake to a high five. One thousand dollars is a non-trivial amount for a guy who makes a living off of internet .jpgs, even a successful one like Inman, and it’s significantly beyond what I would have expected in an apology for one .jpg that was uploaded to the internet. I’m a believer that there’s no fault in reasonable ignorance, only in continuing to act on it once it’s been pointed out to you. So here’s some props from me to Inman in this instance, for issuing a contrite apology that actually communicates a sense of thoughtfulness and willingness to respect the perspectives of others on the Internet, the place where sincerity often goes to die, and then putting his money where his mouth is.