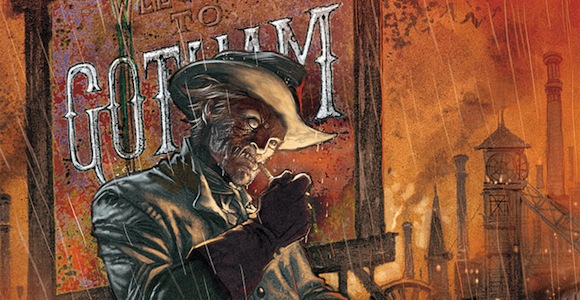 All-Star Western opens with Jonah Hex and Amadeus Arkham teaming up to solve the mystery of a slew of Jack-the-Ripper-like murders in 1880’s era Gotham City. As per usual, Jonah Hex is portrayed perfectly by Gray and Palmiotti. However, Hex seems somewhat out of place in Gotham, regardless of the time period. If he remains the main protagonist, I hope the stories return to the plains. Arkham’s internal commentary provides an interesting perspective on the situation, as well as a deeper examination of Hex’s motivations, but ultimately Arkham’s presence proves as annoying to the reader as he seems to Jonah. The story picks up at the end with revalation of the involvement of what appears to be the Skull and Bone society. If you’re a Jonah Hex fan, I would suggest skipping this opening story arc and waiting for a more traditionally western tale to be released.

Since Brightest Day, Geoff Johns has been hyping up his renovation of Aquaman into a more badass character. Sadly, the first issue of Aquaman is not too impressive. Although Johns does a good job placing Aquaman in a modern setting, he spends most of the issue trying to prove that Aquaman is not a joke, but instead seems to simply perpetuate the joke further. The plot makes little sense, since most of the comic shows random humans making fun of Aquaman to his face, yet at the end of the issue Aquaman decides to abandon his kingdom and start a new life on land with his wife. Although I’m interested to see if the series picks up, I will not be spending any more money to feed my curiousity.

Despite being very nicely drawn, Batman: The Dark Knight is the weakest of the three new Batman titles. The first issue was generally forgettable and uninteresting. The plot shows yet another breakout from Arkham Asylum, with the appearance of a ‘roided out Two-Face at the end, who spouts one of the dumbest lines I’ve heard in comics “You can call me One-Face now.”

Blackhawks gives us a modern interpretation of an old team. All the characters are new and seem somewhat relatable, and there is a great deal of action involved. The new series carries the previous iteration’s tradition of giving the main characters nicknames that appear to be based on ethnic backgrounds, however unlike the original Blackawk characters these names are not so straightforwardly stereotypical, but instead stem from a specific story from the character’s past, making them more three dimensional. The story is somewhat interesting, but doesn’t really grab you. If anything I would wait and look at the first trade before investing any time with this title.

Continuing with the same creative team as pre-Flashpoint, Flash #1 is wonderfully drawn in creative ways, but seems far more like a CSI Central City book than a Flash title. One major change is that Barry is no longer married to Iris West, but is instead dating his co-worker Patty Spivot. Also, it should be noted that there are still no signs of Iris’s favorite nephew Wally. The opening storyline is weak, which may deter new fans who began reading because of Flashpoint. Overall, this is an alright book, but not a very good Flash book.

THE FURY OF FIRESTORM: THE NUCLEAR MEN

The Fury of Firestorm: The Nuclear Men redefines the story of Firestorm by expanding what and who Firestorm is, while incorporating the two different protagonists that fans have grown to love. By including Ronnie Raymond, Professor Stein and Jason Rusch in the origin, The Fury of Firestorm appeals to various generations of Firestorm fans while offering up a completely new story that seems darker and more in depth than stories of the past.

Continuing with the theme of giving each human Green Lantern a re-introduction, Green Lantern: New Guardians provides a simplified retelling of Kyle Raynor’s origin. Following this, the start of a mystery opens up concerning a multitude of mulitcolored lantern rings abandoning their owners and finding their way to Kyle an attempt to recruit him. Much like the other Green Lantern opening titles, this works as a great jumping on point for new fans.

At first glance, I assumed this title was made to appeal to the Twilight crowd, and would offer nothing of interest. I was incredibly surprised to discover that it provided a captivating story set in continuity, with dark undertones and great artwork. The protagonist is remniscent of Blade in his motivations, but has a more complex story, and a strong Frankenstein-like tie to the antagonist. I’m excited to see how this story will play out, and what role it will play in the greater DCU.

This title is basically the new Shadowpact. Not too much happens in this first issue, as an emphasis is placed on introducing all the characters, and putting together a purpose for the team to form. An interesting scene is shown where Superman, Wonder Woman and Cyborg are defeated by a sea of jagged magical teeth conjured up by a powerful crone. Although the first issue was not the most exciting, I feel like this is one title to watch, as it seems like it will become very interesting and hopefully thought provoking as the series progresses.

The Savage Hawkman is nicely drawn, but is not too interesting. Once again Hawkman’s origins are indeterminable and Carter Hall is not a particularly likeable character. It is intriguing to see that the Hawkman costume, made out of Nth Metal, is now apparently symbiotic, but it’s not enough to warrant reading any more of this series. I suggest either waiting for the inevitable re-introduction of Hawkgirl to pick up this title, or just avoiding it altogether.

The story opens with the demolition of the old Daily Planet building, and the unveiling of the new one, which symbolizes a sense of progression forward for Superman and his world. The story is written with an interesting editorial perspective, making the entire comic feel like a story written for the Daily Planet by Clark Kent. There is a great deal of action, but an equally large amount of character development, making a simple story about Superman fighting a fire monster much more compelling. The writing makes the reader sympathize with Clark Kent at the end of the story. Although I still believe Action Comics is the best Superman title of the new 52, Superman is a close second, and a title I would not miss.

Without a doubt the best comic of the week, Teen Titans did a great job of re-introducing the characters of Kid Flash, Red Robin, and Wondergirl. Much of the story reads more like a spy tale than a superhero story, with Tim and Cassie being followed by mysterious men from N.O.W.H.E.R.E. throughout. There are plenty of easter eggs provided as well, with brief glimpses of Beast Boy, Starfire, Bunker, Miss Martian, Static, and a re-designed Raven appearing on Red Robin’s computer. A great moment in the issue is when Cassie first becomes Wondergirl and evokes (clone) Superboy’s first appearance by shouting “Don’t. Call. Me. Wondergirl!” which is ironic because she’s set to meet him in the next issue. I am incredibly excited for this series, especially since it runs hand-in-hand with the equally amazing new Superboy title.

Long story short, the entire comic revolves around a pair of federal agents at a strip club who are checking out the main attraction who performs under the stage name Voodoo. It turns out she’s an alien, but you don’t find out until the last page or two, so most of the story is a lot of unnecessary cheesecake. Basically, buying this comic is like going to a strip club, you waste your money and leave filled with shame and regret. This is a horrible comic that has no future; do not waste your time or dignity on it.