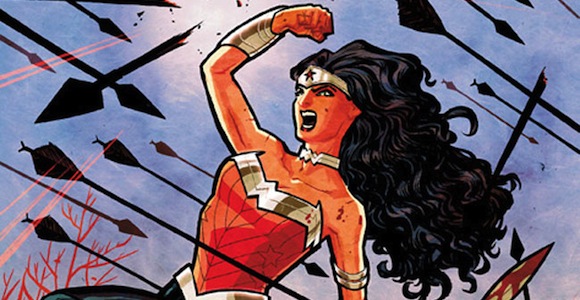 Editor’s Note: If you buy one New 52 comic this week, I hope it’s Wonder Woman #1. I hope it excites many of you when I say: If you like Sandman, or Hellblazer you will finish the issue in what feels like way too soon and be begging for more.

Unlike many of the other new 52 relaunches, there is no retelling of Diana’s origins. She simply IS Wonder Woman, and she is not one to be trifled with. Connections to the Greek gods are still an important aspect of the story, although given the looks of Hermes and Apollo, there may be more to the Greek Pantheon than meets the eye. Like any great Greek tale, the story begins in medias res, and although there is not a lot of focus on Diana, she is presented as a warrior who has been thrust into a new adventure of many. Wonder Woman has been reinvented several times over the last couple years, and I think this is the best interpretation we have seen since DC: The New Frontier.

Where Detective Comics #1 presented the definitive version of Batman, Batman #1 showcases the modern Batman, complete with his extended “family” and the bat computer linked up to special contacts, controlled by voice commands. The artwork is inked well, showcasing the artist’s strong, dark, clean lines. Interesting revisions on classic villians appear, as well as a quick glimpse of a revision on the classic Robin costume. Batman’s monologue at the beginning helps set the scene and the mood, as an intriguing mystery begins to unfold that will leave the reader puzzled and yearning for more. Batman #1 is the perfect book to carry the character, and the franchise, into the future. This is another book I certainly would not miss.

An all around entertaining tale, Birds of Prey does a good job introducing the first two members of the team; Black Canary and Starling, a fun, intriguing new character. Both are revealed to on the lam; Black Canary wanted for a murder she didn’t commit, and Starling on Government watch lists for unrevealed reasons. A small cameo by Barbara Gordon is given, and Katana is alluded to, but neither Huntress nor Poison Ivy make an appearance. The only negative aspect of this comic is Black Canary’s costume. It is clear that it was meant to incorporate parts of her old outfits, but the final amalgamation clashed so horribly and appeared so odd that I was constantly distracted by how strange she looked.

Although Jaime Reyes is a relatively new character, this new series resets his timeline and retells his origins in a relatively similar way, but without the looming threat of Infinite Crisis, or any allusions to previous Blue Beetles, making for a much smoother introduction to the character. The prologue grabs your attention and introduces an aspect of the Blue Beetle scarab that previously wasn’t explained until much later in the series, bringing new readers up to speed, while showing older readers that things will move much quicker this time around. This is a great first issue that effectively sets up Jaime Reyes’ world, as well as that of the Blue Beetle scarab.

In this new series, it appears that DC is trying to change Captain Atom into a cross between Dr. Manhattan and Firestorm. The story finds Captain Atom discovering that he can manipulate the molecular structure of matter, and that using his powers may be killing him. He looks exactly like Dr. Manhattan, but with flaming hair, and an atomic symbol on his chest, instead of on his forehead. Through the issue, Captain Atom looks like he was drawn with colored pencils or painted with a fine brush, whereas the rest of the world is clearly inked, making for very dynamic visuals. Generally interesting, Captain Atom may not be the best of the new 52, but I can certainly see it gaining a fan base.

Focusing on the character of Deadman, the first issue of the story arc adds a great deal of depth to the character, making his origin seem more interesting and the plight of his existence bleaker and more sympathetic. Well written, although very dark and depressing, the issue draws the reader in and . Despite being a thought provoking story, I’m glad that the Deadman arc is limited, as Deadman’s story is not strong enough to maintain a long term series.

Similar to Green Lantern #1, Green Lantern Corps #1 continues from where the series had previously left off, and puts a focus on the everyday lives of the human corp members, namely John Stewart and Guy Gardner. Once again this Green Lantern title does a good job of grounding characters, allowing a good opportunity for new readers to jump aboard. However, the excessive amount of brutal violence seen in the first couple pages are unwarranted, out of character for the title, and borderline sickening; an aspect that will easily drive away potential readers.

It’s great to see Dick Grayson return as Nightwing, especially with the first issue showcasing the character returning to his roots by visiting Haley’s Circus. The current storyline ties in with the mystery occuring in Batman, and paves the way for the one of the first new DCU crossovers. This first issue focuses on the character of Dick Grayson, showing how different he is from Bruce Wayne, and how different the alias of Nightwing is from Batman.

RED HOOD AND THE OUTLAWS

There is so much that’s wrong with this comic that I can’t go into details about it all in one post, so I’ll focus on the positive aspects, and summarize the bad in one word: Starfire. Red Hood and the Outlaws is what you would get if Michael Bay made comics. That is to say, it has lots of insane, crazy action, bad puns and it’s great visually. Although there isn’t a great amount of character development, the comic presents Jason and Roy as unique characters who, for better or worse, have stepped out of the shadows of their mentors. If you want a mindlessly fun comic with a lot of shit blowing up, and you are able to look past the atrocities concerning Starfire, then you will enjoy Red Hood and the Outlaws.

Taken from Supergirl’s point of view, this first issue shows Kara’s crash landing on earth, and her first encounter with both humans, and her cousin Superman. Through her internal monologue, we learn a great deal about Kara’s history, personality, and home world; as well as her first perceptions of Earth. Filled with action and great characterization, Supergirl is off to a good start,….now if only the poor girl can find some appropriate attire for her nether regions.