The Magicians’ “Poached Eggs” Did Not Disappoint 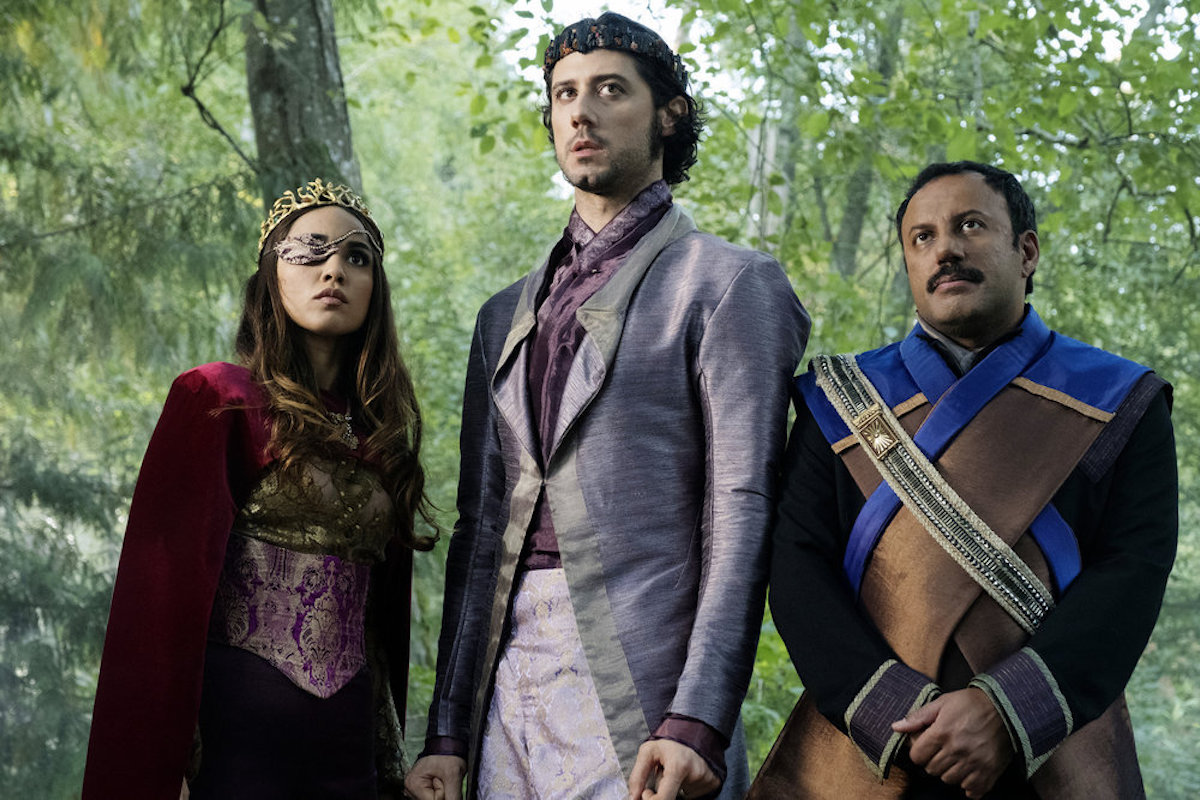 [Editor’s note: Hi there! Welcome to our first recap/review for Syfy’s The Magicians! This one covers last week’s episode, and we’ll be back soon for this week’s episode and a series overview so far. Enjoy!]

The Magicians‘ “Poached Eggs,” episode 7 of season 3, doesn’t disappoint. In fact, I’m hard-pressed to think of a way to improve it. Maybe someone could fix the broken TADA sign at The Physical Kids dorm/party house at Brakebills? No, that’s just an awesome detail/metaphor about the loss of magic this season. (Shoutout to the set design people!) Wait, I have something! If you have the mad skillz of Elliot and Margo, maybe you’d think of a better place to hide your extortion materials? No, that’s believable given the stress they’re under in their arranged royal marriages not to mention everything else …

Anyway, you don’t have to be a hardcore contemporary fantasy nerd or a nitpicker around worldbuilding to watch and enjoy Syfy’s The Magicians, but it doesn’t hurt. You could just like ensemble casts and deep character development with tragedy and comedy and magic. Now in its third season and going strong, you know The Magicians is binge-worthy and won’t leave you hanging—or it will, but in the right ways.

Last week’s episode, “Poached Eggs,” is really the perfect example of this. It leaves you with cliffhangers you care about. Will Margo and Elliot live through the latest kingdom complication? Probably, I’m guessing, but the cliffhanger isn’t so much whether they will live but how? The show’s creators didn’t disappoint this season with “fixing” a loose end from the book series: Wouldn’t the people of Fillory be pissed off if some Ivy League kids from Earth showed up and took over? Wouldn’t it be crazy hard to run a whole world?

The third season continues with the politics and pitfalls of Fillory. “Poached Eggs” could have been a well-deserved break from politics for the audience, but Elliot and Margo do not get a day off, so neither do we. The writers know how to mix the drama of betrayal and sudden-teen daughters complaining about Cats (the musical) with the horror of war.

Thankfully, the politics of Fillory are never Star Wars Episode II boring. They’re more Aaron Sorkin exciting, but with nasty fairies instead of Republicans. Part of the reason for this is Summer Bashil’s subtle performance as Margo Hanson—not that Margo herself knows any subtlety. She’s just a bad bitch High Queen with a huge hidden heart and sacrificed eye. While Margo can rule on her own, half of that hidden heart belongs to Elliot Waugh (Hale Appleman), who’s also a bad bitch. Unlike Margo, Elliot may have the male privilege of being High King, but this also comes with the heartbreaking responsibility of an insta-family a lesser man could resent, but not our High King.

Meanwhile, Margo has every reason to resent her far bloodier and potentially more assaultive forced marriage. But, with Elliot’s help, they’re about to find a way around all that. Or are they? Margo and Elliot’s friendship and love for each other, as basically a far more badass Will and Grace, continues, hopefully, to survive anything and everything. This is real non-romantic love and friendship for the reluctant grown-ups of magic.

“Poached Eggs” doesn’t disappoint with girl bonding either, with Alice (Olivia Taylor Dudley) and Julia’s (Stella Maeve) trials of transferring power. It’s might not be friendship—their PTSD makes that impossible, for now—but it’s bonding all the same. That’s why it’s even more meaningful when Alice decides to do the right thing. She also tells Julia something she really needs to hear when it comes to getting power from trauma.

Shoutout to Dean Fogg (Rick Worthy) for continuing to be my favorite academic nihilist. I would really watch a YouTube channel that’s entirely him just talking and drinking.

So, it’s happened as it did in the books. Quentin “Q” (Jason Ralph) has met up with plucky upbeat Poppy Cline (Felicia Day). In the book series, she was the Australian dragon-studying graduate student who helped our poor Q out of his depression. No, judgment, Q. If I found out magic was real but I had to go back to grad school to get it, I’d need nothing short of a dragon-loving Felicia Day to cheer me up, too.

While Felicia Day isn’t doing an Australian accent (I think her Poppy is from New Jersey), Poppy is now a fully three-dimensional character. Her new dimensions of being a chaotic-neutral perky possible-pyromaniac are nailed by Day. Of course, she still loves dragons, and this helps with the main plot of saving magic. What’s great is that while she’s more complicated, so is her relationship with Q.

Will she still get with Quentin and help him out of his tendency to withdraw? You’ll have to watch Poached Eggs to see.

There’s no shortage of couple relationship drama for Kady/Penny (Jade Taylor/ Arjun Gupta) here, either—not that they have time for it when Q and Poppy help Penny break Kady out of that shady hospital.

As Poppy and Q would probably know, a psychiatric hospital actually can’t hold someone involuntarily in a mental ward unless they make a direct and serious death threat to a specific person. Kady saying: “I swear I’ll kill you” to an invisible Penny would not count, but I don’t see this as a writing mistake. Sometimes psychiatric hospitals are shady AF.

Kady lovingly accuses Penny of being self-destructive and codependent. She also admits she can’t live without him. Kady knows she struggles with addiction, and a self-destructive codependent is exactly who she shouldn’t be with. But that’s what makes it so hot! Well, aside from the ultimate hope that maybe they could become inter-dependent and be equally responsibly for themselves and each other, but there’s no time for any of that. They have to split and do their part for the quest.

Kady now owes favors to Harriet (Marlee Matlin), which will involve a library heist with Q and Poppy. Penny’s part is a bit more complicated. It too involves books, but it seems like there will be more dragon eating. It’s always great to see Harriet. I’m more than psyched to see that next week’s ep is titled “Six Short Stories of Magic,” and one of the stories seems to feature her! So, get your American Sign Language (ASL) books out, or just your glasses to read ASL subtitles. I don’t know exactly what Harriet wants with The Library. I do believe that libraries should be about free information, and The Library surely isn’t. I also someday hope to learn how Kady came to know Harriet and learn ASL.

The other stories of “Six Short Stories of Magic” seem to some other secondary character favorites: Elliot’s wife and grieving mother Fen is in the mix, played by Brittney Curran, who seems to have endless range. Poppy Cline (Felicia Day), as previously mentioned, will be featured. Will there be dragons? A mental hospital? A fire started? Will a dragon start a fire in a metal hospital? Probably not, but I can dream.

The rest of the stories feature some of our beloved regulars Eliott, Q, Alice, and Penny. That seems like a lot, if it were another show, but I’m sure The Magicians will weave all the stories together in a perfect balance of individual character growth and main quest/plot. It’s the great magic trick the show is managing to pull off better than ever in this season.

To quote a non-corporeal Penny as his almost-girlfriend Kady punched an orderly in the face: “Go team!”