A heart full of mad love. 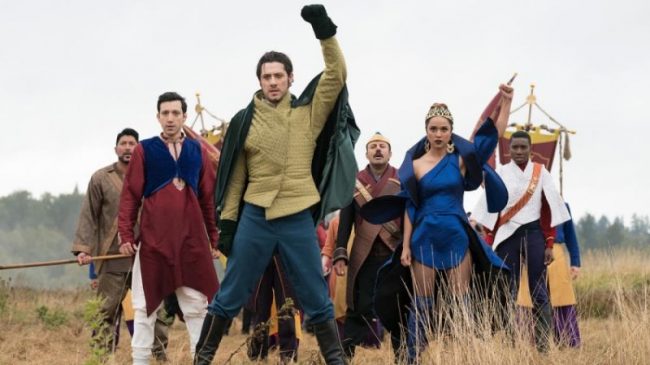 This seems to be the week for musical numbers on genre television (more of this trend, please). On The Magicians, Margo cast a spell on Eliot to bolster his confidence—and the result was a rousing number from my favorite musical as Eliot and company sang “One Day More.” Mes amis, I did not live until today.

[Watch the scene here. Then come back and talk to me about it.]

If you’re new to The Magicians‘ magical land of Fillory or haven’t yet watched the episode, “Lesser Evils,” here’s the set-up courtesy of Indiewire:

In the episode, Fillory’s High King Eliot (Hale Appleman) is about to enter into mortal combat with the King of Lauria, who has never been defeated. Eliot’s right-hand magician and partner in every crime imaginable Margo (Summer Bishil) gives him a pep talk and reminisces about how well he did in a production of “Les Miserables.” Inspired by that success, she used magic to force him and others to perform the number “One Day More” from the musical in order to get him pumped up for his duel.

Or as Syfy’s official recap put it more succinctly, “Margo does some musical magic and gets pretty much the entire castle to do a really, kind of amazing Les Misérables sing along.”

Kind of amazing, Syfy? Kind of? “One Day More” is epic and perfect . Hale Appleman, who has a background in theater, does a great job as a musically-charged Eliot. His tenor is lovely and I could be convinced to follow him into battle .

Apparently, all of the actors worked hard to do their own vocals, and they pull off some difficult parts. Co-showrunner John McNamara told ScreenerTV that they cut the Javert verses from the song because “it just doesn’t apply [to the situation] even though I think it’s wonderful.” I love how they handle the missing verses in the clip.

If every television show on Earth wanted to break out in song about 19th-century rebellions, that would be just fine with me. What do you think of The Magicians‘ spin on Les Mis? And if you want to talk about The Magicians or Les Misérables in the comments, my place is here, I fight with you.

[Watch it again, just because]

(via Indiewire, image via Syfy)