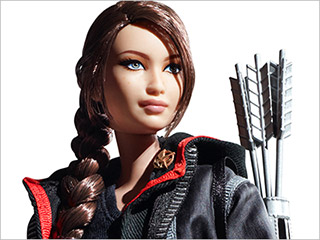 We admit it! We greeted the announcement of a Hunger Games Barbie with a little skepticism. Okay, a lot of skepticism. The secondary marketing for the movie (which took first place at the box office for the third weekend in a row this weekend, beating Titanic‘s 3D rerelease and yet another American Pie movie, grossing more than $450 million globally so far) has ridden a surprisingly satirical line by speaking to its audience as if they were citizens of the hedonistic, voyeuristic Capitol; casting those who would excitedly anticipate The Hunger Games as those who would excitedly anticipate the Hunger Games.

A Katniss Barbie, however, seemed outside of that particular merchandizing plan. We feared the transformation of Katniss Everdeen into a Barbie doll in much the same way that Katniss is transformed into a dressed up Capitol plaything, but it appears what we’ve actually gotten looks more like an action figure than anything else. 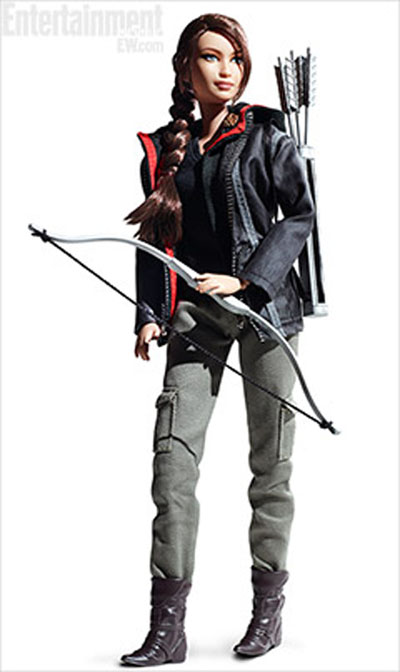 I chose to dress her in the outfit she wears during the games, since this is where all the non-stop action takes place and is instantly recognizable by fans. Of course, she wears her mockingjay pin proudly on her lapel… The doll’s minimalistic style and details — such as her loosely braided hair and makeup-free look — also really embody the heroic character Katniss… I am a huge Hunger Games fan and loved all three books, so it was truly an amazing experience for me to be able to design the Katniss Barbie doll. I think it really pays tribute to Katniss and The Hunger Games.

Oh, and in other news, Gary Ross might not be quite as out of the running for Catching Fire as it would appear.