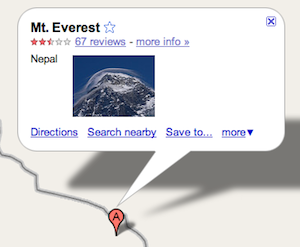 The internet decided to start giving Mt. Everest poor reviews on Google Maps in the name of comedy. In related news: The internet is a weird place.

Like the Three Wolf Moon Amazon reviews before it, the internet decided to take Mt. Everest down a peg and flood its Google Maps user reviews page with fairly humorous poor-to-mediocre reviews. Below are some examples of why Mt. Everest isn’t the place for you.

“I don’t know how much of a mountain this is. I was on Splash Mountain and Space Mountain at Disney World last week and both were a lot more fun and allowed me to use fast pass to get to the top quicker.‎”

“…First off, the accomodations left something to be desired. It was bitterly cold and there was no insulation. I had to use a sleeping bag just to stay warm. Secondly, the night life is terrible. I couldn’t find find a decent bar and there weren’t many women around. Finally, with a mountain as impressive as Everest, you would think there would be better skiing. There is not a single chairlift and no terrain for beginners.‎”

“The view is one of the best i’ve seen but I was unable to update my facebook with a photo because there was no wifi or cell service for that matter. This may not seem like a big deal but it kind of defetes the purpose of climbing Mt. Everest if you can’t update your facebook status once you get there. Hopefully management will add a hotspot soon.”

“My mate said he climbed it with runners but I would suggest hiking boots as the Khumbu icefall can get slippery at times…you don’t want to roll an ankle. You should also buy enough smokes and red bull for the return trip as there are no shops along the way.‎”

“I arrived here only to find out that the elevator was broken. The desk clerk assured me that it would be fixed, “very soon”. It wasn’t. :( Between that and the large hairy naked man running around making a godawful noise at all hours, this trip was the worst. Next year I’m going to Kilamanjaro, I heard that their spa is to die for.‎”

“There are absolutely no bathrooms anywhere. Peeing off of mt. everest would be fun, except it’s so damn cold, that your pee will freeze and your dick will get frost bite. Not recommended.‎”

Check out the rest at the Google Maps user reviews page.