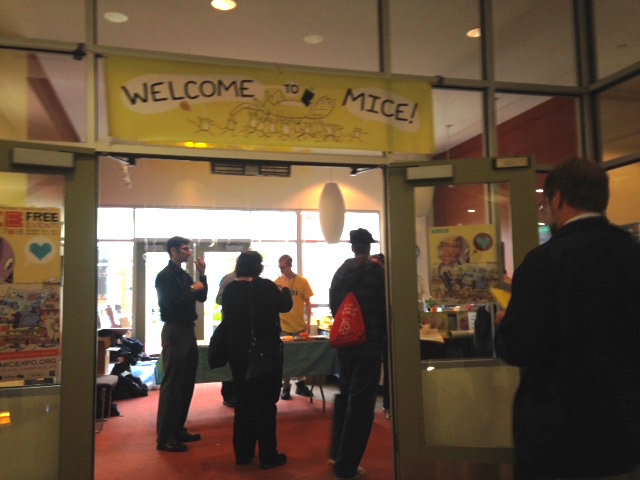 October 17th and 18th, 2015 marks the 6th year of the annual Massachusetts Independent Comics Expo, a comic/graphic novel/cartoon event featuring local and aspiring illustrators and artists from Massachusetts and beyond. As a community event, MICE aims to introduce readers of all ages to various styles, genres, and the history behind their favorite comics while introducing them to the fundamentals of visual storytelling. It’s also a chance for aspiring artists (especially those who create webcomics) to promote their work to new audiences and meet professionals within their field.

Interacting through panels and workshops, both artists and casual spectators collectively learn and engage in the world of independent (and commercial) comics of today. More than 3,100 people attended the event this year, which is a 1,000 more than last year, according to MICE’s Facebook page! Not only is the two day event free to the public, but each year features even more exhibitors and guest speakers, who bring unique and innovative content to a wide audience of readers. 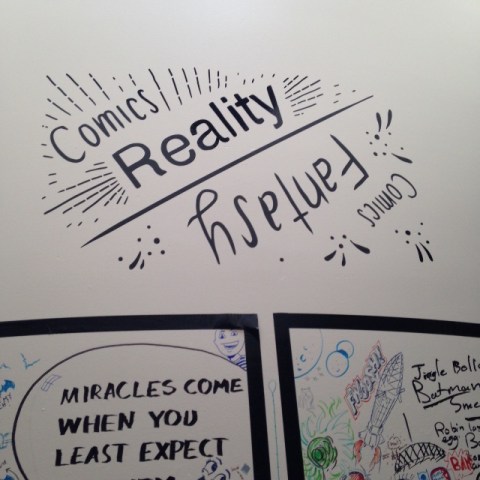 I have a special (and insider) connection to MICE. I worked with MICE last year as a gallery assistant at their housing location, Lesley University. Before the expo, 40 or so artists submit work to the Lesley University Atrium Gallery (located on 1815 Massachusetts Avenue Cambridge, MA 2nd floor). An opening reception was held October 8th, titled Comics Reality/Comics Fantasy. This exhibition is particular featured an interactive make your own comic wall were people can draw on four large panels. People were still drawing on the wall during the expo as well. The university has been a long sponsor and space for the event. They collaborate with The Boston Comic Arts Foundation, the organization in charge of presenting the expo. I assisted in putting together their 2014 gallery exhibition, which featured 30-40 artists in the state showcasing manuscripts, rough drafts, and finished copies of pages of what they are working on. This year, more than 40+ artists are currently being showcased in Lesley University’s Atrium Gallery while these past two days bring all those artists and more together to represent the craft that is continuously progressing in the public and scholarly eye.

What fascinates me most about MICE and its community is how accessible it is. Rarely do comic conventions focus primarily on the cartoonists and writers themselves to board general audience. MICE caters to the independent and local artists and comic enthusiast population of Massachusetts who love promoting original work while sharing secrets and techniques about the field. People who write about comics are also able to attend to help the aspiring (and often struggling) cartoonists and webcomic creators put their work on the market. A big theme this year was on webcomics and the growing force they impact online and off.

The event is family friendly, focusing more on the comics themselves and the artists who make them. Panels feature an ASL interpreter to translate the event for the deaf population of Massachusetts. This event is also highly accessible to aspiring comic writers and artists. Children run around seeing their favorite series come to life. For about three quarters of the exhibitors, this was their 1st year at MICE and for most of them, their first time selling their comics.

For Myken, comic artist and illustrator, this is her 1st year at MICE and her 1st year going to comic and anime conventions regularly for business. Myken loves the scene of MICE and the people who put it together. Myken was not only selling her original work but was also selling an original English Yugioh 5D’s doujinshi (self-published comic of an existing series). In her words, she “deals in the Yugioh” (pun totally intended).

I also talked to Col Williams, an illustrator and activist. This is their first year at MICE as well and is also a current undergraduate student at Lesley University in Illustration. They focuses on personal narrative, combining poetry and prose with illustrations to talk about issues in diversity and activism. Col references Lumberjanes as one of their influences as an illustrator. 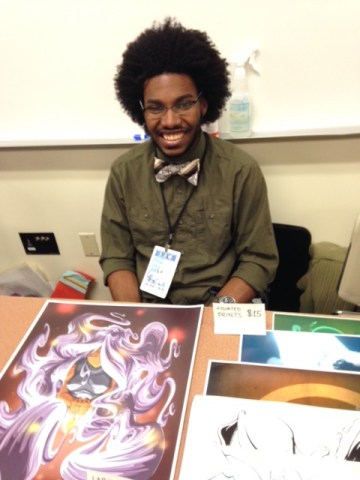 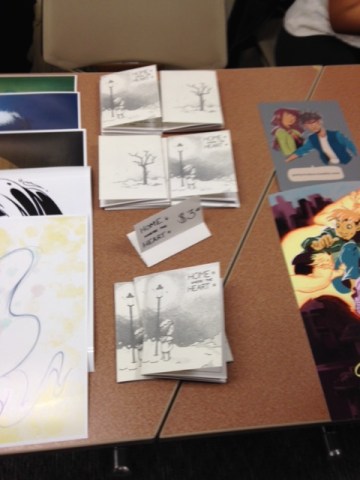 Michael Talbot was another illustrator/designer from Lesley experiencing his first MICE event. He has always loved drawing and reading graphic novels and focuses on autobiography. For his original comic, it took him almost 2 months to make and publish. 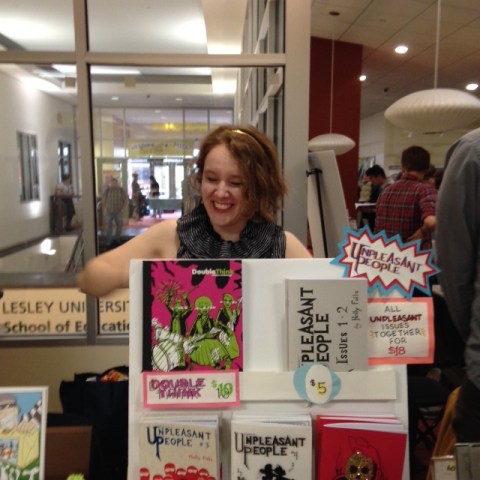 I also spoke to veteran MICE support Holly Foltz, whose current ongoing series Unpleasant People was one of my personal favorite comics at last year’s MICE event (you can find the first 5 issues on her website’s shop). 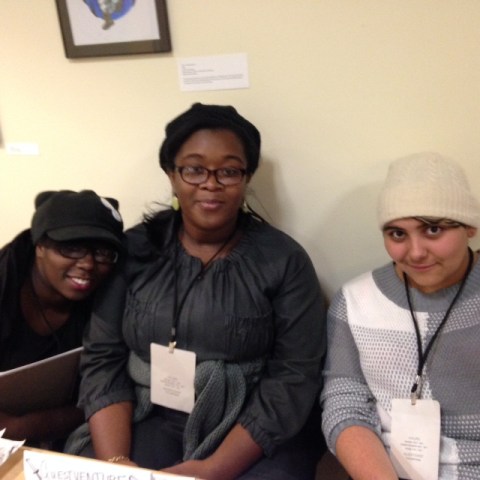 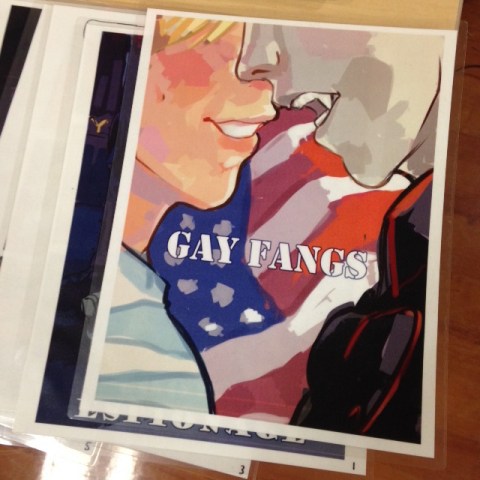 One of the biggest draws to this year’s MICE was the inclusion of the students and recent graduates from the Boston Arts Academy. Student in the school were able to submit work for MICE for review and some were selected to be part of the gallery exhibition. Two of them were Mira Mija and Fuoco-Go. This two-girl comic group were thrilled when their teacher from Boston Arts Academy recommended them to join the event and was exhibiting her new work Gay Fangs, a webcomic about the son of Dracula and Carmilla who falls in love with a human boy. They were interested on how gay men were portrayed in comics and also drew influence from her love of Steven Universe and various other series. While their works are mainly in webcomic form, Mira Mija and Fouco-Go are expecting an anthology series of her original works to be published soon.

The event had veterans of MICE and professionals from Comics Alliance and Publishers Weekly including Juliet Kahn, Janelle Asselin, Brigid Alverson, and many more. Panels included tips for writing about comics, an Iron Chef inspired cartoonist tournament, Black Independent Comics and Cartoonists, and a spotlight session on two of the main guests, Lucy Kniskey (Relish: My Life in the Kitchen), Ryan North (The Unbeatable Squirrel Girl) and Gene Luen Yang (Boxers and Saints, Avatar: The Last Airbender). I went to the panel Writing About Comics, were writers talked about reviewing comics, comics and journalism, and criticism in the field (both independent and mainstream). Workshops on storyboarding, lettering, and much more were also featured at the event. 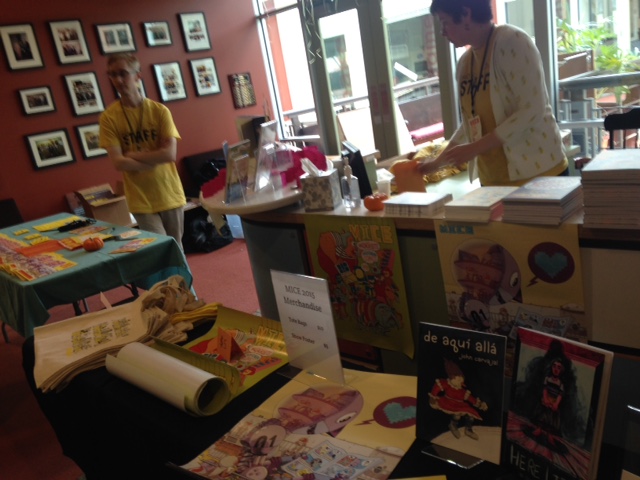 If you live in or near Boston, MICE should certainly be on your radar if you wish to support local comics, webcomics, and cartoonists reach newer and diverse audiences! Keep your eyes open and see you for MICE 2016!

Jordan Kass Lome is an art educator and researcher in Boston who helps develop creative marketing strategies for artists. She also loves to combine her fandom interests with her scholarship. She is currently finishing up a Masters of Education in Community Arts Education and probably expects to live the rest of her life as a village witch with lots of cats. Follow her work at godotforbroke.wordpress.com.