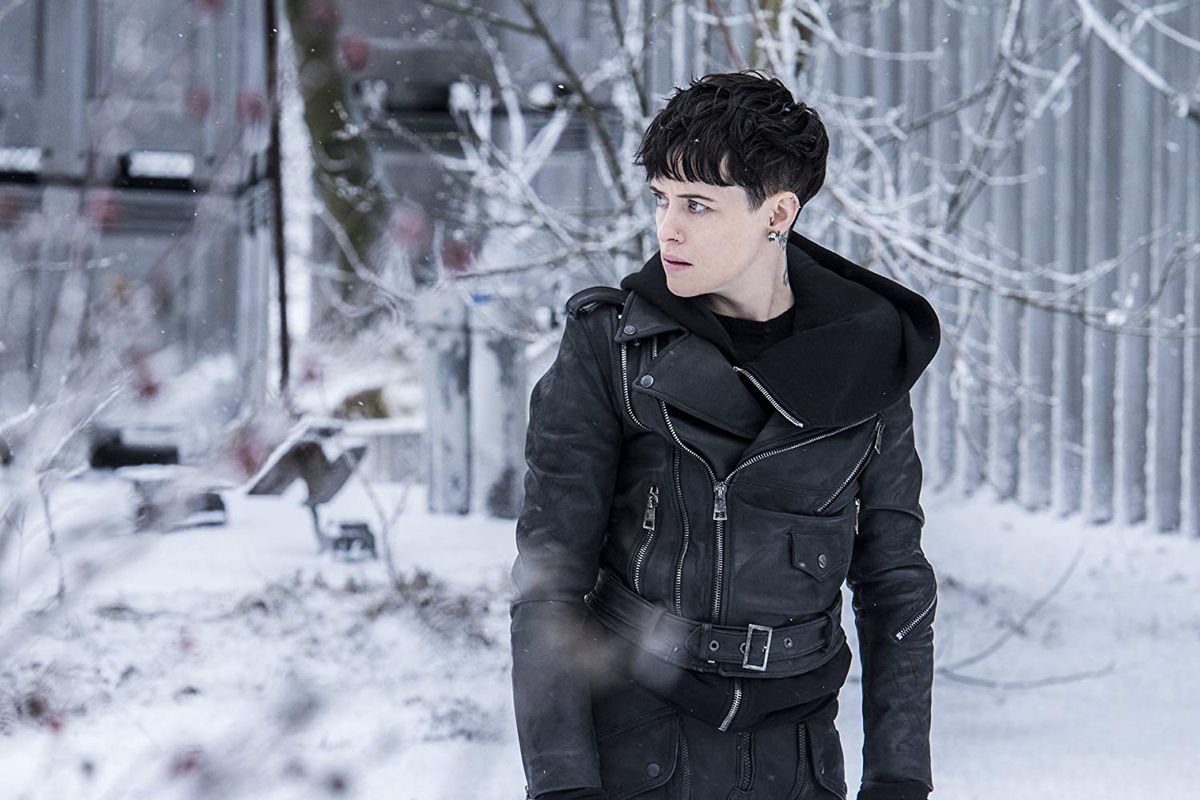 2018 feels primed for a reboot of Stieg Larsson’s goth cyberpunk queer anti-heroine Lisbeth Salander. In the wake of the #MeToo movement and the Kavanaugh hearings, there is no better time for Sweden’s avenging angel to do what she does best: hurt men who hurt women. And the opening scene of this new adaptation by Fede Alvarez (Don’t Breathe) delivers on that promise.

Lisbeth, played by The Crown‘s Claire Foy, breaks into the luxury apartment of an abusive millionaire, where she strings him up by his ankles, depletes his bank accounts, and rescues his battered wife and child. It’s a stylish and smart opening, with Foy in white make-up and a hood that has her feeling like a superhero vigilante.

And that’s what this movie should have been. When Larsson’s Millennium trilogy came out, Salander quickly became the breakout character and focus of the series. The brilliant hacker with the violent backstory and unapologetic queerness captured audience’s imaginations as a new kind of flawed yet meticulous hero. Salander first appeared on the big screen in Niels Arden Oplev’s The Girl With the Dragon Tattoo, played by Noomi Rapace in an intense, live wire performance. In 2011, David Fincher’s American adaptation saw Rooney Mara as an open nerve clad in black leather, a performance which earned her an Oscar nomination.

Fincher’s big budget adaptation of Larrson’s series was meant to be a trilogy, but a poor box office performance scrapped plans for any follow-up films. Now, seven years later, Sony is trying to reboot the Dragon Tattooniverse based on a follow-up novel written by David Lagercrantz, who took over the book series after Larsson’s death in 2004.

If you’re new to the adventures of Lisbeth Salander and her sometimes partner, journalist Mikael Blomkvist (Sverrir Gudnason), then you’re out of luck. The film takes no time explaining their relationship or their shared backstory, and assumes that its audience has either read the trilogy, seen all the films, or both. Spider’s Web feels less like a reboot than a second or third film in a franchise, coasting on audience’s recollections instead of crafting a coherent original story.

And let’s talk about that story for a moment. Salandar is hired by former NSA programmer Frans Balder (Stephen Merchant) to steal a program called Firefall, which allows the user access to the nuclear launch codes of all missile defense systems in the world. Salandar must protect Balder and his young son as Russian terrorist thugs try to steal the program, while at the same time fending off an NSA agent (Lakeith Stanfield) tasked with retrieving the program for the U.S. government. This plot feels more at home in a James Bond film (or even a Fast and Furious installment) and its formulaic spy movie narrative feels shoehorned into the story.

With this film, Sony and Alvarez have blunted the edge and originality of a character like Salander. Salander shines when she’s violently attacking misogyny and doling out her unique brand of justice, so it’s a bizarre and disappointing choice to jam her into the framework of a spy thriller. The movie tries to touch on her traumatic backstory and a long lost family member out for revenge, but the thin characters fall flat and not even Foy’s prodigious talents can make this version of Salander compelling or memorable.

Lisbeth Salander deserves better than this half-baked film, and if you want to revisit the character you’d be better off re-watching Noomi Rapace’s stellar performance in the Swedish trilogy.