The Geek Guide to Dating A Geek 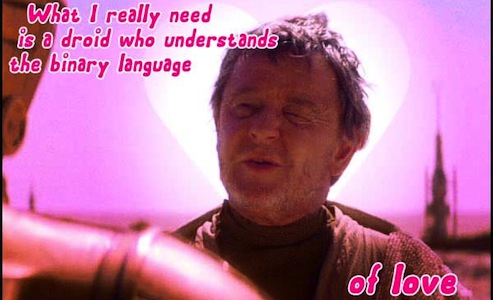 Resident style contributor Elizabeth Giorgi takes some time out from DIYing Wonder Woman shoes to share some general advice and personal experience that’s just as relevant to anybody who isn’t dating a geek or isn’t a geek themselves.

I’ve been a self-identified nerd since I was 16, but I didn’t always date within my identity. I dated all kinds. Hipsters. Musicians. Wannabe hipsters. Bad musicians. My current boyfriend is a total nerd too, but I almost gave up on our relationship after our first date because he hadn’t read George Orwell’s 1984. (And he over-used exclamation points in his emails.)

1. Don’t judge a geek by their fandom. If you’re a Trekkie, but you discover that the nerd you’re dating hasn’t even seen a clip of Star Trek on YouTube, don’t immediately guffaw. It will be your first reaction, because you can’t imagine your life without it. Instead, look at this as an opportunity to show a side of yourself to this person and share it with them.

2. If they don’t get it, don’t freak out. My boyfriend doesn’t really get my obsession with Game of Thrones. He’s just not into it and I don’t need him to be. As a result, it’s something that we just don’t do together. In the end, I appreciate that we have our own interests. Yes, it’s fun to dress up in coordinating outfits at Cons together, but there’s also a lot more to life than cosplay. Unless you’re cosplaying every week, I wouldn’t base a relationship on it.

3. Share your passion. There’s this tendency among geeks to try and one up each other with knowledge. This comes out in trivia contests, coffee shop conversations and comment sections. It can be really easy to start bickering over the validity of a modern day Sherlock Holmes, but don’t use your shared passions to compete with one another. Instead, use it to grow closer, share experiences and discover new things.

4. Invest in yourself. Geeks love to invest in their collections. Comic books, LEGO sets and action figures all require a commitment of both financial resources and time. As a result, many geeks don’t spend a lot of time or money improving themselves. Go buy a nice pair of jeans and a top that isn’t from Threadless and walk confidently. Then, get a haircut that brings out your best features. If you feel good about the way you look, you’ll feel more confident whenever that first date happens and as you go about your day. (Before you go nuts in the comments section about how outward appearances shouldn’t be important, remind yourself that you wouldn’t show up for a job interview or a Con dressed inappropriately. A date should be no different.)

5. Be open-minded. This goes hand in hand with rule number 1, but I wanted to bring it up again for another reason. In matters of compatibility, we can get very focused on finding someone with shared interests instead of someone with a compatible personality. As a result, we often overlook the people who make us laugh, simply because they don’t love The Hobbit as much as you. I’d choose laughter over canon every time.

Elizabeth Giorgi is a writer and filmmaker from Minneapolis. She blogs about mixing life as a nerd with her career at beinggeekchic.com. In 2010, she was nominated for a Webby and won an Emmy for Science of Watchmen. Follow her on Twitter: @lizgiorgi

Pic via Something Awful.