Call Her Cynthia: The Flash Still has a G*psy Problem 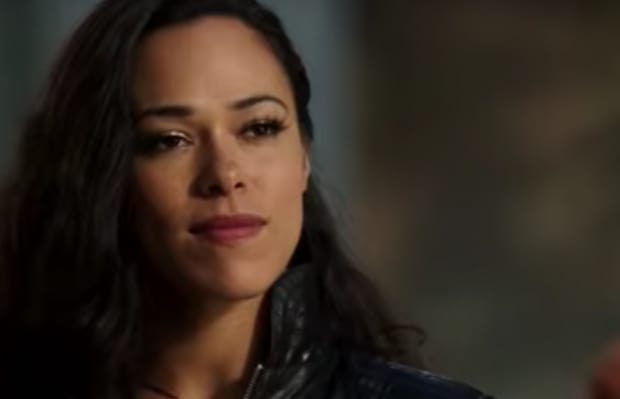 In just five episodes, the fourth season of CW’s The Flash has already given fans a lot to celebrate. From its mercifully lighter tone to a bolstered, more involved Iris West, showrunner Todd Helbing and company seem committed to returning the show to its comic book-y roots, wooing its audience with some of the alluring elements reminiscent of the first season. One of the best developments thus far has been the budding relationship between Cisco Ramon, or Vibe, and Cynthia Reynolds, Earth-19’s fiercest dimension-hopping collector. Carlos Valdes and the astounding Jessica Camacho have a tangible chemistry that’s as addicting and as it is fun to watch. Also, it’s just great to see Cisco finally get some well-deserved love.

While Cynthia’s arrival has been a largely welcome one, many fans have struggled with the show’s decision to maintain her original comic book name, G*psy. Introduced in 1984, Cynthia was innocuously labeled an “adventurer” while presenting as the well-worn, costume-y image many of us have associated with the trope since childhood. Barefoot and with her headscarf, swishy skirt, preponderance of gold jewelry, and clever grin, many were distracted from the fact that the term “g*psy” stands as a racial slur originally assigned to the Romani people by Europeans. Though the word is often misconstrued as a cutesy identity for the free-willed wander, it comes with a well-documented history of discrimination, oppression, and violence that the Romani still experience today.

While that knowledge may have been played down (or conveniently ignored) in the ’80s, it now serves as the primary reason marginalized fans continue to implore the show’s writers to reconsider the harmful moniker. Much to our disappointment, the decision was made to proceed with the introduction of the outstanding character with a wildly offensive name.

Since her inception, Cynthia has proven to be an excellent addition to Central City’s tapestry of characters. Her deepening bond with Cisco, as shown in season four’s episode “Elongated Journey Into the Night,” doesn’t show signs of fading away anytime soon. So it was a relief to watch Cisco say those three precious, long-awaited words we’ve all been waiting to hear: “What’s your name?” The absurdly fair question (they’ve been dating for six months, mind you) was met with inexplicable reluctance, followed by an insistence to be referred to as the G-word. Considering that Cynthia admitted to loving Cisco just two episodes prior, as well as their recognition of their interdimensional bond, her resistance towards revealing her name to him makes little sense. Unless she’s hiding something major by concealing this information, her reaction just appears to be weirdly stubborn. But before we have a moment to interrogate this any further, her father, Breacher (legend Danny Trejo), appears quite suddenly to make things hilariously difficult for roughly 24 hours.

Hijinks, intrigue, and general superhero happenings ensue until the last few minutes, when Cynthia and Breacher prepare to depart. As Breacher informs her of an incoming emergency on their Earth, he manages to reveal her name for Cisco to hear (as well as his own: Josh). Cynthia, evidently embarrassed, makes it clear that she will not adhere to her given name, lest he wants to “see what happens” should he continue to refer to her as such.

And that determination to hold onto the glaringly problematic identity is where the major issue of all this lies.

While the acknowledgment of her civilian identity is a majorly positive step in humanizing the character—an overdue necessity after multiple appearances—the effort is almost entirely nullified by cementing her steadfast preference for her alias. She notes that she likes the name because “it is mysterious, and it’s moody,” but are these really good enough reasons to continue to alienate entire sections of a rather vocal fandom? By deciding to continue the promotion of a literal slur under the guise of her agency, it sends a clear message that history, no matter how damaging, takes a backseat to canon.

Shows like The Flash—ones that derive from miles and miles of source material – divert from canonical story and character points all the time in favor fresher, more beneficial angles. That’s the obvious beauty of fiction and adaptation: there’s room to do whatever you want. Theoretically, changing her name (or simply deciding to only refer to her as some variation of Cynthia Reynolds) would not have been a major challenge to an imagination that has accepted anything within the Arrowverse thus far. In fact, it would have been an easy, yet phenomenal show of compassion. Instead, the choice rings of other instances when racism was ignored for the sake of “remaining true to the comics.”

To watch this show cling to something so overtly prejudiced is disappointing, even if Cynthia doesn’t necessarily portray the stereotypes typically attached to her unfortunate alias. It’s always dismaying to watch something you enjoy shirk the opportunity to do better, especially when the solution is so accessible. My hope is that the team behind The Flash realize that it’s never too late to course-correct, and that acknowledging her as Cynthia does nothing to negate her powerful presence.