The Evolution of Evie Frye in Assassin’s Creed Syndicate 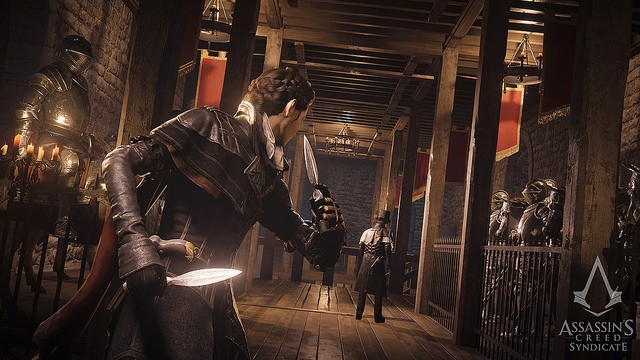 We talked to Melissa MacCoubrey (@Melqartiii), one of the writers of Assassin’s Creed Syndicate, to get a better idea of the process Ubisoft went through in developing the much lauded character of Evie Frye, Master Assassin.

Emma Fissenden (TMS): Was Evie Frye developed concurrently with her brother Jacob or did her character, or at least the beginnings of her character, emerge after his? Was she a surprise discovery?

Melissa MacCoubrey: Both Evie and Jacob were under development throughout the process. From the very beginning, we knew we wanted to have both of these characters in the game but it was their relationship that we were figuring out. Not long after, we knew that they would be perfect as twin Master Assassins.

TMS: Evie is academically minded, serious about her studies and fiercely dedicated to both her father’s work and the Assassin Order. While the final version of Evie is also wonderfully passionate and expressive (though she might roll her eyes if she heard me say that), were there any struggles you guys had when bringing her to life considering this seriousness?

MacCoubrey: No, actually, finding Evie’s voice was quite a simple process. I think the challenge was more about finding how the pieces of the story fit together more than how Evie and Jacob would contribute. Once we nailed the relationship between the two siblings, we knew what her reactions would be and what her motivations were so her decisions throughout the story were easy to make. And then, of course, we were so fortunate to have Victoria Atkin’s touch, and all those wonderful expressions and giggle-inducing eye rolls that brought an extra dimension to Evie. It’s the combined effort that really brings a character to life. 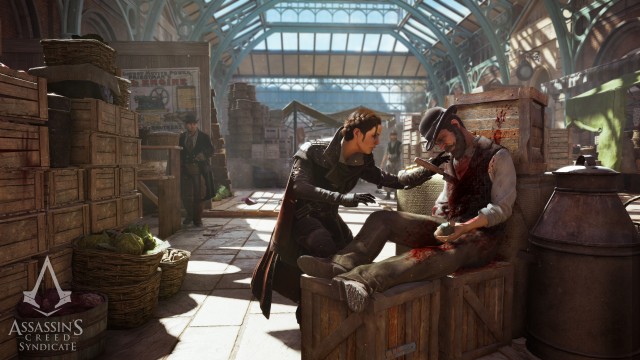 TMS: And conversely, was there a concerted effort to avoid the pitfalls some other female characters in video games find themselves in when they appear to be intellectually superior to the other characters around them and are portrayed as emotionally inaccessible?

MacCoubrey: This team was really dedicated to making Evie an accessible character but also a character that could stand on her own two feet, and we worked really hard as a unit to help the team question their habits when approaching her design. I think there’s something too in the fact that the relationship we chose to pursue was a brother/sister duo. We designed the twins to coexist as a functioning unit, and a sibling relationship is an accessible feeling for a lot of people. I think this relationship did favours for both characters, it made them both people who were emotionally accessible. I think that Evie’s dedication to intellect was a good balance to Jacob’s constant jokes, even to the point of relief, and vice-versa.

TMS: Evie Frye is both a ruthless fighter and an expert at stealth. Can you talk about how her fighting style was developed? Were there any aspects of her stealth skills or her personality that affected her fighting style?

MacCoubrey: When we were designing Evie, we were always sure that she would be the one with the more dedication leaning towards the “classical Assassin” abilities. Her moves needed to be precise, intentional, and effective. Jacob’s punches can leave the opponent in the same state, but he’s messier, he likes a good fight, and kind of like a comedian knows they’re doing well when the audience laughs, Jacob knows he’s doing well when he can see his opponent struggle. So approaching Evie, she’s someone who gets right to the core of her mission. Fighting isn’t part of the fun, it’s part of the job. She performs her tasks with precision and secrecy and this is what we were going for in her fighting design.

TMS: There’s an amazing (SPOILERS AHEAD, DEAR READERS) moment when Evie and the Templar baddie Lucy Thorne have a fairly brutal fight over the key to the shroud, a piece of Eden both the Templars and Assassins vie for control over. Blood spatters as neither woman holds back during the fight, and it’s one of the moments I realized Syndicate aimed to do better by female characters in letting them be ruthless, in letting them kick the shit out of one another. Was this always the aim from the beginning, or did this approach to her combat evolve the more that Evie came to life?

MacCoubrey: With the fundamental ideas behind the creation of Evie, the ideas of having honest, capable women were reinforced throughout production. Historically, we had a lot of evidence to make it a reality in our game. If there was Evie, why couldn’t there be lady thugs? And of course there could be other female fighters as capable as her on the other side of the battleground. It was in Lucy Thorne’s early conception that the Lucy/Evie fight came to life, and it was given the love it needed by its dedicated writers and designers. All Templar versus Assassin conflicts were considered on an equal playing field, and the Lucy/Evie fight was just one of the many. That being said, I think the fact that Lucy let Evie let out some of that built up tension was a really important moment for the character. For Evie, Lucy is the first scribble outside of the lines of her colouring book, and that HAS to be infuriating. Why wouldn’t she, then, want to kick the shit out of Lucy? And don’t even dare to think that Lucy would go easy on her! 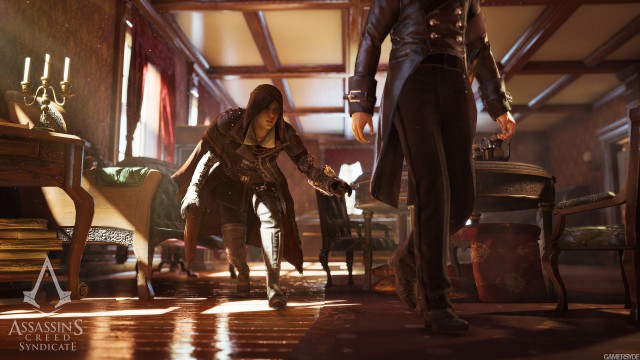 TMS: I love that Evie is the one who “gets the girl”, or in this case, “gets the guy” out of the two twins. Jacob is carefree and he’s a bit of a charmer, and I think many, myself included, might expect the story to go in the more traditional direction of giving him a love interest. To have the female star of a AAA game be the focus of a romantic encounter and for that romance to be so sweet and uncomplicated is fairly non-traditional, and I wonder how or why this decision came about?

MacCoubrey: If I remember it correctly, we designed Henry to be the connection to the greater Empire but also to have someone knowledgeable about London and the people in it. Believe me when I say that there were attempts to make Henry this overly serious soldier type, but based on one of the first bios we wrote about him it just wasn’t working. He was destined to be this capable but very bookish Assassin and Evie, being the more understanding, approachable one of the two, meshed with his ideologies and behaviors well (it didn’t help that all the writers swooned over how handsome he was)! And also believe me when I say how natural it felt to write their growing relationship. It just worked. Jacob on the other hand… his approach to human interaction is so vastly different. It’s not bad, by any means, but he pushes people away before he can even think to bring them in. He doesn’t put the same kind of effort into interactions so therefore the traditional relationship doesn’t make sense for him.

TMS: Are there specific resources (that you can talk about) your team turned to when developing Evie’s character? Were there figures in Victorian London’s history that informed the way you approached her evolution?

MacCoubrey: Oh man! That’s a tough question and not because I don’t have specific references that we worked with but mostly because before the story conception even started I had compiled a two hundred and fifty page document on historical characters we could have used based on what years we chose. So we went into this concept looking at the coolest women in a thirty year time frame, from Ada Lovelace to Elizabeth Garrett Anderson to Octavia Hill to Millicent Fawcett (and tons more)! I believe the interests of the individual writers (I for example am a huge 19th century lit nerd) combined with the needs of the game and all the research we did on the era informed who Evie eventually became.

Emma Fissenden is a writer of all trades. When she’s not pushing through her next rewrite, she’s playing too many games and working as the Editor in Chief at @noblegasqrtly. You can find her on Twitter @efissenden, or by checking out her series for TMS: Bad Gamer & Game Changer.