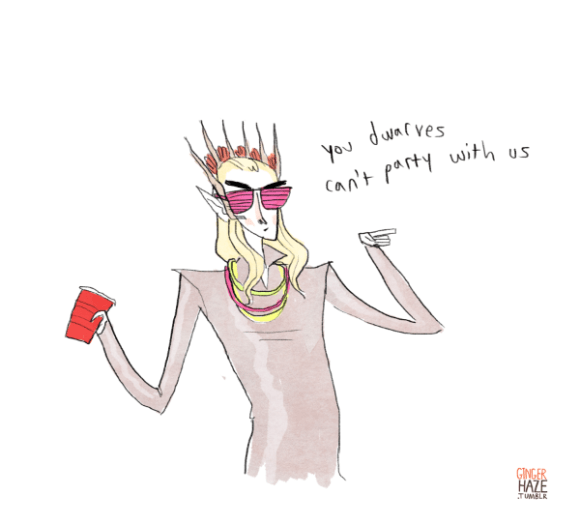 Noelle Stevenson‘s reimagined elf king Thranduil as Legolas’ speciesist party dad is here to tell you that the three Hobbit movies now have updated names, updated release dates, and updated swagger, now that his character design has been revealed in the form of Lee Pace in a shiny tunic.

We were already pretty certain that the first installment of the story The Hobbit: An Unexpected Journey would be December 14th. Sure, Peter Jackson and Co. managed to get permission to stretch the story across three films since San Diego Comic Con. But that decision was unlikely to impact a movie that’s already in the can. And, as expected, Unexpected Journey isn’t getting any changes. It’s the next two movies that will be shaking things up.

The second Hobbit film was to be subtitled There and Back Again, and set to premiere a year after the first, but that title has now been shunted to the third installment. The second movie is now, officially, The Hobbit: The Desolation of Smaug, and will premiere December 13th, 2013. Folks who were worried about waiting a whole ‘nother year again for the conclusion of the story need not fear: There and Back Again is now set to hit theaters on July 18th, 2014, as a nice Hobbity breather between Captain America: The Winter Soldier and Guardians of the Galaxy.

And if you have my guess about it: I think this shortening of the release cycle betrays the presence of a cliffhanger between Smaug and There and Back. Hopefully, hopefully, the two movies will also be shorter and more manageable than the standard Peter Jackson fare. I love you and your movies, PJ, but I also wouldn’t mind being able to watch a LotR movie without feeling exhausted two thirds of the way through.