Ka Is A Wheel 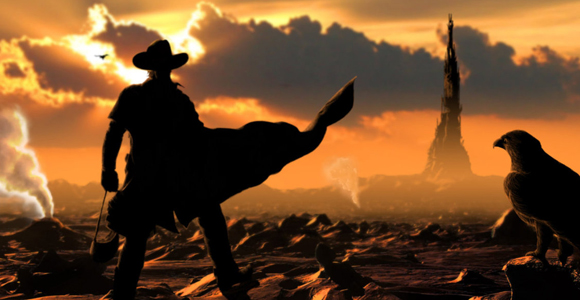 It would not be exaggeration to say that the films (and possibly TV shows) based on Stephen King‘s The Dark Tower series have been on an extreme, ridiculous, and frankly exhausting rollercoaster ride for years now.  Fans of the sprawling epic have waited with baited breath as rumor after rumor hit the internet.  The story, after all, was told in seven mostly very lengthy novels over the course of King’s entire career and also involved a great deal of his other books.  To full encapsulate the story on film or on TV will be an extremely intense project that could honestly take decades.  Especially if things continue to move the way they have for the past few years.

First Javier Bardem was attached to play Roland, the Gunslinger and lead character. Then there were budget concerns so the movie was not going to happen. Then it might happen. They even slashed the budget to make sure it could happen. They found a possible home for the planned TV portion of the story at HBO. Then Ron Howard was taking a sort of strange and slow approach to making the movie. Oh, and then they were apparently eyeing Russell Crowe as a replacement for Bardem (which: oh, please no). Then Warner Bros. passed on the project, putting it in jeopardy once again. But it is still happening! All caught up? Ready for the newest morsel of news?

I’ve had a ton of meetings on that. I just had a general sit down with Ron Howard, who is a huge fan of the show (Breaking Bad), which is such a crazy thing to even think that Ron Howard even knows who I am. They’re definitely planning on making it… I’m excited. Their goal is to do three films, but also have a television element to it, which will be very interesting. From what I hear, Eddie Dean is a pretty epic, iconic character.

The fangirl in me reads that and screams “FROM WHAT YOU HEAR?!” but apparently Aaron Paul just doesn’t have time to read thousands upon thousands of pages of Stephen King novels like I do.  Pfft.  Anyway, while clearly Paul would have the acting chops to pull off the various nuances of Eddie’s character, I’d always pictured Eddie as someone a little more classically attractive. The definite good news part of all this is that after months of silence on the project, we do know it’s still being worked on.