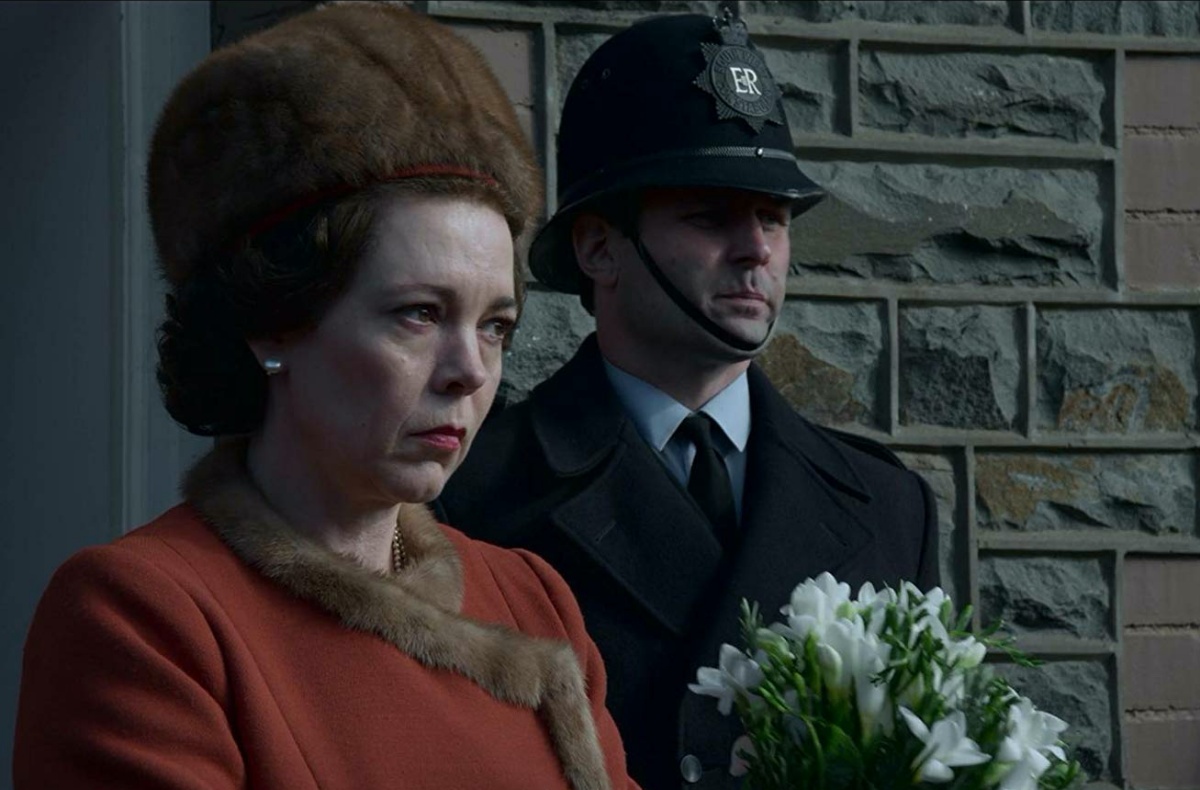 The newest season of Netflix’s The Crown tackles the time period between 1964 and 1977 for Her Royal Majesty Queen Elizabeth II, beginning with Harold Wilson’s election as prime minister and ending with the Silver Jubilee that marks the 25th anniversary of Elizabeth’s coronation. The season is good overall, with a few misstep episodes when it pulls too far away from historical fact (“Coup”), but the best episode that tackles historical fact and examines the psychology of the Crown is the Aberfan disaster in the Welsh mining village of Aberfan in 1966.

Episode three, “Aberfan,” written by Peter Morgan, is both an emotional reminder of an tragedy that happened within the lifetime of many people living today and one of the constant issues Elizabeth II faced: a changing expectation for the monarchy to be present at disasters.

One of the things the episode does effectively is show how unexpected—to the everyday person—this was. We see a classroom of children go home on Thursday, excited to sing “All Things Bright and Beautiful” to their classmates at assembly tomorrow, but once it becomes clear what the event is, we know these children will be among the 116 who will die in a colliery spoil tip at around 9:15am the next Friday morning.

For the context of the actual disaster:

The Aberfan disaster was the catastrophic collapse of a colliery spoil tip at around 9:15 am on 21 October 1966. The tip had been created on a mountain slope above the Welsh village of Aberfan, near Merthyr Tydfil and overlaid a natural spring. A period of heavy rain led to a build-up of water within the tip which caused it to suddenly slide downhill as a slurry, killing 116 children and 28 adults as it engulfed the local junior school and other buildings. The tip was the responsibility of the National Coal Board (NCB), and the subsequent inquiry placed the blame for the disaster on the organisation and nine named employees. (Wikipedia)

The National Coal Board and its employees never faced consequences, despite the fact that they dismissed many concerns of the locals and did not take the proper care in maintaining the tip.

In fact, the NCB initially wanted to offer the families £50 pounds for compensation, which was eventually raised to 500, but that was an insulting offer. The majority of this happened while the Laubor Party was in power and Harold Wilson was Prime Minister.

This was a disaster caused by poor regulation and a lack of government care, and children died for it. An entire generation was wiped out, and no one had to resign?

It’s horrific to watch the dramatization because we have pictures and firsthand accounts to remind us that the real thing not only happened, but was devastating. Many of the village’s residents suffered medical problems, and half the survivors have experienced some kind of post-traumatic stress disorder or survivors’ guilt. We also know that there were teachers like Nansi Williams and Dai Benyong, who tried to shield children from harm. Williams died saving five children using her own body as a shield.

On the Crown side, we see that, much like with Diana’s death later, there’s a huge issue with Elizabeth when it came to outwardly showing empathy. She says that the Crown doesn’t go to sites of tragedies, something we know now is more common.

As I watched the Aberfan disaster unfold, I couldn’t help but think of the climate we live in today, where we are people are dealing with a combination of man-made climate change and government deregulation allowing for disasters to happen. It reminded me of the Grenfell Tower fire, which happened just two years ago, where there were 72 deaths because the building did not meet building regulations and caused the fire to spread so quickly, and the fire service was too late in advising residents to evacuate. While the two situations have many differences on paper, the government neglect ties them together.

The Crown could never have skipped over this topic, but the show makes sure to let the audience feel the impact of this horrific incident and how little had been done, even now, to hold those in power accountable.