Review: “The Bacchae” at BAM Shines With a Female Dionysus for the Trump Era “The wise come off as foolish to a fool,” we are told in the SITI Company production of “The Bacchae” at BAM, in a moment that makes Euripides’ tragedy of Ancient Greece feel extremely applicable to our time and current socio-political situation.

This will not be the only moment in the Anne Bogart-directed play (from a new translation by Aaron Poochigian). BAM’s production, running through October 7th, sees the actors wear contemporary dress, and the costumes can have a statement-making feel: in the chorus, both men and women wear a long pleated skirt topped with a suit jacket in a nod to the fierce gender divide of the play.

On the surface, “The Bacchae” is about the destruction that rains down on the House of Cadmus in Thebes after the great city’s King Pentheus is too stubborn and pigheaded to accept that the times, they are a-changin’. The actors could wear clothing from any era and still effectively communicate the play’s central warning about disrespecting the Gods and what happens when you’re cruel to strangers coming from afar. (Spoiler alert: nothing good.)

The biggest change this production brings to Euripides is that the role of Dionysus, the God of Wine, is played by a woman, SITI co-founder and co-artistic director Ellen Lauren. Lauren is wild-eyed and comedically hamming it up at the play’s start, but grows vine-like into blooming magnificence as she embodies a God who is the equal patron of pleasure and madness. Dionysus (who also goes by Bacchus) might be known to most audience members as a free-thinking purveyor of wine and revelry—she is—but Dionysus is also “the roaring God,” dread and terrible, capable of invoking ruinous earthquakes and mind-clouding insanity.

Lauren scampers around like a folkloric trickster, sometimes seeming to skirt madness herself. Then she will saunter sexily and confident of her godhood, and you see why so many women abandon their looms and families to follow her into lushness and chaos in the mountains above Thebes. These are “the Bacchae,” the eponymous followers of Dionysus whom we never see in action but whose actions are the spur for the play’s unfolding.

In “The Bacchae,” King Pentheus rejects the new God and religion that has seemingly robbed his city’s women of all reason. He refuses to acknowledge the divinity of Dionysus—a godly product of his own house (Pentheus’ aunt Semele slept with Zeus, the God of Thunder, who fathered Dionysus—but like many of Zeus’ liaisons, it didn’t end so well for Semele). Instead of celebrating his divine cousin, Pentheus vows to punish the leader of the Bacchae, who is Dionysus in human form, and the women who are now her fervent followers.

As Pentheus, the actor Eric Berryman is astonishingly good, going from the swaggering confident bluster we’ve come to dislike these days in priggish leadership to a man driven to madness himself, too tempted by the things he professes to hate. In stark contrast to Dionysus, Pentheus is all too painfully and awfully human.

We’re meant to dislike Pentheus for his blasphemy and posturing. Why can’t he just wake up and smell the wine? His affronts to Dionysus in speech and in attempts to capture the God herself are many. He seems pig-headed because the audience is privy to the knowledge that Dionysus is indeed a God—after all, she told us so.

Yet when the play tips forward into Pentheus’ retribution and downfall, it’s hard not to feel badly for him, and then the family members forced into committing the cruelest of acts due to his folly. They are punished abominably, though their only crime is one of blood relation. Dionysus plays to win, plays dirty, and will see her disrespect corrected in the most horrific fashion imaginable.

“Gods should not be like mortals in their rage,” protests a character who clearly never dog-eared their copy of D’Aulaires Book of Greek Myths in sixth grade.

The choice to make Dionysus female here is both fascinating and effective. Dionysus has never exactly been a paragon of traditional masculinity, often depicted as long-haired, “man-womanish,” pansexual, and the product of a curious birth: he was sewn into Zeus’ thigh, described as a “manly womb” in the play, after his pregnant mother was regrettably smote by a lightning bolt for her Hera-instigated hubris.

After watching SITI Company in action, it’s now impossible to imagine the role not in female hands. Lauren plays the part with impish androgyny, but this is clearly a lady. And like the city women, she is full of rage at the old male-dominated order in Thebes. It’s time to burn it all down—in this case, quite literally. It feels as though she’s speaking from the distance of centuries directly to the hearts of women in the Trump era as “The Bacchae” progresses.

“The Bacchae” has complicated messages to convey where women are concerned. This production rather presents the Bacchae’s antics in the mountains as an exciting, transgressive escape from the plod of feminine life in ancient Greece, which was largely house-bound. The things that the Bacchae are getting up to under Dionysus’ influence are so risque and shocking for women that it’s worth risking anything to score a voyeuristic glimpse of them.

Modern women—especially those currently buffeted about by the political headwinds in America—may well understand the urge to join the lawless, wild and powerful Maenads, who wear animal skins, eschew all traditions, and nurse wolf cubs instead of the children they’ve left behind in Thebes. Yet the play also shows that these unbridled energies must come to an end, and that trips outside of the traditional power structure are often punished in the worst ways.

With a female Dionysus at the helm of this ship, and an audience with our sensibilities, however, the old themes are not so cut and dry. These newly liberated women, full of God-endowed empowerment and strength, fighting and likely partaking in other activities at night—when they’re not tearing men apart with their bare hands—sound like the smartest Thebans of all. And Dionysus, the protector of everyone and everything that is not accepted by conventional norms, seems like God who could use a popular revival at the moment.

The SITI Company production manages to be evocative with a minimum of onstage clutter. There is little by way of sets save an extraordinarily effective use—and cleaning up—of some colorful curtains that transform the entire feeling onstage when they’re in use. The prop designer deserves an award for the creation of macabre objects so gruesome in implication that you don’t want to look directly at them, yet are safe enough that your eyes can rest upon them when you just have to steal a peek.

Since this is a Greek tragedy, the chorus plays an outsize role. Audiences unaccustomed to this narrative device may be somewhat thrown, and there’s certainly far more time devoted to telling than showing; sometimes you dearly wish that they would stop speaking and let the principals play out the action.

But the chorus is refreshingly diverse and work well together, uncannily in sync. Choral members are given individual time to shine, with standouts from Barney O’Hanlon (as the blind prophet Tiresias), Gian-Murray Gianino as the shaken truth-teller who relays the story of what eventually befalls Pentheus, and Akiko Aizawa when she steps into the role of Pentheus’ unfortunate mother Agave, who had joined the bacchian revelry.

As revolutionary as the decision to have Dionysus played by a woman—for prove to me that Dionysus was not, in fact, a woman sometimes—is that Aizawa speaks her lines, and then her much longer mourning speeches, entirely in Japanese.

This is for a few reasons. Bogart’s director’s note says that it is based upon SITI Company’s “ongoing investment in international exchange” and “the creation of theater that unites historical perspectives with present-moment sensibilities.” I also interpreted it as that Agave, so lost in madness and mourning, cannot be comprehensible to the majority of the audience save in her ability to communicate the universal emotion of overwhelming loss. Aizawa is a marvel, producing transcendent levels of grief—like a shriek that seems to shake her entire being and the audience to its core. 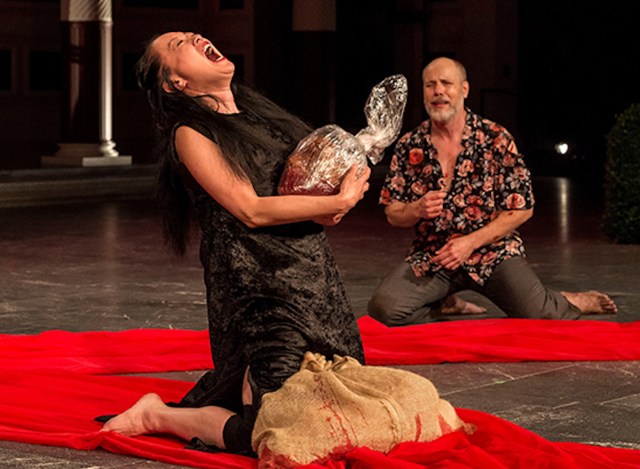 Whether the extended Japanese sequences work for you appear to be a matter of opinion, based on what I heard from audience buzz after the show. Some people thought it wildly moving, while others found the inability to know what Agave is saying ultimately frustrating. I come down between the two. It’s incredible to realize we can essentially understand the flow of Agave’s words because of the context. Yet this is the climax of “The Bacchae,” and non-Japanese speakers won’t get to know how Euripides wraps it up from the perspective of one of the Bacchae herself.

In the end, Aizawa’s performance and the choices made for her role are, most assuredly, like nothing that you have seen before. The same can be said for the entirety of this production. See it at BAM while you still can.

“The Bacchae,” directed by Anne Bogart, is part of Brooklyn Academy of Music’s Next Wave Festival and runs through October 7th. Tickets start at $30 and can be purchased here.