The Avengers Actors Talk About Their Characters, Make Us Wish For an October 2011 Release 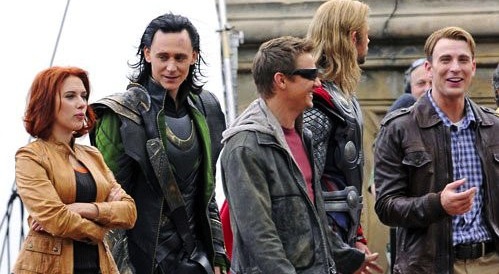 More Avengery goodness from Entertainment Weekly: Apparently, Tony Stark likes to make the Hulk angry. This is according to the guy who plays Bruce Banner/Hulk, Mark Ruffalo, who, along with his castmates, revealed a bit more about their characters. Don’t worry, it is spoiler-free. But it is also incredibly frustrating that this movie doesn’t come out until next May. 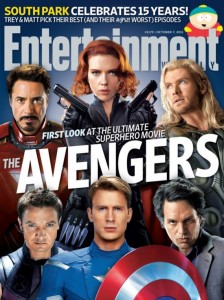 Here are a few excerpts from the actors, describing both onset experiences with director Joss Whedon and what goes through their mind when playing characters that have been part of comic fandom for decades.

Scarlett Johansson (Black Widow): “The other day we were doing this big reveal shot of all the Avengers. Thor has got his hammer, Cap’s got his shield, Hawkeye has his bow and arrow, and Hulk is huge. Then it pans over to me and I’ve got guns. Iron Man’s like, hovering above all of us, ready to go … I was like, ‘Joss… um… do I look okay holding these guns?’” Whedon’s response reassured her: “She’s a total badass. She’s a killing machine.”

Robert Downey, Jr. (Tony Stark/Iron Man), on his first meetings with Whedon: “Well, I said, ‘I need to be in the opening sequence. I don’t know what you’re thinking, but Tony needs to drive this thing.’ He was like, ‘Okay, let’s try that.’ We tried it and it didn’t work, because this is a different sort of thing, the story and the idea and the theme is the theme, and everybody is just an arm of the octopus. But what was I like?” He laughs. “As usual, just f—ing aggressive and hurtful; whatever. The usual.”

Chris Evans (Steve Rogers/Captain America): “He was a soldier, obviously, everybody he went to battle with, all of his brothers in arms, they’re all dead. He’s just lonely. I think in the beginning it’s a fish out of water scene, and it’s tough. It’s a tough pill for him to swallow. Then comes trying to find a balance with the modern world.”

(Now, after reading that, look at this picture.)

Mark Ruffalo (Bruce Banner/Hulk): “He’s the most mild-mannered guy, but a total loose cannon. No one wants to set him off except for Iron Man, except for Downey, who just wants to see him pop,” Ruffalo laughs. “It’s funny, there’s a really cool dynamic between Tony Stark and Banner. Banner actually enjoys it, and finds it really refreshing. They’re a lot alike in a strange way. They’re both these kind of scientists who are mavericks, kind of renegades. Banner, for all his mild-mannered mythology, he’s still the dude who was testing some pretty crazy s–t on himself, so he has that rebel streak in him.”

Chris Hemsworth (Thor): “I think [Thor’s] motivation is much more of a personal one, in the sense that it’s his brother [Loki, played by Tom Hiddleston] that is stirring things up. Whereas everyone else, it’s some bad guy who they’ve gotta take down… He’s constantly having to battle the greater good and what he should do vs. … it’s his little brother there,” the actor says. “I’ve been frustrated with my brothers at times, or family, but I’m the only one who is allowed to be angry at them. There’s a bit of that.”

Jeremy Renner (Hawkeye), on being the only other non-superhuman superhero besides Black Widow: “He’s the only one who can really take down The Hulk with his tranq tip arrows. He knows his limitations. But when it comes down to it, there has to be a sense of confidence in any superhero.”

This issue of EW hits stands this weekend, and it also includes bigger versions of the portraits featured on the cover.