The Archie Movie Will, Sadly, Not Feature Zombies, But A Coming Of Age Story 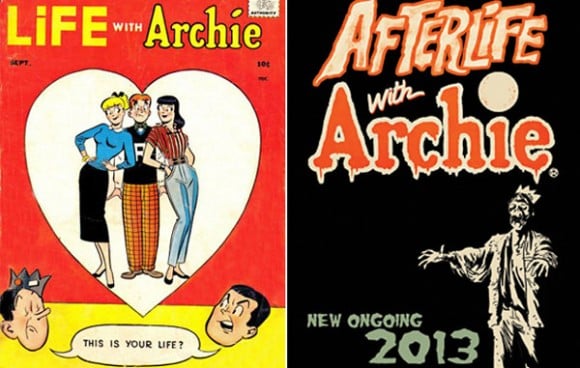 After hearing the news that there are plans for an Archie movie penned by Afterlife with Archie author and Glee writer and producer Roberto Aguirre-Sacasa was in the works, many hoped that the writers two Archie works might meet, with the so far mysterious Archie movie featuring some good old fashioned brain-eating monsters.  Somewhat predictably, the upcoming film will not be featuring zombies.  However, it will feature some favorite Archie characters and a more traditional Archie story, as Aguirre-Sacasa revealed to the LA Times yesterday.

When asked about the movie, Aguirre-Sacasa discussed expectations about the film, and some small plot details.

“The movie and this series are completely separate entities…Jon [Goldwater] and I have been talking about the movie for a while now — in fact, now that I’m remembering that breakfast where we first discussed ‘Afterlife With Archie,’ it was at a breakfast meeting for the ‘Archie’ movie, which is going to be a straight-up teen movie. It’s Archie’s coming-of-age story. Hopefully, it will be the ‘Archie’ movie people have been anticipating for 70-plus years. And here’s a tidbit: Expect to see fan-favorites Cheryl Blossom and Kevin Keller in it, in very prominent ways.”

It looks like newcomer, and Archie Comic’s first openly gay character, Kevin Keller and the wealthy Betty and Veronica rival Cheryl Blossom will both play a role in the film, along with other Riverdale residents.  The comic that caused the confusion meanwhile, Afterlife with Archie, does have something in common with the film besides its writer. Aguirre-Sacasa says that, when working on Archie projects, he sees the work as directly linked to pop culture, so

“Of course there’s an element about staying relevant — reflecting the world, reflecting current pop-culture… telling fresh, compelling stories that shake up the status-quo. I don’t want to speak for Jon [Goldwater], but it seems like his philosophy is to constantly be pushing forward, into new realms. Stagnation = death. And not the good, zombie-dead dead.”

Hopefully, this means that, like Afterlife With Archie, which is compared at various times in the article to World War Z, The Walking Dead, and “an early Peter Jackson movie,” the Archie movie continue to explore new territory even as it sticks to the basic Archie comics dynamic of teenagers living life in Riverdale.  There’s definitely hope, given that characters like Kevin Keller are featured and have already shepherded in many firsts for the 70 year old comics.  If not zombies, what plots and characters would you like to see in the Archie film? Tell us in the comments.