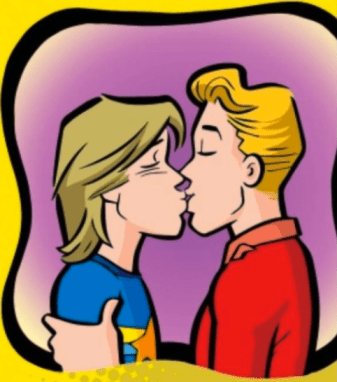 Despite the fact that his eventual wedding was covered in Life With Archie, Archie Comics apparently hasn’t published a drawing of Kevin Keller, its first gay character, kissing another guy? Or maybe it just hasn’t in a main Archie title, LWA, is, after all, a slightly more serious title that follows the adult lives of the Riverdale gang.

Way back last February when Life With Archie #16, the story in which Kevin Keller, US Armed Forces veteran returns to Riverdale to get married to his husband, was heading to shelves. One Million Moms, a numerically challenged activist group that ostensibly seeks to urge companies not to sell “offensive” products to children but whose newsworthy protests consist almost entirely of anti-gay activism, took issue with this and urged their members to try to get Toys ‘R’ Us to take the book off shelves. Toys ‘R’ Us did not capitulate, and the issue sold out, requiring multiple reprints.

USA Today describes the story of Kevin Keller #10 like this:

The Riverdale teen finds his life turned upside down after locking lips with his boyfriend, Devon, in Pop Tate’s diner, drawing the ire of at least one disapproving Riverdale mom. The woman “gets very offended and kind of pitches a bit of a fit,” said Dan Parent, who writes and draws the issue… “Kevin is kind of used to that, but Veronica records the whole thing and of course uploads it to the Riverdale equivalent of YouTube and that starts a bit of a debate.”

I see what you did there, Dan Parent. Also, you, like, totally admit that this is a “playful poke” at the controversy Archie Comics received for introducing Kevin, inspired by the Million Moms protest, and executed deliberately. Four for you, Dan Parent, you go Dan Parent!