Gay Archie Character Kevin Keller Gets His Own Miniseries 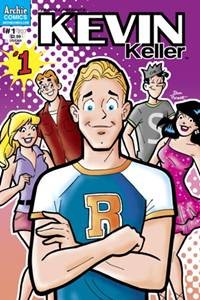 Last year Archie Comics surprised everybody by introducing Riverdale High’s newest student: the openly gay Kevin Keller. And, though there were of course the predictable detractors, Kevin’s first appearance in Veronica #202 sold out and prompted Archie Comics to do a second printing of an issue for the first time in their history.

Now, Archie Comics is giving Kevin his own four-issue miniseries, and will wade into deeper waters with the character. “The series will be set before Kevin came to Riverdale, about his school life and decision to come out.”

Archie Comics aren’t exactly in their heyday, but seeing a series that practically defines a chaste, family friendly version of American teenage sexuality and relationships make an effort to present homosexuality as just as normal and legitimate as heterosexuality will mean quite a lot to quite a lot of people.

At the moment there’s no set publication date for the series, but be careful, DC. If you don’t get your act together, Archie freaking Comics is going to headline an openly gay character in their own comic before you do.