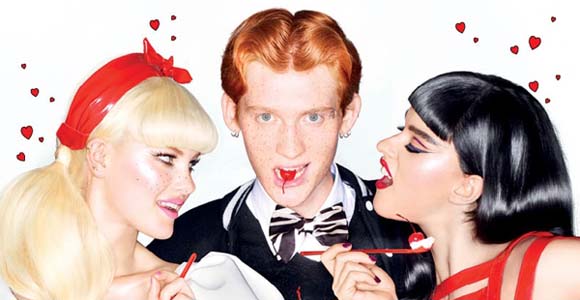 Ok, so the above image is from the MAC’s Archie’s Girls cosmetics line but this news is for real. Archie is headed to the big screen.

“But,” she said cautiously, “what direction is this live-action Archie going to take?”

According to Deadline, a “high school comedy based on the original line of Archie Comics set in present day Riverdale.” Sounds fairly simple. Though Deadline also seems to think zombies might be involved somehow considering Aguirre-Sacasa’s “Afterlife With Archie” series, but there’s no indication at this time they’ll go that route. At least not with a first-go film like this.

“We’re thrilled with the team that Warner Bros, Dan and Roy have put together here,” said Archie Comics publisher/co-CEO Jon Goldwater. “Roberto has become a prolific comics writer for us, and having Jason Moore is the icing on the cake asPitch Perfect is one of my favorite movies.”

There have been a couple of live-action Archie projects on television but are you ready to see Archie, Betty, Veronica, Kevin Keller, and more as real people on the big screen? Do you think Moore and Aguirre-Sacasa will do Riverdale justice?