Last week we covered former Harry Potter podcaster Ben Schoen’s harassment of journalist Grace Speelman after she told him she had a boyfriend, and this week we have another charming example of how men on the Internet handle being told “no” by a woman. (Trigger Warning: the email below uses abusive racial and gender-related slurs) 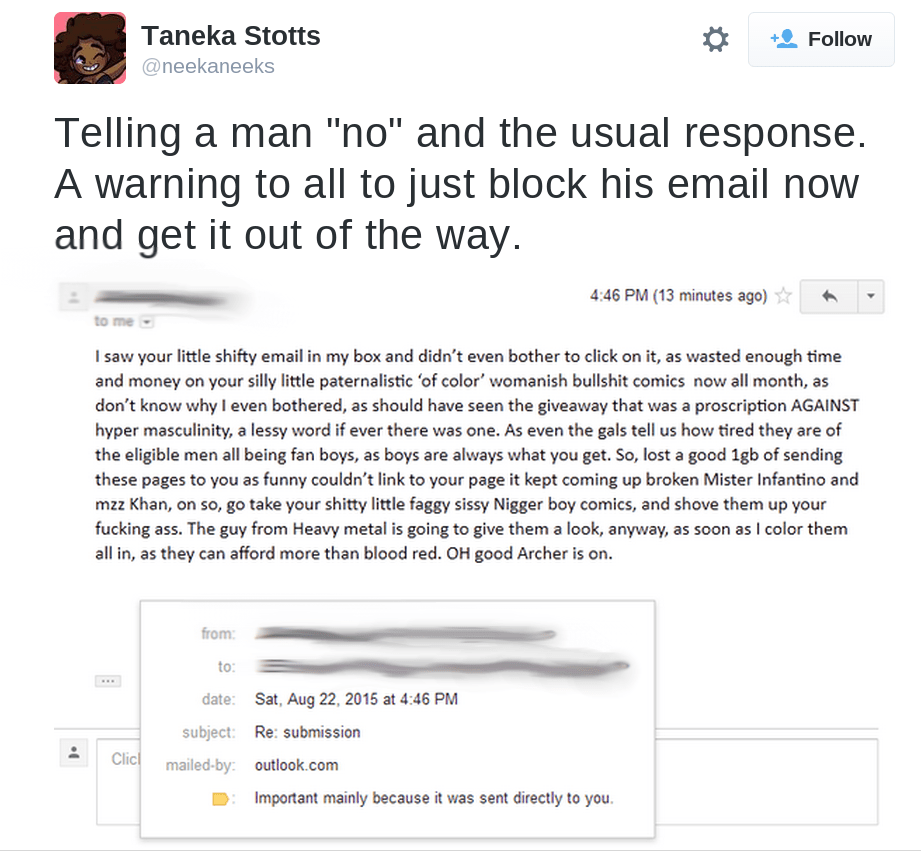 As any woman in an editorial position can probably attest, rejection on the Internet doesn’t have to be romantic to incite abusive behavior; but just because these kind of interactions take place with alarming frequency doesn’t mean they should be “all part of the job.”

We reached out to Stotts for statement about the incident, and she explained:

It has been quite the weekend, and it has brought up a lot of interesting dialog between friends and kind strangers. The language in the screenshot I posted is rough and hard to decipher, but I shared it regardless because people should see the quiet abuse that can happen behind the scenes. In general I knew that creating Elements would open myself up to comments and criticism, but I still found this surprising. After all, I’m just an indie publisher who likes to promote and showcase voices besides my own.

I have honestly never experienced an extreme reaction like this in comics, but I’ve seen and experienced quiet racism quite a bit. I’ve been around for a few years now, and originally wandered in through online study groups. Like most, I was looking for friends and experienced creators to help me grow. At that time I was still grasping the basics (I’m always learning), but realized quickly that most of these study groups were predominately full of white men. For better or for worse I stayed so that I could continue learning, but over time things began to grow uncomfortable. While most of the men I encountered were kind and helpful, there was a number of men without filters who would comment on issues they had never experienced, or who would speak out in general but without ever listening. I’ve always had a strong backbone, but on occasion things would go too far. When I began to question or call out certain members for their off color commentary, they seemed genuinely surprised to be questioned, and their responses were usually mocking jokes to diffuse the situation, or to ignore me entirely. I have been called everything from “sensitive” to a “reverse racist” which just highlights their inability to engage in a proper dialogue.

Today, those men in question have never moved past that study group and have not done anything of significant merit. However, I went in an opposite direction, fueled by my passion to create and to listen. I now have the Beyond Anthology under my belt, and I’m gearing up to do even more projects, like Elements, in the future.

One of my rejects emailed me for FOUR MONTHS after he was turned down. When I wouldn’t respond, he started emailing my friends..

Another dude began demanding to know who took ‘his” spot, and started suggesting who I should kick out to make room for him.