After three years of geeky events, celebrity interviews, and looking at the stories I love through the prism of communities I love and issues I care about, today is my last day at The Mary Sue.

Way back in 2009, when dinosaurs roamed the Earth, I decided to leave acting behind to pursue the thing I’d been doing since I was three years old: writing. Fiction writing was always my first love—shout-out to the Star Trek: TNG and Alien Nation fan fic I wrote when I was 11—but I also loved paying bills. So, I sought out publications to write for that would allow me to pair my love of writing with my love of speculative fiction in all its forms.

I worked part-time day jobs while piecing together a freelance writing career one article at a time for outlets like Tor.com, PopMatters, Newsarama, and Latina Magazine. It was a really difficult few years, piecing together five or six jobs to bring in one sort-of livable salary. While I loved the freedom of it at first, the hustle for every single article was exhausting. Still, I was (mostly) writing for a living, which is all I wanted to do.

In the years I did that, I happened to meet a lovely young woman named Jill Pantozzi, a.k.a. The Nerdy Bird. We got to know each other over the course of seeing each other at geeky event after geeky event. Her blog at the time, “Has Boobs, Reads Comics,” was a regular stop for me in my daily internet surfing. As I continued to freelance, Jill worked her way up to a sweet gig as the Editor-in-Chief of a female-focused geek site I was rapidly falling in love with called The Mary Sue.

Around the end of 2014, I applied for an available Weekend Editor position here at TMS. And….I didn’t get the gig. Womp-womp.

Cut to March of 2015 when I ended up being one of Jill’s last hires as Editor-In-Chief. My job here at The Mary Sue was the first time I’d ever been paid a full-time salary for my writing. That’s not something you easily forget or take for granted. I mean, check out how happy this kid was on her first day: 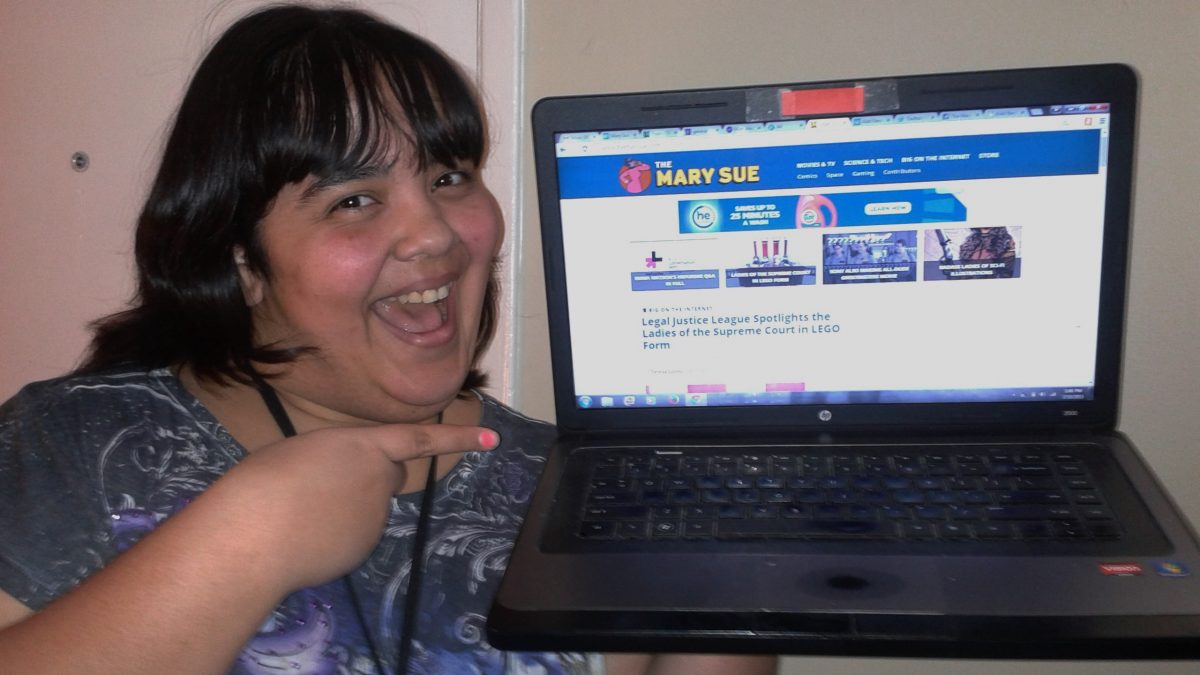 Me and my first post for The Mary Sue – March 2015. Image courtesy of Teresa Jusino

I will always be grateful to Jill for taking a chance on me and giving me my first full-time writing gig. Jill was an amazing editor, and I learned so much getting to work with her.

Along the way, I got to work with some other pretty amazing people. Carolyn Cox (Thank you for everything!), Sam Maggs, Jessica Lachenal (I’m glad we got to be newbies together), Sam Riedel, Alec Bernal (ever-grateful for your editing skills!), Keisha Hatchett, Maddy Myers (our Westworld reviews were a highlight of my time here), Carly Lane (thanks for taking care of Supergirl Radio for me!), and MaryKate Jasper: working with you lot every day was seriously the best part of having this gig. But I feel like we haven’t really stopped, since I’ve been social media-stalking all of you since you left. You’re welcome.

I will also be forever grateful to the illustrious Dan Van Winkle, who is the only current member of the TMS family who was here when I was hired. Dan, too, is an amazing editor and leader who’s steered this ship through some pretty big changes while also being a true ally in every sense and more often than not being perfectly happy to be the “token white guy” and give the ladies the floor. Thank you for everything.

And the rest of the amazing current team: Kaila Hale-Stern has been killing it as Co-EIC since she came on, and is an absolute sweetheart to boot. Vivian Kane, Charline Jao, Princess Weekes, Daniella Bondar, and Chelsea Steiner have each brought with them an amazing new energy, wit, and perspective that has broadened what The Mary Sue can be. I am going to miss all of you, and I’m so grateful that I’ve gotten to work (and laugh, and vent) alongside such kind, inclusive, hilarious, and intelligent women. Your voices are magic.

Like I said, it’s hard for me to say goodbye today, so I hope you’ll forgive me this long-ass ramble. Especially since I’ve reserved my final thanks for you, the readers.

The TMS commenting community is one of the smartest and and most compassionate groups of people on the Internet. I’ve received so many kind comments and emails about my work, or insightful comments about the topics I’ve addressed. Even when I’ve received criticism, it’s always come from a place of passionately caring about the world around you, and wanting to hold me and this site accountable for our mistakes and asking us to be ever better. I have a huge amount of respect for that, and I thank you all for caring enough to be so engaged.

I’m off to take a new full-time gig for a company I believe in in an industry completely unrelated to pop culture or entertainment. That job will sustain me as I continue to pursue the thing I love most of all: writing stories. As I move forward in my career and my life, my goal is to tell the kinds of stories I’ve spent the past several years writing about critically.

If I’m lucky, maybe one day in the not-too-distant future, The Mary Sue will cover some TV show or film I’ve written. That’s when I’ll know I’ve “made it.”

farewellsgoodbyesso long and thanks for all the fish