A Ten Year Game of Civilization II That Won’t End 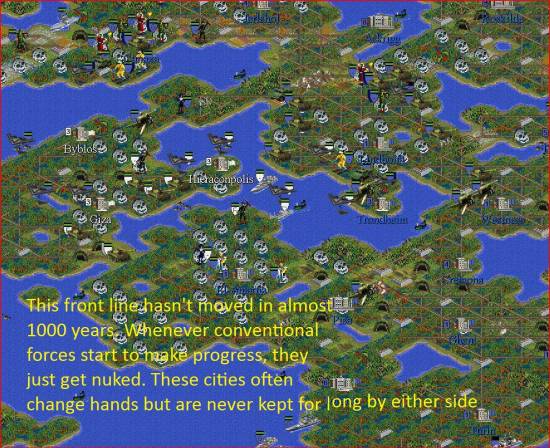 Redditor Lycerius has been playing one single game of Civilization II for ten years. As far as this avid Civ connoisseur is concerned, Civ II is the second best main entry into the series, behind Civ IV, so there’s no reason not to play it all the way into 2012. Lycerius, however, has been playing one match for a decade, and the three-civilization war he’s been fighting has been at a stalemate for over one thousand years, with the entire campaign currently at 3991 A.D.. Aside from that feat being amazing enough on its own, it’s how the world is shaped and exactly why the war has been a thousand-year stalemate that is both simultaneously so fascinating and hilarious.

Lycerius is fighting a war against the Vikings and the Americans, while he is playing the Celts. Everything about his current campaign is hilarious. Lycerius was trying to play as a democracy, but was forced to switch to communism to survive. The way a democratic nation works in Civ II is that you can’t usually instigate a war while you’re in peacetime, but every single turn the Vikings would automatically attack, thus breaking the treaty. His citizens wouldn’t allow him to start the war before the Vikings inevitably attacked, so the democracy put him at a disadvantage. Funny, that. Even funnier, the Vikings and the Americans, the other two superpowers, are theocracies.

In order to survive the onslaught of Viking and American troops, Lycerius is forced to dump all of his resources into the war effort, rather than city improvements that would maintain some level of citizen happiness, including a store of food. Due to this, the citizens are always unhappy — a sore point for people who played the earlier games in the Civ series.

Whenever his troops make any sort of advance on the front lines, the computer opponents immediately nuke the effort, not only destroying the advancing units, but making the surrounding land inhabitable, rendering any sort of terrain improvement impossible. Late game worker units, Engineers, have an ability to clean up the pollution left from nuclear fallout in order to make the terrain usable once again, but are stuck in a cycle of building roads to help the war units travel to the front lines faster, as his front line units and roads get destroyed every turn by pillaging enemy forces.

The land that hasn’t been destroyed by nuclear war has been turned into swampland, which isn’t farmable, due to the ice caps having melted twenty times, and the Engineers don’t have time to clear the swampland for the same reason they don’t have time to clear the nuclear pollution. Ninety percent of the world’s population has died off due to nuclear war or famine caused by global warming.

The current war has been fought for around 1,700 years. Because of the SDI improvement, ICBMs aren’t usually used on cities, so any type of city attack is carried out through the use of spies infiltrating a city and planting an explosive.

Hilariously, Lycerius’ goal for the next few real life years is to try to end the war. He provided some screenshots and explanations of how the world looks:

Basically, Civilization is the best and you should be playing it. Unless it’s Civ V.