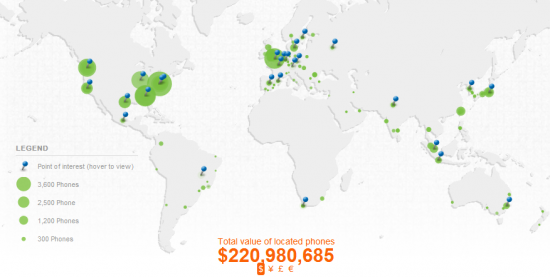 We all know that terrifying feeling, the one where you reach for your phone and its normal pocket is suspiciously vacant. It’s a very distinct, panicky, sinking sensation. Lookout Labs, a company that produces an app aimed to prevent this feeling, has complied a handy list of cities in which you are least likely to actually find your phone while frantically slapping all your pockets or rifling through your bag, a list of the top ten cities where phones get legitimately lost or stolen, and not just put in an unusual pocket. The results might surprise you.

In an attempt to keep you from wildly skimming to the bottom of this article looking for the list proper, here it is right now:

You might think the number of losses might correlate with the population, at least in the U.S. where it’s safe to assume that everyone has a mobile phone. That doesn’t seem to be the case, however. Phildelphians are more likely to find themselves short a phone than New Yorkers are, despite the fact that the population of New York City is over five times that of Philly. Lookout offers up another possible explanation:

“Interestingly, many of the cities with highest rates of lost phones also were in the top ranks for the FBI’s most recent crime stats.”

While your opinion may differ as to whether that’s “interesting” or “not surprising at all, frankly” it does provide a little insight as to the lack of direct correlation between population and loss rate. And although Lookout says that lost phones are significantly more common that stolen ones, an increased crime rate could sure turn “misplaced” into “stolen” pretty fast.

In addition to just indexing loss-plagued cities, Lookout looked into the specific kind of places phones are lost. Coffee shops, bars, and the like. These differ from city to city (New Yorkers are far less likely to be in automotive shops than say, Clevelanders I would imagine) the top overall read a little something like this:

I’m sort of stunned that bar didn’t manage to beat out coffee house, considering the beverages one tends to drink in each.

Lookout Labs collected this data from their 15 million users across the globe, many of whom use the company’s app which can be used to make a lost Android or iPhone “scream” remotely so that it’s easier to find. It’s unclear exactly how they collected this data, which makes it a little difficult to parse. If their stats are largely based on when users engage the scream feature, things might be skewed by all the people who merely misplaced their phone under a pillow on the coach as opposed to those who left it in a bar bathroom. If that is the case however, it speaks to how many people really do lose their phones in public. If it isn’t, people sure do leave their phones at other people’s apartments or condos frequently.

Lookout reports that $7 million worth of phone is lost each day when it comes to Lookout users alone, and that this stands to be a huge collective loss if none of these were to be recovered. This is, of course, a great argument for getting something like the Lookout App that can help you find your phone if you lose it. It is also a great argument for just keeping an eye on your things. It’s sort of amazing to me that a smartphone can be lost at all. Between calls, text, web, music, games, and podcasts, I’m never not using my phone much less setting it down places. But now I’m just tempting fate, aren’t I? Good thing I’m not in Philly, at least.

Check out more information in the form of interactive maps over at Lookout’s Mobile Lost and Found site.