Tales From The Borderlands World Premiere | The Mary Sue 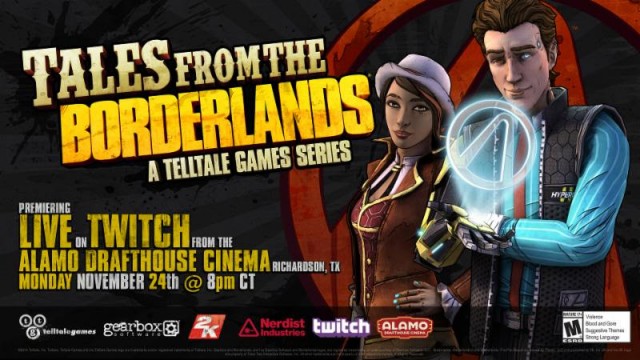 Ever played a point-and-click adventure game and thought, “You know what would be really cool? If they put this game on a big movie screen and made the entire audience vote in with their suggestions of which dialogue options to choose like a giant well-organized version of Twitch Plays Pokémon“? Well, good news! If you’re a fan of the Borderlands games and you live in Texas—so, you know, in an actual border land—then your dreams are about to come true.

Telltale Games is joining up with Gearbox Software and the Alamo Drafthouse in Richardson, Texas to celebrate the world premiere of Tales from the Borderlands with a live screening and play session next week on November 24th. Tickets appear to already be sold out on the Alamo Drafthouse’s website, but never fear: Nerdist will also be live-streaming the event on Twitch starting at 9pm ET (6pm PT). Of course, you won’t be able to affect the gameplay from your living room in the same way that the live audience members will, but at least you’ll know what to expect when you get the game yourself, right?

Tales from the Borderlands plays episodically, so you don’t get to shoot and maim as much this time around, but you do get to participate in a story that’s just as funny as we’ve come to expect from this franchise—and from the trailer it doesn’t seem like that story skimps on the action, either. You play as both Rhys (Troy Baker), a Hyperion company man, and Fiona (Laura Bailey), a con artist; Patrick Warburton, Chris Hardwick, Nolan North, and Erin Yvette also provide voices for the supporting characters.

Here’s the official trailer, which was released last week:

I’m pretty excited to see how this game turns out: the Telltale aesthetic lines up fantastically with that of Borderlands, and I’m always down for more Patrick Warburton in my life. The game releases on November 25th for PC, Mac, OSX, Playstation 3, 4, and the Vita, and XBox 360 and One. Happy vault-hunting! (Kind of).