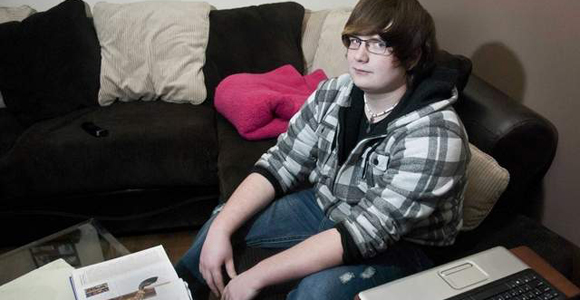 Yes, it’s true, we have rules in our society for a reason but in my mind at least, there’s times when rules should be bent for the greater good. This is one of those occasions. J.T. Gaskins was recently suspended from his high school. Why? Because the long hair he was growing to donate to Locks of Love violated school policy. Did we mention he’s a cancer survivor himself? Sigh.

The 17-year-old goes to Madison Academy, a charter school near Flint, Michigan. He told the Detroit News “he decided over the holidays to grow out his hair and donate it to Locks of Love after learning that the sister of a family friend had cancer.”

For those of you who aren’t familiar. Locks of Love is a “public non-profit organization that provides hairpieces to financially disadvantaged children in the United States and Canada under age 21 suffering from long-term medical hair loss from any diagnosis,” according to their website. Many years ago I donated my hair to their cause and know several others who have as well.

Gaskins was diagnosed with leukemia as an infant and has been in remission since he was 7. He’s an exemplary student at the school, even recently honored on their “Wall of Fame” for perfect behavior, yet that or his reasons for the hair growth, didn’t make a difference to school officials.

According to Detroit News, “Madison Academy on Friday referred calls to Will Kneer, vice president of Romine Group Inc., in Utica, which manages the school. Kneer told the Associated Press the board has decided to keep its policy for now.”

The report says Kneer “proposed that Gaskins use styling gel, put the hair in cornrows or simply comb it to comply with the rules. ‘I need his hair out of his eyes and off the collar,’ Kneer told the Associated Press. ‘I really want this boy to be back in school. I feel like combing his hair wouldn’t be a big concession … He doesn’t have hair down the middle of his back. It’s an inch over his collar.'”

But that’s obviously a short-term solution to Gaskins’ long-term cause. He’s only at two and a half inches of the ten he needs to donate to Locks of Love. “I’m fine with all of their rules,” said Gaskins. “I just think that with this, they could try to make a compromise.”

Gaskins’ mother, Christa Plante, is behind her son’s decision, as are at least 5,000 others. A petition was drawn up on Change.org by Plante asking the school to change it’s boys’ hair policy for donation purposes.

“I fought cancer my entire life. I’m going to keep fighting this,” said Gaskins. “I’m not going to not give back just because my school says no.”