Tearful Robber Holds Up Papa John’s for Money, Walks Away With Pizza Instead 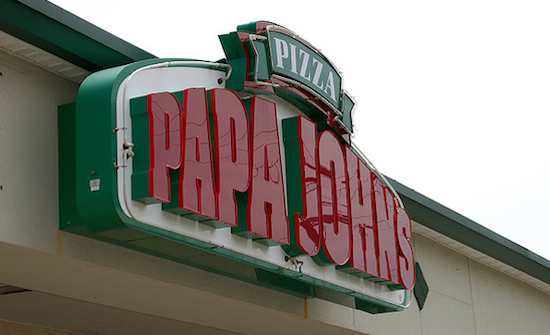 The cardinal rule of any successful robbery — whether it be a bank, store, or any other establishment carrying copious amounts of cash — is to maintain control of one’s emotions throughout the duration of the forced transaction until it is complete. In other words, do try to keep it cool. A neophyte robber in Helena, Montana failed to heed this adage when holding up a local Papa John’s, turning what otherwise should have been a tense situation into an awkward one when he broke down and started bawling in front of the clerk and everyone waiting in line for pizza.

The botched robbery occurred earlier this week when a man in a sweatshirt entered the restaurant wearing a bandana around his face to conceal his identity. He started out well enough by handing the cashier a note demanding money, but things suddenly took an odd and unexpected turn when the robber began crying and confessed that he was merely a victim of circumstance, having been pushed to edge of desperation to support his family during these harsh economic times.

Instead of immediately contacting police officials and watching the man get hauled away, the clerk lent the man a sympathetic ear and sent him on his way with a pizza and chicken wings. Helena police chief Troy McGee lauded the clerk for properly handling the situation and preventing it from possibly escalating into something far worse, as the robber had reportedly carried a large knife on his person that he, thankfully, didn’t use.

Helena police have no leads regarding the mystery robber’s identity, but they hope to locate him soon before he attempts another similar stunt given the motivational drive behind his misguided act. We have to give the robber a little bit of credit, though. He may not have walked out with a bag of cash, but a load of fast food on the house seems like a pretty tasty deal in the end — even if it does wreak havoc on the ol’ digestive system.