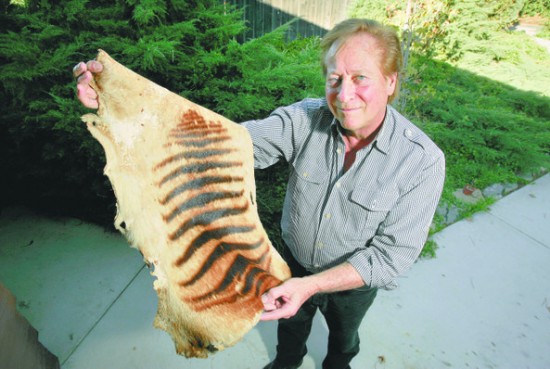 Bill Warren made one of the better yard sale deals we’ve seen when he purchased what looks a lot like a Tasmanian tiger pelt for $5.

The Tasmanian tiger, despite its colloquial name, was a marsupial that looked more like a dog than anything else.  It was discovered by Western science around the year 1800, and the last known member of the species died in captivity in 1936.  The last real thylacine pelt sold at auction for $68,000.

Unfortunately for Warren, he is unable to sell the pelt out of state, due to a kink in US endangered species laws.

He can’t sell the pelt over state lines because it’s still listed on the endangered species list by the U.S. Fish and Wildlife service. Even if it is an oversight, it will take precious time to petition the department to remove the animal from the list.

Of course, verification on the pelt has yet to be confirmed.  Warren has heard from John Long, the vice president of research and collections at the Natural History Museum of Los Angeles,who told him by email that it certainly looked like a Tasmanian tiger, but that “only expensive testing,” presumably based on DNA, would be able to confirm it.

Warren plans to use the any money garnered from the sale of the pelt to fund his, yes, treasure hunting business, which searches for shipwrecks.

No, we’re not kidding. We’d wish him luck in his search for things of hidden value, but it appears he’s already got it.