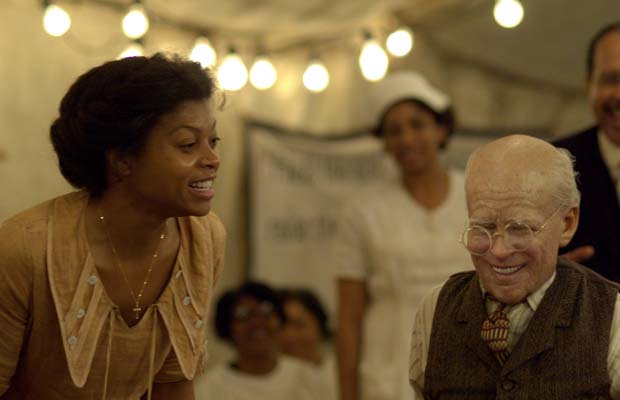 Taraji P. Henson’s fantastic Academy Award nominated performance in The Curious Case of Benjamin Button as Queenie is now a much more bittersweet watch with the news that Henson was apparently paid what she called “the equivalent of sofa change” in comparison to her co-stars Brad Pitt and Cate Blanchett.

Vulture shared a passage from her new memoir, Around the Way Girl, where Henson reveals that when negotiating salaries she not only received significantly less but also had to pay her own locations fees–three months of hotel expenses. While some may argue that Henson’s role was smaller in comparison to Pitt’s or Blanchett’s, the discrepancy is way too big. She was third on the call sheet and they were paying her “2 percent of what it’s paying the person whose name is listed first.” Henson points out this is a result of how “there are way more talented black actresses than there are intelligent, meaningful roles for them, and we’re consistently charged with diving for the crumbs of the scraps, lest we starve.”

Henson states she took the role because if she had pushed for more, she would have been “replaced and no one would so much as blink.” Here’s the full story from Around the Way Girl:

Both Brad and Cate got millions. Me? With bated breath, I sat by the phone for hours, waiting for Vince [her manager] to call and tell me the number that I thought would make me feel good: somewhere in the mid six figures — no doubt a mere percentage of what Brad was bringing home to Angelina and their beautiful babies, but something worthy of a solid up-and-coming actress with a decent amount of critical acclaim for her work. Alas, that request was dead on arrival. “I’m sorry, Taraji,” Vince said quietly when we finally connected. “They came in at the lowest of six figures. I convinced them to add in a little more, but that’s as high as they’d go.” There was one other thing: I’d have to agree to pay my own location fees while filming in New Orleans, meaning three months of hotel expenses would be coming directly out of my pocket. Insult, meet injury.

Henson’s infuriating anecdote about the 2008 movie is still incredibly relevant and a valuable reminder that when we talk about progress in representation women of color are often left behind, undervalued or forgotten altogether. She does write, however, that her role in Tyler Perry’s I Can Do Bad All by Myself raised her quote and made it so she “never had to take another movie project at the rock bottom of six figures.”  While Henson is doing very well now, with Empire and Hidden Figures, there are plenty of other “solid up-and-coming” actresses of color dealing with the same thing and I hope her openness will push others to keep Hollywood accountable.

(via Indiewire, image via Paramount)