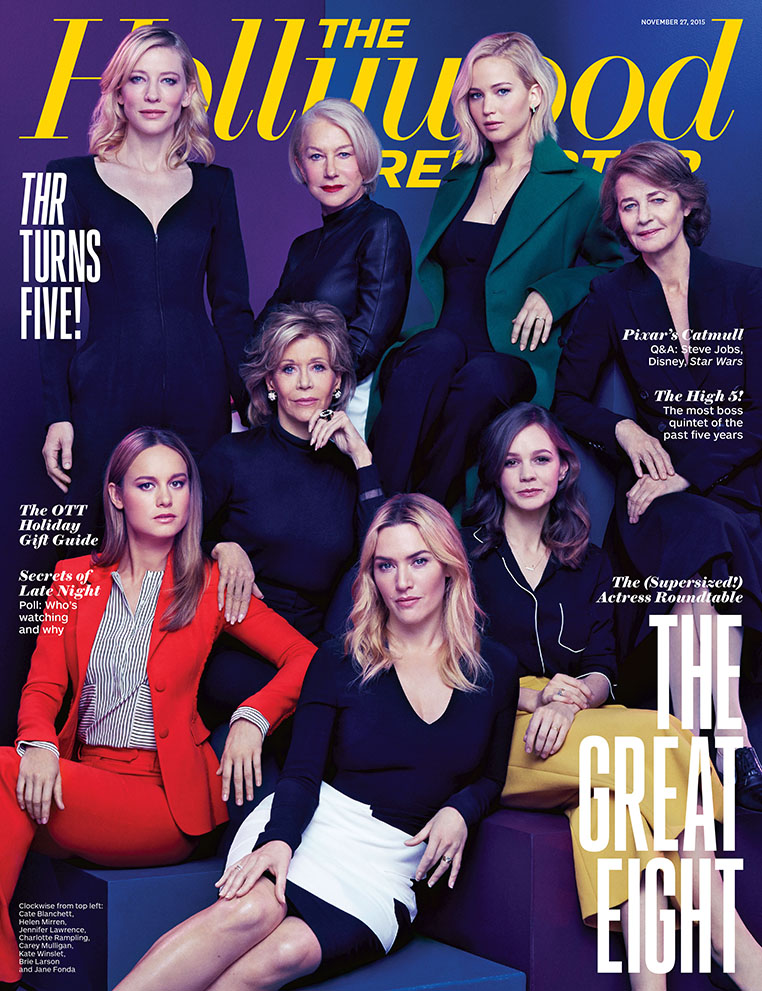 If the Gods of Egypt fall-out wasn’t enough to make you gag on this disturbing trend of whitewashed images on the big screen, then brace yourself for today’s episode of Hollywood being completely dense, oblivious, and frankly stupid when it comes to intersectional feminism.

The Hollywood Reporter, a magazine publication that focuses on the news emerging from film, TV, and entertainment, published a cover featuring “eight of the most acclaimed” actresses (and I’m using air quotes as well here) who are an amalgam of Oscar contenders and previous winners–Cate Blanchett, Helen Mirren, Jennifer Lawrence, Charlotte Rampling, Carey Mulligan, Kate Winslet, Brie Larson, and Jane Fonda.

Per usual, social media got wind of the cover and reacted accordingly. I tweeted the link and expressed my contempt for the disconcerting image.

The Hollywood Reporter’s Stephen Galloway wrote a low-key condescending editorial explaining the process of how and why the women were selected, and his thoughts on the erasure of women of color:

Yet even for me, a white man, it was impossible to ignore the fact that every one of these women was white — whether old or young, English, Australian or American. That was appalling. The awful truth is that there are no minority actresses in genuine contention for an Oscar this year. Straight Outta Compton, which has provided some great roles for African-American men (and whose success addsproof that studios ignore minority audiences at their peril) had no women leads. Furious 7? Not quite Oscar bait.

Optics matter. Galloway’s explanation here seems sincere, but his editorial decision erases women of color while highlighting white women. The cover doesn’t challenge the narrative of racial bias in Hollywood, but instead encourages it. If the title of the article was “Why Are Women Of Color Dismissed In Hollywood?,” featuring the monolithic image of white actresses, the cover would in fact make sense and also the context of the issue would be in alignment with his opinions on the subject. Instead, Galloway reinforces the systemic bias in Hollywood by featuring a roundtable of white women and calling them the eight of the most talented actresses alive in Hollywood.

To further point out the hypocrisy behind his claims, previous Oscar winners (not current contenders) are also featured on the cover. Was it difficult to find Lupita Nyong’o or Halle Berry? These are two Oscar winners who have had made a major impact in Hollywood. Rather than spending time on an editorial to explain your “what had happened was” moment, take the initiative and hold Hollywood’s feet to the fire. Push for systemic change. Challenge the status quo. Focus on the shortcomings, disparities and racial bias that continue to perpetuate the idea that women of color are an afterthought in mainstream media.