Diary of A Girl Next Door: Betty Archie Comics | The Mary Sue

Interview And Sneak Peek With Tania del Rio, Author Of Diary of A Girl Next Door: Betty 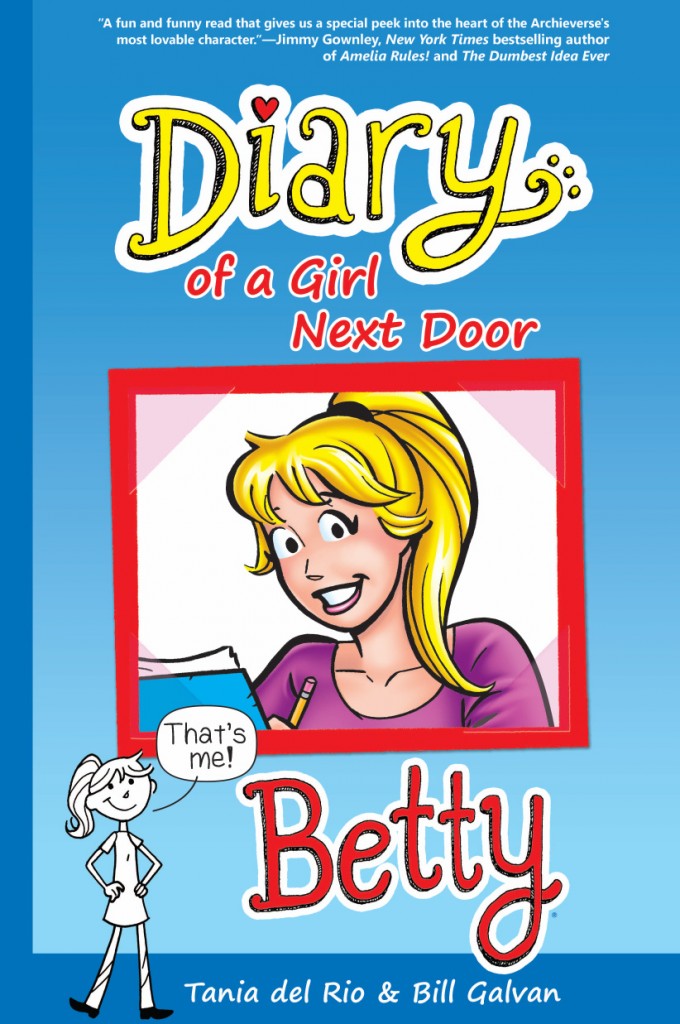 For the first time in Archie Comics history, the gang’s adventures are playing out in prose. Using a funny, relatable tone (and plenty of great doodles!) Diary of a Girl Next Door follows “Riverdale’s resident overachiever” during her first year of high school as Betty struggles to balance school, family, friends, and her feelings for a certain red-headed classmate. There are only 720 days in the average high school career. That’s 720 days for Betty to define the rest of her life forever!

The Mary Sue had an opportunity to interview Girl Next Door author Tania del Rio (also known for her fabulous work on the Sabrina manga makeover). Read on to preview the book’s first chapter and hear del Rio’s thoughts on dancing yetis, Betty as a doodle, and sending a positive message to young readers.

Carolyn Cox (TMS): The unique voice of Betty‘s Diary had a big impact on me growing up. Were there any particular already-published stories that inspired Diary of a Girl Next Door: Betty?

Tania del Rio: Well, diary-style books are very popular right now. I believe it may have started with Diary of a Wimpy Kid, but now you can find diary-style books about all kinds of characters, even in the Star Wars franchise! It just makes sense to have Archie characters tell their story in a similar format! As for the individual stories in Diary, those were almost all inspired from my own childhood experiences and diaries that I wrote all through middle and high school.

TMS: Along that same vein, do you think publishing an Archie story in book rather than comic form will change its impact on readers?

del Rio: I don’t think it will impact readers too much. In fact, I think it’s a perfect bridge between comics and prose. Diary may look like a traditional book, but it’s still illustrated with little doodles accompanied by word balloons, so it’s not unlike reading a comic book—comic fans will be able to jump right in. On the flip side, readers who maybe haven’t been exposed to comics will be introduced to the Archie characters in a way that might compel them to start reading other Archie comic titles!

TMS: Considering the book sends such a strong message about friendship and independence, were you concerned at all about portraying  Betty and Veronica’s competitiveness over Archie?

del Rio: Conflict is what drives a story, and I feel like the Archie-Betty-Veronica love triangle is such a classic and enduring theme, it would have been wrong to ignore it in Diary! And let’s face it—no one’s perfect. Even strong, independent girls can get pulled into petty fights—especially when they’re teenagers and hormones are raging. I think these little fights are what help characters grow and learn to become more mature.

TMS: Are there any plans you can share for more stories in a similar format?

del Rio: More stories are definitely a possibility (maybe even one from Veronica’s point of view!). If you’ve read and enjoyed Diary of a Girl Next Door, it really helps if you review it online, or let Archie know how much you liked it, and more books will be sure to follow!

TMS: Could you speak at all to how the illustrations influenced the story and vice versa? I really loved the gang’s new physicality!

del Rio: I love how the illustrations turned out—it was really fun getting to see the Archie kids portrayed in doodle-style, with so much energy. The drawings all came after the writing was already done, but Bill Galvan did such an amazing job—he literally drew things just as I imagined them in my head. I didn’t even have to give him any notes.

TMS: I love that both Sabrina and Betty are positive but fallible role models. Were there similarities in how you approached these characters?

del Rio: I think that just might be a little bit of “me” coming out in both characters. Whenever I write, I do tend to draw from my own experiences and emotions. I always tried to be a “good” kid growing up, but obviously I had plenty of moments where I was petty, manipulative, lazy, or jealous, and I would get into the most ridiculous fights with my best friend. I really enjoy flawed characters because it feels more real to me. I’m all for “strong female protagonists,” but sometimes these types of characters are portrayed as so perfect they become boring.

TMS: Did you have any real-life inspiration for the Yeti Thrill movies?

del Rio: Nothing specifically, though I was bit of a fangirl growing up. My interests were always a little weird: Jim Carrey films, Animaniacs, The Hunchback of Notre Dame Disney film (I saw it maybe 8 times in theaters!)… I wanted Betty to have something weird too, something she could fangirl over. I tried to think of something absurd that could be considered a cult classic, and also something that Veronica would be embarrassed to admit being a fan of in public. Why not dancing Yetis? I’m also a fan of urban dance films, especially Breakin’ 2: Electric Boogaloo, so maybe that’s where the original idea stemmed from!

TMS: If you could give a teenage girl one piece of advice on her first day of high school, what would it be?

del Rio: Relax. It will be OK! It may seem overwhelming at first, but by the time you leave high school you’ll look back and be able to see how far you’ve come (plus, you’ll secretly get a kick out of seeing the new freshmen class come in with looks of terror on their faces!).

Diary of a Girl Next Door: Betty is available now on the Archie Comics store and Amazon.