"Don't run out of tampons or it's GAME OVER." Just like in real life! 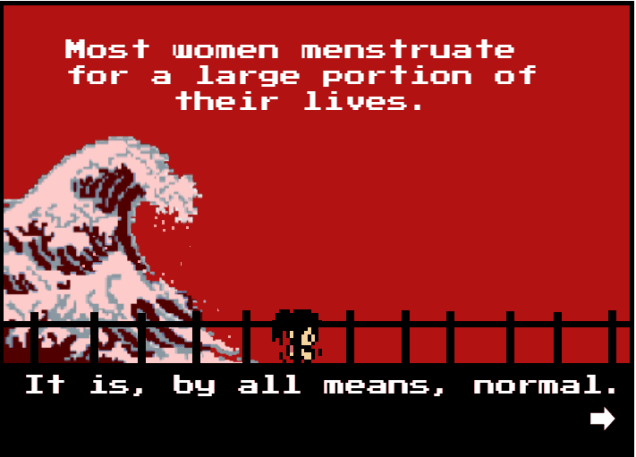 Just about half of the world’s population is capable of menstruation, and yet when it comes up in conversation, people sometimes act like it’s the grossest thing to ever conceivably happen to a human being. You know what those menstruhaters need? A tampon to the face. Or, you know, better education and a society that teaches them not to be so squeamish about others peoples’ bodies, but gosh—throwing tampons is so much more cathartic.

Tampon Run was created by Andrea Gonzales and Sophie Houser, two NYC high school students who met at an immersive summer camp program called Girls Who Code. It represents their final project for the program and is meant to open up a dialogue about menstruation in an accessible and non-judgemental way. “The taboo that surrounds [menstruation] teaches women that a normal and natural body function is embarrassing and crude,” the opening instructions read.

In the game, you jump and shoot tampons at your enemies, who all appear to be men in pink hats of various walking speeds. Knocking down each enemy gets you a point, but also loses you a tampon; if the enemies come into contact with you, they end up stealing one of your tampons anyway. However, there are boxes of tampons throughout the game for you to replenish your stock.

On the subject of whether or not making feminine hygene products into weapons might not be the best way to “destigmatize” them, the game has this to say: 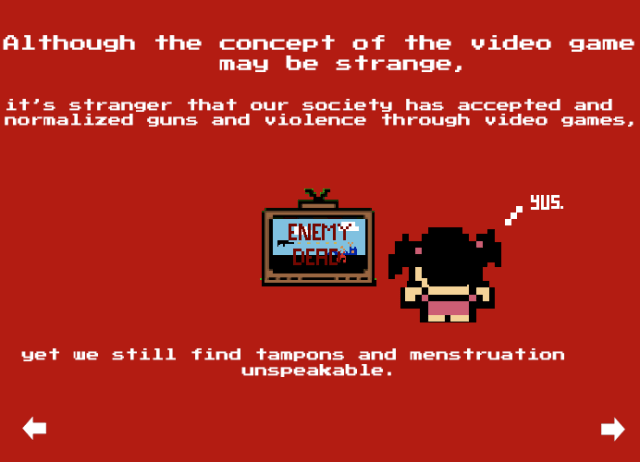 Or, in layman’s terms, “I don’t see any of you complaining that games make violence look bad! Taste my plastic pearl applicator, jerks!” Well, can’t argue there.

You can play the game for yourself on the Tampon Run website. Be warned, it’s kind of addicting and pretty dang well done. You don’t suppose Girls Who Code has a program for grown adult women, do you?

Previously in girls who code