The Sexy Viral Tahiticora XBox Video: The Making Of (Update) 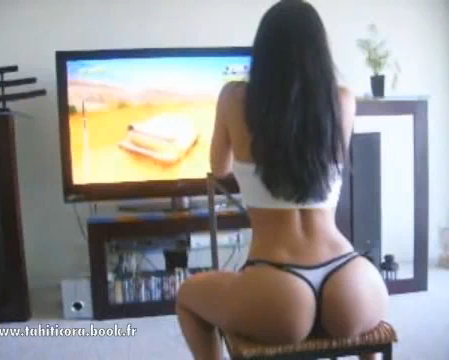 If you’ve been following the gaming blogs lately, you may have come across the semi-NSFW video of a scantily clad, giftedly-bootied model called Tahiticora suggestively playing a racing game on the XBox (video after the jump). The video has gone viral: since it was posted on YouTube on February 19th, it has already netted more than 150,000 pageviews.

But the video left many questions unanswered: Is it a viral ad of some sort? Does anyone really play XBox like that? And is Tahiticora really a bona fide XBox fan? Geekosystem investigates:We briefly chatted with Tahiticora (real name: Coralie Teraiefa), who said that:

So: now you know. Here’s her Facebook fan page and Twitter. If you are in need of a 5′ 6″, 34-27-35 model with long brown hair for some reason, here’s Tahiticora’s booking site.

Update, 3/2: G4’s Attack of the Show aired the video tonight as well.