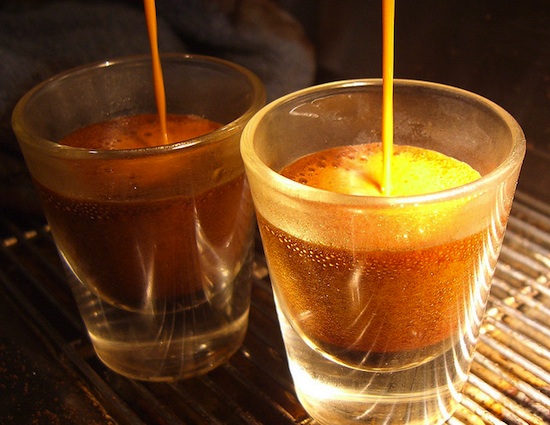 A recent study in the journal Investigative Ophthalmology & Visual Science found that heavy coffee consumption could be responsible for worsening eyesight among coffee drinkers, causing glaucoma in later years. It’s a good study, too, with a nice big sample size and analysis done over a long span of time. Here’s the only thing: I just don’t care. It’s not that I choose to believe the study is incorrect or anything. We all get to ignore a certain number of things in life for our own mental well-being, and I’m cashing in my card here. I will hear no ill spoken of my beverage of choice.

I don’t know what you could report about coffee that would get me to stop drinking it,but you’re going to have to do a lot better than “Your vision will get worse.” I’ve been in Coke bottle glasses since I could walk. What else you got? I’ll help you out: Nothing that’s going to slow down my pot-a-day habit, that’s for sure.

If a study came out tomorrow that coffee consumption causes out-of-control horn growth, I would throw out all my hats. If coffee made your lungs turn into gills, I would find a convenient underwater cave from which to conduct my affairs. The first of these affairs, naturally, would be devising a system for making French press underwater.

So, if a study of more than 100,000 Scandinavians shows that consuming more than a couple of cups of damn fine coffee raises the pressure inside of one’s eyeballs to unhealthy levels and can bring about the early stages of glaucoma, which can lead to vision loss, is that something I should be worried about? Frankly, almost certainly yes. I have a ton of respect for Scandinavians, who, like folks from the Pacific Northwest, drink coffee by the metric shitload in an effort to ignore the fact that the sun never seems to find where they live. An effort that works pretty well, might I add. There is pretty clearly a risk factor here, though, and one that really should concern me. My vision is already poor, and I’m on my fourth cup of the day as I type this. I can almost feel the pressure rising in my eyes, but I’ll be damned if I put my mug down like a quitter.

And as for the fact that drinking decaf seems to cut the risk substantially. Don’t even bring that up. The very notion sickens me.

I refuse to believe I’m alone in this. I know you’re out there, my brothers and sisters. I have seen you in the early morning lines, bleary-eyed and waiting. I have seen you striding down morning streets new cup in hand and an indefatigable smile on your face, secure that you are ready to face whatever the day throws at you because you have coffee — and maybe also because you can’t see what the day is throwing at you until its too late. So that’s where I stand, but what about the rest of you coffee drinkers out there? What would it take for you to actually give up your morning cup?