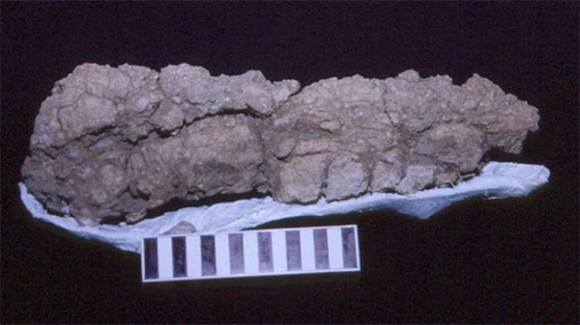 A long time ago, perhaps 65 million years or so, a Tyrannosaurus rex in what is now Saskatchewan, Canada ate another dinosaur, allowing me to show you this photograph of 100% genuine dinosaur poop.  This hunk of fossilized feces, or coprolite, which actually quite importantly supports the idea that the Tyrannosaurus rex was carnivorous, is being replicated so that its copy can be sent from The Royal Saskatchewan Museum to the Smithsonian Museum in Washington D.C.  The fossil actually contains the bones of another dinosaur, perhaps a “duck-billed dinosaur or a horned creature such as Triceratops” according to Live Science and will be featured in the Smithsonian Natural History Museum’s upcoming “Putting Dinosaurs in Their Place” exhibit.