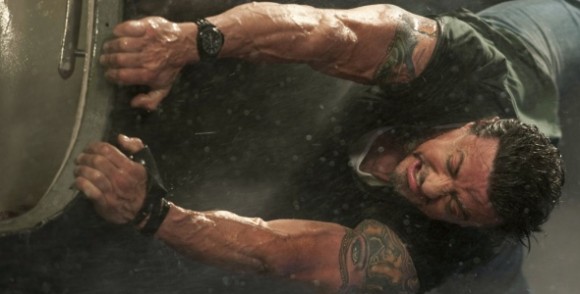 Sylvester Stallone is upset, you guys. Upset that action movies just aren’t what they used to be. You know, back when men were men, and so were action movies. Now it’s just a bunch of magic guys in tights who don’t participate in any real action because their magic make it too easy. And that’s not action. I mean, look at those freaking arms! Sylvester Stallone never let anyone do any CGI to him, I’ll tell you that.

But seriously, he said that action films are “fading away.” Has he not been to the movies at all in recent years? Man, he’s been working hard on Expendables 2, sequestered all the way up in that Tibetan mountain lodge, far away from civilization as we know it!

In an interview with Entertainment Tonight to discuss The Tomb, Stallone talked about how action movies just ain’t what they used to be:

“This genre unfortunately is becoming… let’s just say it’s fading away. You have the superheroes today which are possessed with all extraordinary powers; they can blink and a fireball comes out of there. It’s great. And then you have a bunch of us which is just your basic male-pattern badness. … Kind of like hands-on action.”

Oh, I see. Movies like Rambo and Die Hard were more, um, practical. But movies like the ones starring his fellow Expendable Jason Statham don’t qualify, nor do the ones starring the Man Who Will Never Stop Actioning Bruce Willis, who is coming out with Looper soon and was also in both Expendables movies. And while Nicolas Cage was not in any Expendables movies (“How am I not in this movie???”), he continues to launguish in the sleepy indie scene, doing nothing artsy fartsy stuff like the National Treasure franchise, Seeking Justice, Drive Angry, Stolen, Trespass, and Ghost Rider: Spirit of Vengeance, but that’s a “magic” movie.

I’m not going to snark on Sylvester Stallone for perhaps just not being the spring chicken he used to be and, therefore, not having the same appeal that he had in the ’80s. Because Stallone is, to me, always going to be Stallone. (Because seriously, look at his freaking arms! Those are real!) I’m also not going to say this is all about “man movies,” because I think Stallone is just waxing nostalgic for the macho heyday of the ’80s. (Who wouldn’t if it made them tons and tons of money?) I just find it kind of cute that he feels like we haven’t found our generation’s Rambo or Rocky, our “rags-to-riches” underdog story — and Captain America doesn’t count, because Steve Rogers has fantastical superpowers. (Honestly, that’s kind of why I’m not into Superman; he can just… do everything. Sigh.) Right now, superheroes are cool, the same way Rambo was cool. And sometimes Connor MacLeod is cool. And then the Terminator is cool. It’s the business of show, my friend. It’s a crazy ride. We might still find our Rambo.

But for now, we’re into the Avengers. Don’t worry — people will still totally see Expendables 2. (Because everyone in the world is already part of the cast, and they want to see if they look good in it.)