The Magicians Recap: Season Finale “Will You Play With Me?”: And the Monster Is … 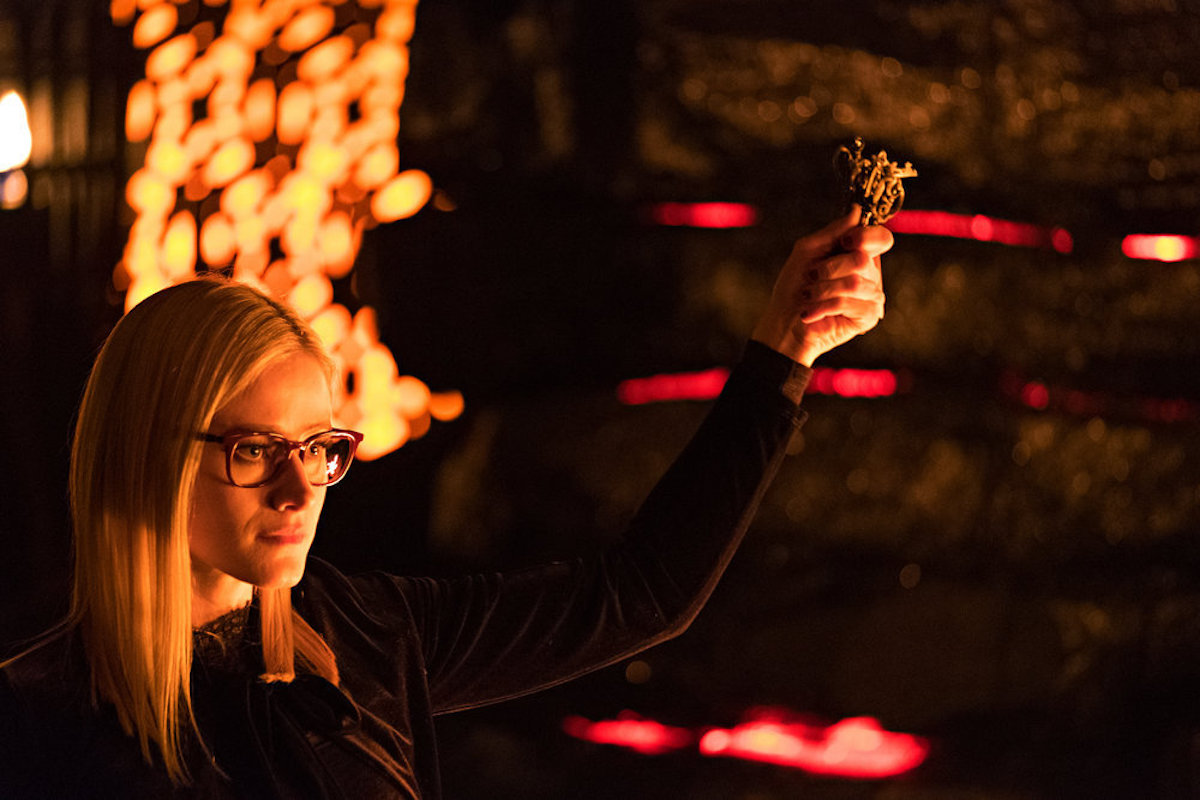 Having just watched The Magicians’ season 3 finale, “Will You Play With Me?” my raw reaction is that the true monster is regression, with a side of rigidity. Slavers are going to slave. Gatekeepers are going to gatekeep, but the biggest disappointment is that the people you love are going to be stupid. They are going to believe their own rationale that they’re performing a selfless act for the greater good, when they’re really doing something because they are frightened.

This season finale brought me back to the first season finale, but while the first season’s was bloody and swift, “Will You Play With Me?” is subtle and creeping, but leaves just as much destruction in its path. What I’m left with the most are questions for characters that I love, or really just one question for them: Why the F did you do that???? This question goes out to The Fairy Queen first and foremost, and then to Margo and Eliot. To be fair to The Fairy Queen, she’s an ordered good character who does what she must because rules are rules. So, it was more like: Don’t Effing do that!! than Why??? Because I knew why. She had to make up for going back on a deal.

I was hoping for some logical explanation as to why The Fae cannot break deals, like Peadar O’Gullian has in his book couplet, The Call. As of yet, there doesn’t seem to be one for The Fae in The Magicians, but that doesn’t mean there isn’t one. I hope the Fairy Queen isn’t gone forever, but it doesn’t look good.

I personally want the surviving human trafficker heiress, Irene McAllister, to die a slow painful death. Though I do hope I can also be as empathic as Fen to people who have done wrong.

In Fen’s scenes with The Fairy Queen, her kindness and forgiveness can’t be mistaken as weakness. However, The Fairy Queen seems to half mistake it for weakness anyway. The Fen and Fairy Queen scenes speak volumes about women and power, and how we relate to each other.

Fen is acting High King, and Tick and the Fillory royal staff is clearly underestimating her. Fen appears apologetic to said staff, but clearly is also getting what she wants and needs from them. She seems to have some larger idea in the works. Then, The Fairy Queen enters and tells Fen stop apologizing to her staff. Fen demands to know what The Fairy Queen is doing at her job. Whenever Fairy Queens have busted in on me at work and publically demanded I stop apologizing, I’ve wanted to do the same.

The Fairy Queen is clearly annoyed to see what she believes to be weakness in Fen. She sincerely wants to inspire Fen to believe in herself. However, despite The Fairy Queen’s intentions when she demands Fen stop apologizing, she’s really saying, Look at me! I’m such a powerful woman! I can tell this meek woman to knock it off and be empowered because I said so!

I think a lot of working Fairy Queens sincerely do want to help when they publicly demand a female coworker stop apologizing. I also think it’s sometimes passive-aggressive behavior disguised as empowerment or a little of both. I think, with Fen and The Fairy Queen, we see the little of both category.

It’s ironic The Fairy Queen reminds Fen she needs to be seen as strong right before she tells her that she’s about to make a huge sacrifice that Fen doesn’t agree with. I agree with Fen on this and thought The Queen’s decision was both tragic and unnecessarily rigid. But, as The Queen was deciding her own fate, does my opinion matter?

What is seen as strength to one woman may be viewed as weakness, or just a bad choice, to another. This is also true with men, gods, goddesses, and monsters in this episode. What’s true strength? What’s true sacrifice? Who gets to decide?

The gods and goddesses have made it an open secret that they believe they have the right to decide the fate of worlds. The library has made it clear they are the gatekeepers of magic and they get to decide who has access to it. Luckily, we have our heroic eight who will surely make magic open-source. Or will they?

I think I said once that the main flaw in many of these characters is hubris. If I were trying to trend, two years ago, I would go on about Millennials and over confidence and ambition. Luckily, it’s not two years ago, and I’m never trying to trend, and I would love for someone to explain to me how one generation can be both entitled and over-ambitious.

The truth is ambition and over-confidence has been the main flaw of many a hero over the years. It makes sense. People who are gifted with brains and magic would be confident. People who believe they’re good enough to lead and make decisions for others have to be confident, right? What kind of crazy world would it be if people who had earned nothing and had no skills believed they were qualified to decide what was best for everyone?

Anyway, it seemed like our eight characters grew out of their hubris after going through huge hardships on the show. No one has become less self-centered and humbled more than Quentin (Q.) Julia may be a virtually all-powerful goddess who choses to be sincerely humble, but Q has decided to put the group’s needs over his own ego. While Q wants to be a hero, it’s the hero’s deeds that are their own reward.

Novel writers have a bigger challenge in being written by one person 99% of the time. With Q as the main character, The Magicians novels suffered from this greatly. The Magicians’ show writers prove that these are the days TV can be a superior way to tell a story, as they have done a great job of not revolving the show around Q or any character too much. What the show did was strengthen the idea of friendship, trust, and community with all the characters.

But, what if that all got turned on its head? What if some of our beloved eight decided they knew what was best for their friends because they care about them so much? It would be tragic, right?

This is what the season finale “twist” ended up being about. So, is it ever good when our friends are our gatekeepers when we’re trying to open a gate? Sometimes. It depends on your point of view. If I were a god/goddess, I may think Julia (Official Goddess name Our Lady of the Tree) risking her goddess self to save some pitiful humans is tragic.

As Iris The Goddess said, why worry about a few fairies when you can create another world where they are never enslaved? It may be my provincial human mind, but it does seem like these gods seem to believe they can create these great worlds in theory, while the ones that actually result from that are pretty flawed.

While the world of The Magicians remains mostly flawless, I wish that the episode had led us to Eliot and Margo’s decision to protect Q a bit more. I get that Eliot/Margo (ElMar) have probably spent too much time as leaders. I get that they love Q and that Eliot remembers a whole life with him, but it still felt jarring that ElMar would deny Q a choice.

Maybe if I saw more panic or longing over Q with ElMar, as I did with Alice, it would feel less sudden. Alice’s choices make sense, though I don’t agree with her. She’s trying to be selfless in shutting down magic. She can’t see that her very decision comes from an entitled place, as ElMar was so good at pointing out but failed to see it in themselves. Alice’s admission of love for Q was bittersweet. But, she too was denying Q, and many others, a choice.

Should we be our friends’ gatekeepers? I would vote for Julia to be mine. The big difference between Julia and everyone else is Julia understands consent. This is a moot point, as the people who don’t care about consent are currently winning.

The Library is the gatekeeper. It will protect magic at all costs. Irene McAllister represents the worst and most common type of person that benefits from The Library’s type of gatekeeping. She’s a brutal human trafficker whose wealth and power only comes from the exploitation of others. The Library can believe it is neutral and only wants to protect knowledge, but McAllister is the only kind of person who can rise when a vacuum like the one created. I believe Dean Fog represents the world-weary intellectual who has lost hope that most of the world is capable of critical and rational thought. He then decides he must become part of this gatekeeping system. Really, an argument could be made that he lost his moral compass a long time ago, when he started resetting time loops. Our heroic eight, nor the rest of the world, could consent to this.

Next season, the world is now going to have to rely on another heroic eight, or a different version of them. Eliot’s fate is very much in question. I purposely don’t read spoilers or even know who is coming, or going, on the show. I hope the saving comes down to Penny Forty, Q, and maybe even Marina. In the meantime, the monster will play. I thought the monster had to be someone we already knew. In some ways, I suppose I was right. We have yet to see its “blind need.”