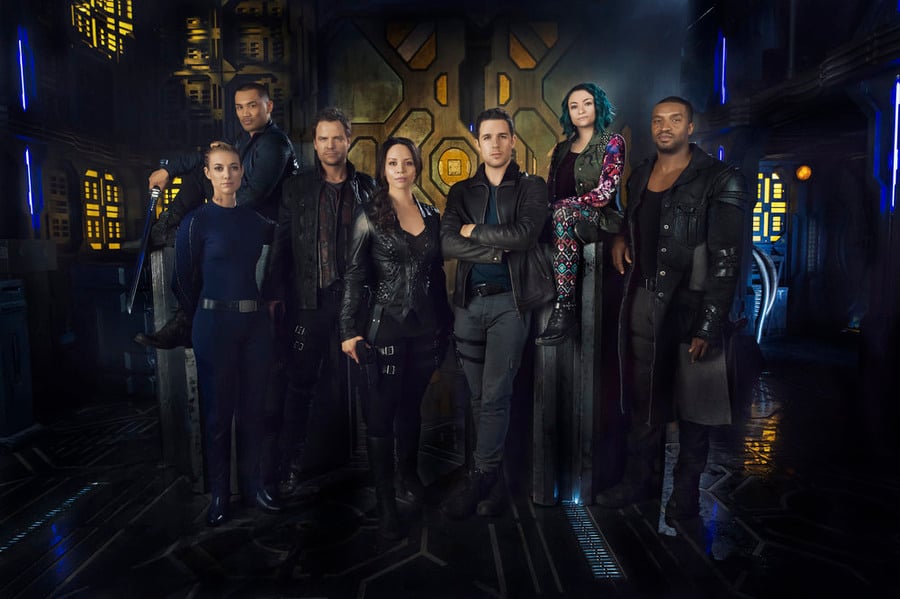 Dark Matter has officially been cancelled by Syfy, meaning that the third season finale is now the series finale. Its sister show, Killjoys, was also “cancelled” in a sense – but with a much happier caveat. Killjoys was renewed for two more seasons, but those will be its final two. The difference in outcomes was clearly reflected in the creators’ responses.

“To say that I’m incredibly disappointed would be an understatement,” Dark Matter co-creator Joseph Mallozzi wrote on his blog. “I’ll save my comments and field your questions in a future blog entry.  For today, I just want to extend a heartfelt thanks to my amazing crew, my wonderful cast, and to all of you, our incredible fans. You all deserved better.”

(This post made me particularly sad when I looked back at our first TMS interview with Mallozzi about Dark Matter. “I love the fact that [Cowboy Bebop] has a beginning, a middle, and an end,” he told TMS, “which is basically what I wanted for this show.”)

Meanwhile, Killjoys creator, showrunner, and executive producer Michelle Lovretta wrote, “This renewal is the kind of privilege every creator hopes for — a chance to plan the end of your story with the luxury of 20 episodes to do it. I’m immensely grateful that both of our network partners — along with Temple Street and UCP — have given our team, cast, and fans this incredible opportunity.”

Despite the disappointment around their own show, the cast and creative team for Dark Matter still celebrated Killjoys‘ renewal – as did many Killjoys fans.

Congrats to our brothers-in-airing, @Killjoys, on your big renewal! It’s been an honour sharing a night with you all. #Killjoys pic.twitter.com/dCwFhkFruB

Congrats to #Killjoys. Nothing but love and respect for @lovretta and her crew. Wish we were going with you! #DarkMatter https://t.co/dn1beiV4dW

Melissa O’Neil, who plays Two on Dark Matter, also posted the below letter on Twitter, thanking “every member of the creative and executive team on this joyful, inventive, totally down-to-earth-despite-being-far-out-in-space show” as well as celebrating the fans’ creativity, devotion, and sense of humor.

Anthony Lemke, who plays Three, posted the below video:

Lol, y’all are just letting it loose, huh? I love you savage-ass-bad-ass-ass-kicking-ass #DarkMatter fans for LIIIIFEEEE

Fans are calling for Netflix and other streaming services to pick up Dark Matter, but what do you all think? Had the show sort of run its course? Or were you ready for more?

(Via Deadline; and Variety; image via Syfy)