You Know What Crazy Is? Crazy Is Syfy Making A 12 Monkeys TV Show 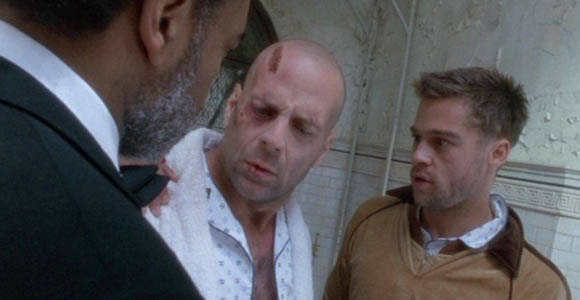 Wow, I did not see this one coming. Or rather, I might have missed it earlier. Either way, I’m surprised to read today Syfy is working on a television adaptation of Terry Gilliam’s 12 Monkeys. The film starred Bruce Willis and Brad Pitt and was ten kinds of awesome.

Feature film producers Chuck Roven and Richard Suckle from Atlas Entertainment — one of the production companies on board the Universal film — submitted the pitch, which is being eyed as a 90-minute backdoor pilot that would eventually lead to a straight-to-series order in a fashion similar to Syfy’s Battlestar Galactica. Terry Matalas (Nikita, Terra Nova, Star Trek: Enterprise) and Travis Fickett (Nikita, Terra Nova) will pen the script, with 24‘s Jon Cassar on board to direct.

How would a series translate the film’s plot? Syfy isn’t quite sure yet. “We have a great pilot, we’re now flushing out what the rest of the series might be,” said Syfy president of original programming Mark Stern.

I don’t see it being all that hard actually. There’s time travel aspects which could give lots of room for exploring two timelines, not to mention getting deeper into the underground society and all the forces at work there.

THR writes, “12 Monkeys comes as Syfy looks to beef up its original scripted fare following the  successful launch of pricey drama Defiance. The network is looking to add five to six new original scripted projects for 2014 to join Helix, which also was picked up straight to series.”

What do you think, are you down for a 12 Monkeys series?