Mac OS Running On A Microsoft Surface | The Mary Sue 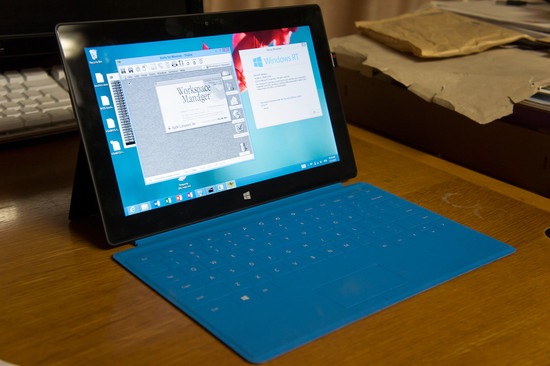 File under Things To Do Because You Can — make Microsoft’s new Surface tablet run a long out of date Mac OS. Dublin-based hacker Steve Troughton-Smith got a copy of Apple’s now antique Rhapsody OS running on a Microsoft Surface through a virtualization app. So yeah, this is more like an emulation, but it’s not an easy one, and we’re always willing to award point for creativity and amalgamations of hardware and software such as nature never intended, and this scores very high in both of those categories.

The hack was made possible by jailbreaking a Surface RT with an automated tool designed for that purpose, then running the Mac OS through virtualization app Bochs. It’s reminiscent of tethered jailbreaks on iOS devices, though, so it’s not persistent — every time you restart the Surface, you’ll need to run the jailbreak again to get things moving. Which is probably just as well — if you’ve got a fancy new tablet and everything, you probably don’t want it running an archaic, cross-platform OS as anything but a goofy trick or proof of concept.

Provided Microsoft doesn’t close the security loophole that allows these jailbreaks, though, you can expect to see more people performing tricks like this in the future, just to see what they can really make the Surface do. It’s to the company’s credit that they don’t appear to be in any hurry to shut down jailbreaks on the surface, though, and seem inclined to let people instead play around with the product they’ve purchased. What a sensible, pleasant way to treat consumers.