The Supernatural Cast Talked to Us About Driving Lessons, Dangerous Ladies, and Episode 300’s Plot 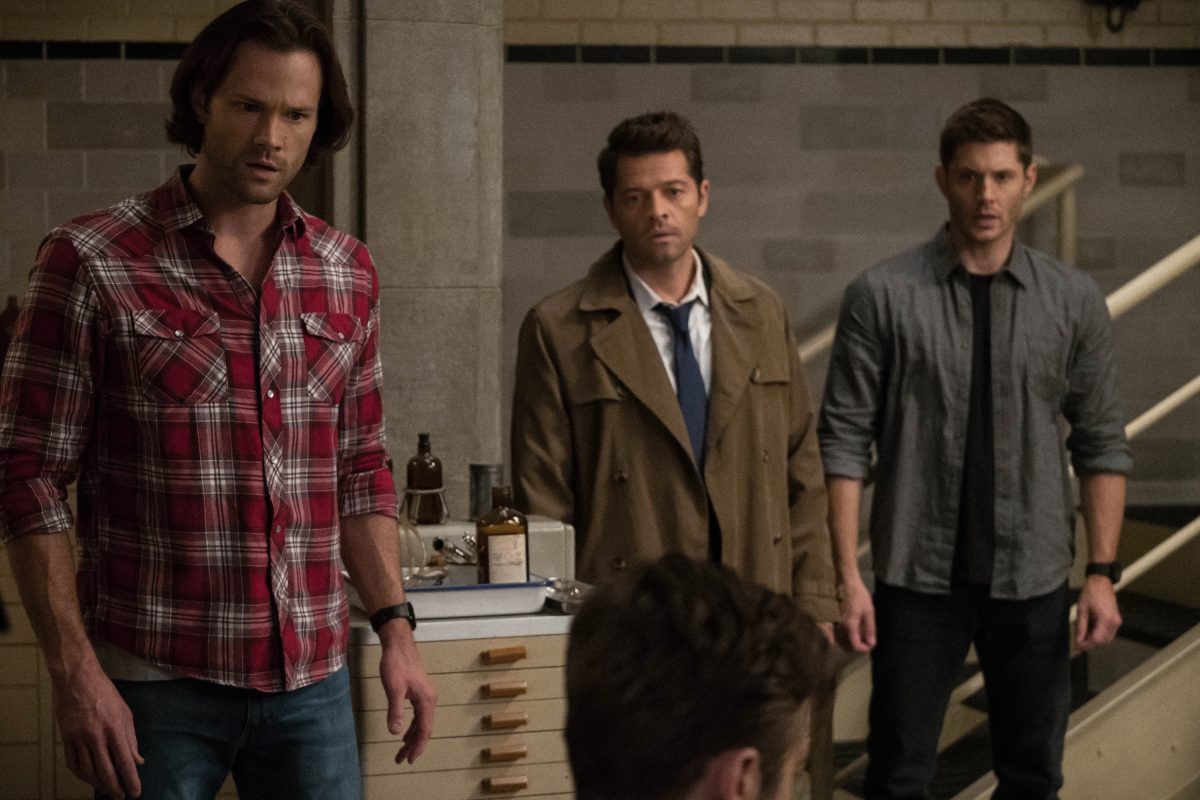 Last week, we talked about the party Supernatural threw to celebrate reaching 300 episodes, but we didn’t dig into plot details for what’s to come. Well, fear not, because we got teases aplenty from the cast and crew, leading all the way up to that milestone.

But first, the next episode: “Unhuman Nature.” (Turn back now if you don’t want to know anything ahead of time!)

It’s a tearjerking hour, with scenes that will inspire a thousand tumblr gif sets, and I’d rank it as one of the top episodes of the season so far. In case you don’t remember, episode six ended with Jack (Alexander Calvert) collapsing with a distraught Dean (Jensen Ackles) by his side. In “Unhuman Nature,” Dean joins with Jack’s other dads, Castiel (Misha Collins) and Sam (Jared Padalecki), to try to save the fading Nephilim, and it leads to some heavy stuff.

“You had to go to a place about what’s it like to lose a son,” said producer and co-writer of the episode Brad Buckner, explaining how all the guys end up as “grieving parents,” worried about Jack as they wait in a hospital. “Dean was so hostile to jack at the outset, so how’s he going to react to this? There was a ton of emotional stuff to work with.”

Eugenie Ross-Leming, the other writer of the episode, enjoyed the emotional scenes: “I always like things where Dean gets to show a little bit of tenderness coming through.” That tenderness leads to some of the best scenes of the episode, where Dean lets Jack drive the Impala and bonds with this pseudo-son. 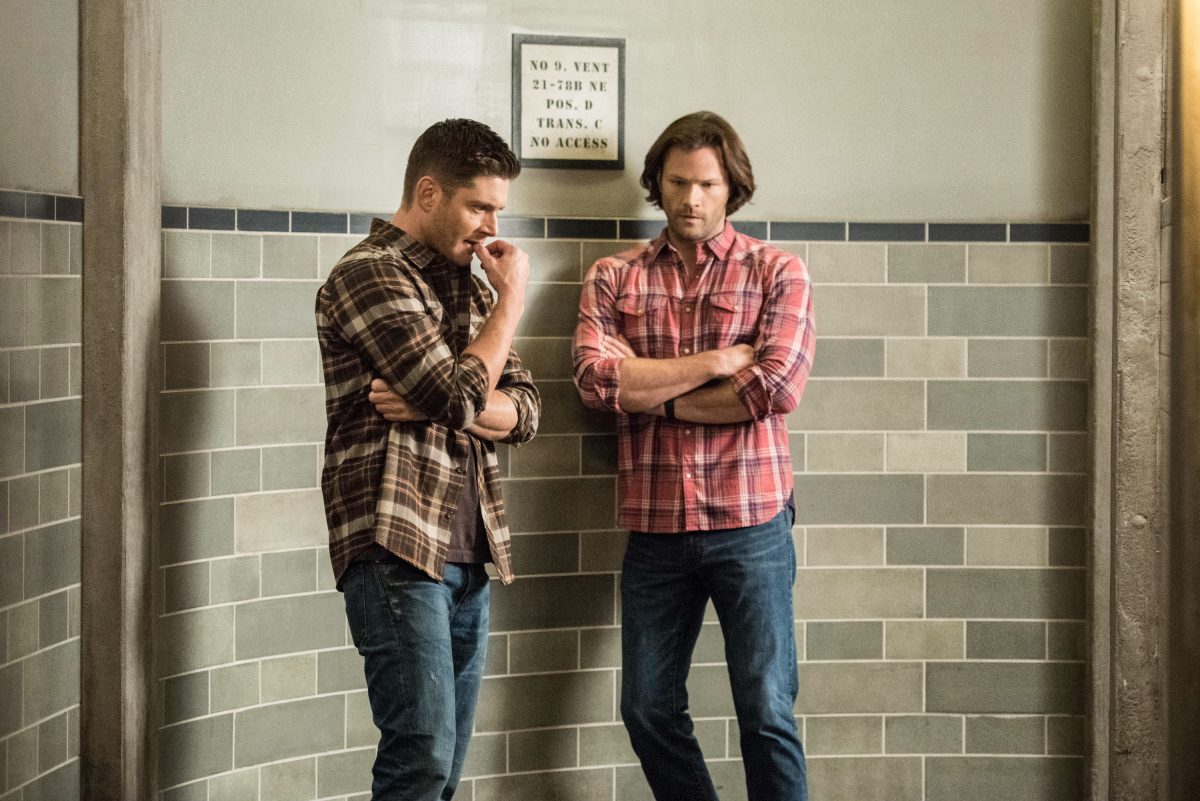 Driving the legendary “Baby” was “nerve-wracking,” according to Calvert: “I was pretty stoked though. I was visibly excited, so I think the acting part of ack being, like, fired up was like extremely simple for me to act.”

Much of that driving lesson was just Ackles and Calvert left to their own devices. “The beginning of that scene was written, but it was really great because we had either the camera mounted or the car chasing us,” Calvert shared. “We just had a lot of road to do what we wanted, so a lot of it was improvised.”

Another improvised bit that you won’t see in the final episode (but you may see on the post-production crew’s “Shaving People, Punting Things” channel) was how Calvert’s costars decided to dog-pile on him every time he fell to the ground. “I just had to keep falling over and over again,” Calvert sighed. “I probably fell like forty times within the episode, and uh, you know, I thought they’d get bored of jumping on top of me, but their enthusiasm for dog-piling never let up.”

He added, “I’m sending them my chiropractor bill.”

“It’s your worst nightmare scenario, but it changes quite quickly,” Connell shared. “She just genuinely took a shine to Jack.” We don’t see much of Rowena with the boys this episode, but Connell is hopeful we’ll see more in the future, especially Rowena’s relationship with Sam: “Sam is the only who’s gone through what I’ve gone through,” Connell said, “and he’s just got a squashy bun heart.” 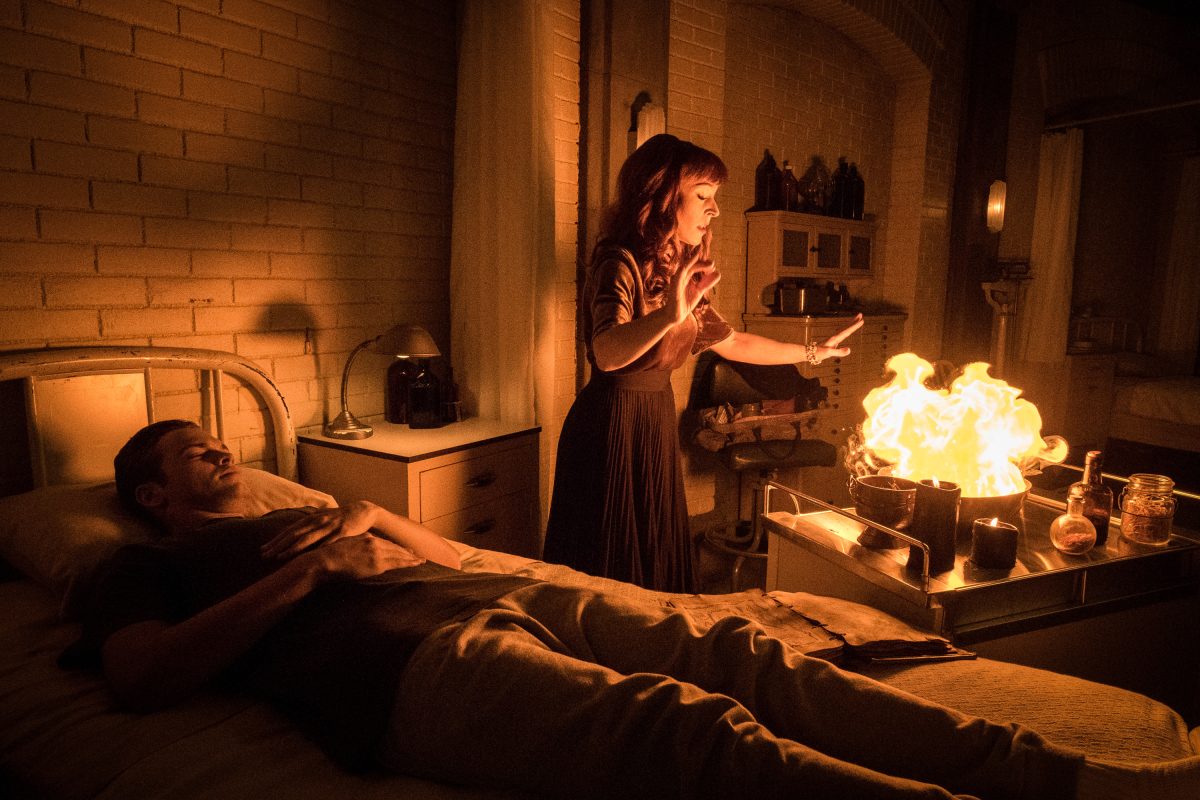 Not such a squashy bun: Nick (Mark Pellegino), the vessel of Lucifer who miraculously survived the archangel’s demise. We’ll see more of his story in the next episode, which was exciting for Ross-Leming: “I love writing Mark Pellegrino, and we’re so used to writing him as Lucifer, where he’s cheeky and villainous.”

However, playing a new character has been “challenging,” according to Pellegrino. Playing Nick “has a history and backstory that I feel I have to flesh out for myself, so that I’m actually saying what I say from a real place.” Pellegrino was surprised at the dark backstory we’ve learned for Nick this season. “I considered Nick from the fifth season to be a pious guy,” Pellegrino said, but it turns out “he’s more complicated than that.”

Pellegrino wasn’t the only archangel on the carpet. We talked to Richard Speight Jr. (Gabriel), who has also directed seven episodes of the series. “I thought I was gonna do one guest spot and go home,” Speight said of his first episode in season two. “It never would have in my wildest dream that I would still be here on this carpet … having conversations about the 300th episode, having died multiple times, having made friendships that I’ll have for the rest of my days, and having broken into directing. It’s crazy.”

Speight also got a second series out of the SPN fandom and family, Kings of Con, a crowdfunded look behind the scenes of fan conventions. And Speight has great news on that front: “I will say this: You will see more Kings of Con. We’re just solidifying the home for that.”

A lot of familiar faces will show up in the next few episodes, including DJ Quaills as werewolf/hunter Garth, and sunny sheriff Donna Hanscum, played by Briana Buckmaster, who will show up in episode eleven. In that episode, she’ll share scenes with Mary Winchester (Samantha Smith), something Smith is particularly excited for: “I couldn’t love Briana more. There’s not a lot, but I think that any strong woman would be very respected by Mary. And anyone who looks after her boys, she’s immediately in.”

Smith also commented on the developing romance between her character and the alternate world Bobby Singer (Jim Beaver): “Bobby and Mary lived through such adversity together in the AU; their relationship was forged with camaraderie and trust and friendship and teamwork. I don’t know where it’s going to go, but the relationship makes sense in the capacity to me.”

Smith added, “And obviously you don’t get better than Jim Beaver.” 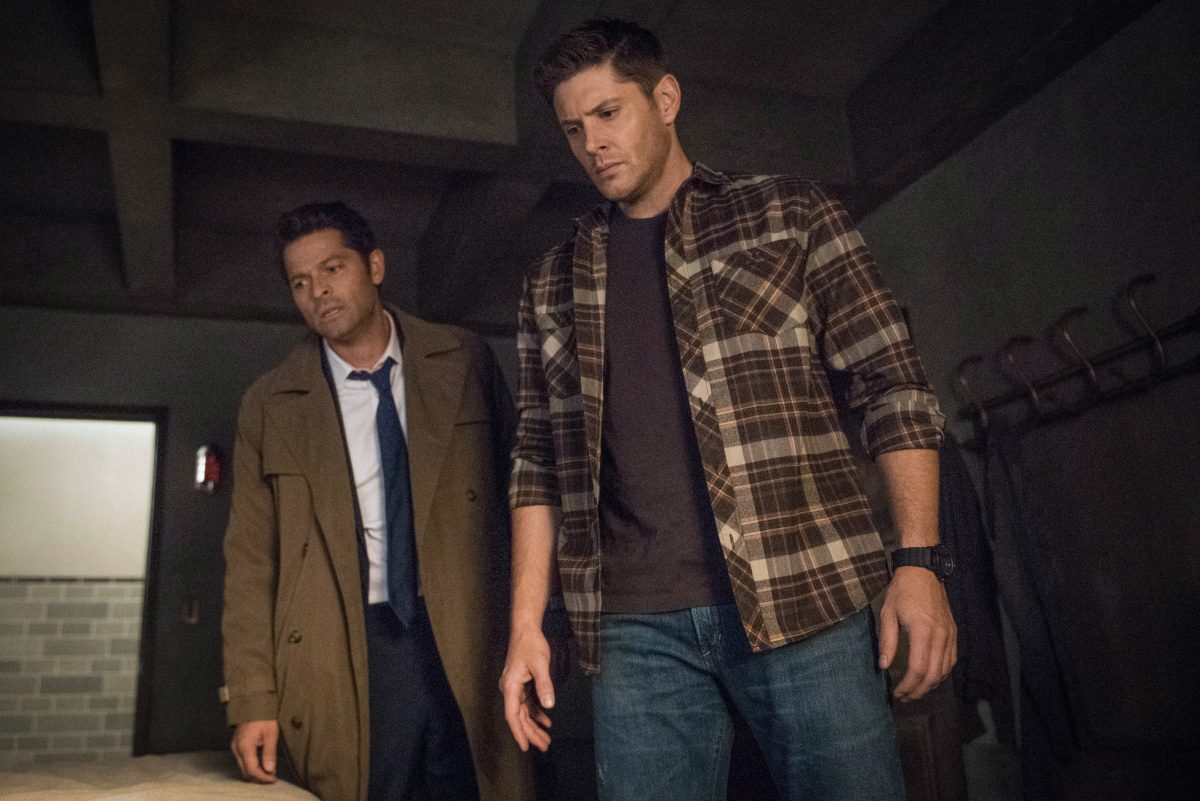 And speaking of ships, an internet favorite is the profound bond between Dean and Castiel, which we haven’t seen a lot of this season. Well, we have some good news for you on that end of things, according to Ross-Lemming: “There is one big scene coming up in twelve, that we wrote, that’s a big scene between Cas and Dean, and it’s an important turning point scene.”

Misha Collins also teased about Dean and Cas, “We have some stuff that’s coming up that will scratch that itch,” before talking more about how the Destiel phenomenon wasn’t ever something he anticipated when he joined the show. “I didn’t even know any of those terms when I got on the show. I’d never heard of fan fiction or slash fiction. The very idea of that was alien to me,” Collins said, but now “I actually kind of relish taking it in stride and being like, ‘Great. Awesome.’”

And “awesome” is something that can be said of the concept for episode 300. Written by Showrunner Andrew Dabb and Meredith Glynn, the episode will give us the perspective of the townsfolk of Lebanon, Kansas (the place the boys have called home in the bunker since season eight) on these weirdos in their midst.

Said co-showrunner and director of the episode Bob Singer, “They don’t quite know what these guys are. We’ll see the town for the first time, and then something happens that kind of turns the story on its head with a guest star that I think the audience will be happy to see.”

Supernatural airs Thursday at 8:00 on the The CW.